Monday was just the beginning. Tomorrow, we put more than 30,000 CTU educators and SEIU Local 73 SECAs, custodians and security guards in the streets for the schools our students deserve. And we won’t stop until we have everything we need to make this city better.

One of our wonderful families at Salazar Bilingual supporting the fight for a fair contract! #standwithCTU #faircontractnow #solidarity

For 13 years I’ve been teaching in Chicago. 13 years of budget cuts, no librarians, part time nurses, not enough counselors. 13 years of of promises from Mayors and CEOs to improve our schools. Yet, educators always do more with less. That is why the city continues to take. It knows that because teachers love our students we will always do our best, even with no resources.

We love our students so much that we don’t share our teaching stories with non-teachers willingly. We are cautious, we don’t want anyone to judge our students or us. We have pride in our schools. Our schools become our identities. Our kids are on our minds long after the bell rings. We reflect on what went well and obsess on what we need to improve.

Contrary to what I believed when I was a student, teachers have lives outside of school. We are parents, partners, taxpayers, and relied upon by many others in our lives.

So when someone dare calls us greedy it is a right hook to our face. How dare they? Our love for our students and our schools physically drains us. We don’t get enough sleep, we over eat, over stress because of our professions. We stay after the school day ends to grade, to coach, to mentor, for free. We give up our time with our own families for people’s kids.

UAW Local 722 workers in Hudson are on day 31 of their strike at General Motors (GM).

The UAW International Union announced earlier today, Wednesday October 16, that a proposed tentative agreement with GM has been reached and has been sent to the UAW GM National Council for Approval. The UAW GM National Council will meet tomorrow, October 17, to vote on whether to recommend the tentative agreement to the full UAW-GM membership for ratification.

The picket lines will continue until the strike is over. During the October 17 meeting, the UAW GM Council will decide whether to continue the strike until ratification concludes or to stop the strike at the time of the Council’s approval of the agreement.

We will continue to stand in solidarity and join UAW Local 722 on the line in Hudson. All are encouraged to join the picket line until the strike over.

Hot food, groceries, and size 2 and 3 diapers can be dropped off at 2200 Willis Miller Drive, Hudson.

Thank you to all Wisconsin AFL-CIO affiliates, councils, union members, and community members who have joined workers on the line in Hudson. Support has poured in from every corner of Wisconsin for UAW Local 722 striking families. Wisconsin AFL-CIO President Bloomingdale was on the line, bringing pizza to strikers and meeting with local leadership. Gov. Tony Evers tweeted his support. Lieutenant Governor Mandela Barnes, whose own father is a proud UAW member, joined striking workers. Wisconsin Senator Patty Schachtner walked the line. On Friday, October 4, The Western and Wisconsin AFL-CIO Building and Construction Trades Councils hosted a BBQ Cookout and Family Day, delivering groceries, diapers, and supplies for UAW Local 722 and rolled out the trailer with grills to cook brats for striking workers and their families. And many more Wisconsin unions, union members, and councils, in addition to community members, joined UAW striking families.

Your solidarity brings strength and resolve during an extremely difficult time for UAW members and families.

As the tentative agreement makes its way through the UAW process, we will continue to stand in solidarity with UAW Local 722 striking families in Hudson until the strike is over and all UAW workers are back on the job. 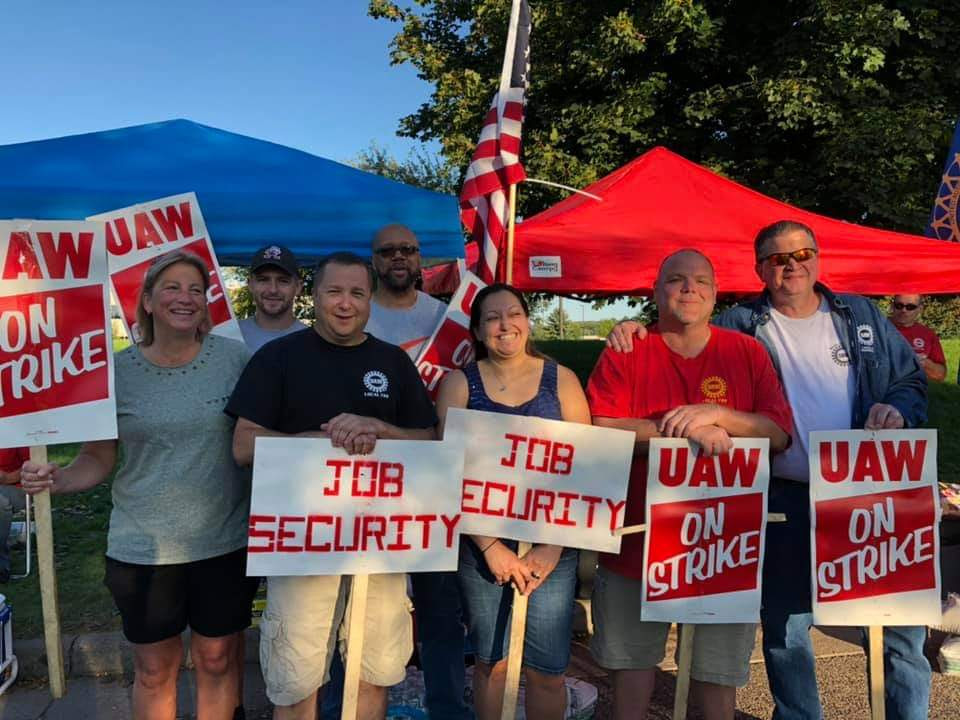 Members and allies are rallying on Monday, October 21, 2019 to tell ThedaCare – Appleton to put patient safety first and invest in their employees. The final offer provided by the employer did not address the core issues of negotiations – recruiting and retaining well trained staff to be able to provide quality care in a safe, sterile environment to our patients and community.

The staffing shortages have direct impacts on patient care and patient safety. They cannot fill the vacated positions fast enough to not be chronically understaffed, and when they do fill them, the new staff cannot be adequately trained, as the existing staff have too significant a workload to properly train.

Graduate students across the University will begin voting Tuesday whether to authorize a student worker strike, marking an escalation in the negotiation process that began exactly one year ago.

“This is our chance to make our voices heard loud and clear to the administration, and to declare forcefully that the Administration must move on our key issues we care most about and negotiate the contract we deserve,” the bargaining committee wrote in an email to its members Friday.

Successful strike authorization would not immediately trigger a strike, but rather would permit the bargaining committee to call for a strike when it sees fit.

Voting will begin Tuesday at 8 a.m. in Wasserstein Hall at the Law School. It will continue throughout the week in 21 locations across Harvard’s Cambridge and Longwood campuses, as well as the Broad and Ragon Institutes on MIT’s campus, according to the union’s email. Voters will fill out a secret paper ballot.

The email lists voting times through Friday, but more times may be announced as voting proceeds, according to bargaining committee member Ege Yumusak ’16.

All student workers who have signed a union card will be eligible to vote, and union cards will be available to sign at the polls, the email said. Student workers include former and current workers, as well as those who “expect to be employed by the university.”

University spokesperson Jonathan L. Swain reiterated the University’s position that the strike authorization is “unwarranted” in an emailed statement Tuesday.

In order to pass, the vote needs affirmation from a two-thirds majority of those voting — not the entire bargaining unit — based on rules set out in the UAW Constitution.

Beverley Brakeman, director of UAW Region 9A, which includes most of the Northeast, wrote in an email that this rule sets a higher standard for passage of a strike authorization than most other union decisions.

“Unlike other internal votes in the UAW, which are decided by a simple majority of those voting, strike votes have a higher bar,” she wrote.

Ahead of the vote, the bargaining committee emailed union members imploring its general membership to authorize a strike, but acknowledged that it was each worker’s own choice.

Brakeman wrote that while UAW will provide assistance running the vote, the HGSU-UAW elections committee will be in charge of the “process and final ballot count.”

“As with all other phases of the organizing and bargaining campaign, experienced UAW representatives will provide support, guidance and coordination to help ensure the process goes smoothly,” she wrote.

Several organizations across campus offered their support to the strike authorization effort ahead of polls opening Tuesday….

This is the first segment of AFGE’s 5-part series: The Secret Memo : Inside Trump’s Plan to Destroy Unions.

A leaked White House memo, as first reported by the New York Times and then obtained by POLITICO, outlines President Trump’s plans to destroy public and private-sector unions, get rid of worker protections, cripple workers’ ability to organize, and increase profits for corporate special interests.

This explosive 19-page document was prepared in 2017 by Special Assistant to the President for Domestic Policy James Sherk, who was previously a research fellow at the regressive, anti-worker Heritage Foundation.

The memo, laced with familiar half-truths and outright lies, is proof that AFGE has been right all along in saying that the administration’s true goal in making changes to personnel rules is to “end collective bargaining” in the federal sector. It’s right there in their own words.

Federal workers are featured prominently in this hit piece as the administration’s main target.

Also on the hit list are private-sector workers. Among other things, the memo discusses ways to make it impossible for workers to unionize. It details steps to boost corporations’ profits by cutting workers’ overtime pay and redefining workers as independent contractors. It explains ways to shield mega-corporations from being liable for workers’ poor working conditions in franchises.

The administration’s divide-and-conquer strategy with respect to organized labor is as disgusting as it is shameful. But it won’t work. Across this country, our members and the members of every other labor union are getting educated, organized, and mobilized.

As the largest union representing federal employees, AFGE will continue to resist the President’s mob mentality and disrespect for the federal workforce and the work they do.

Next week we will go into detail of the administration’s plan to end collective bargaining at various agencies, including DoD, VA, and TSA. 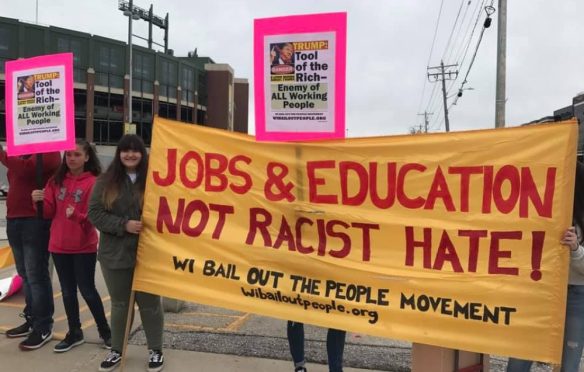 Photos from yesterday’s Stand Up for Education Justice Rally and March in Chicago in advance of Thursday, Oct. 17, 2019 strike deadline. Photos: Joe Brusky

Join us for a conversation and reading with Palestinian writer and human rights activist Yousef Aljamal. Local Milwaukee activists will be on hand to discuss connections between child detention in Palestine and the U.S. prison industrial complex, including migrant detention.

Yousef is on a speaking tour in the U.S. organized nationally by JustWorld International and we’re privileged that he is coming to Milwaukee. He grew up in a refugee camp in #Gaza and lived through the three major assaults that Israel launched on the Strip in 2008, 2012, and 2014.

Yousef recently translated into English the book “Dreaming of Freedom: Palestinian Child Prisoners Speak” and he contributed a short story to the anthology “Gaza Writes Back: Short Stories from Young Writers in Gaza, Palestine.”

Upon reasonable notice, efforts will be made to accommodate the needs of individuals with disabilities. For more information or to request accommodations, contact us at milwaukee@jewishvoiceforpeace.org

**Permission to use a library space does not imply library endorsement of the aims, views, policies, or activities of any group or organization.

I hope you are well and enjoying the equinox? Here at Just World Ed we’re hard at work organizing the “Palestine in Crisis” speaking tour we’re organizing with the great Gaza-Palestinian rights activist Yousef Aljamal.

We will share more details about Yousef’s tour, later. But planning is well advanced for him to speak– hopefully live!– at events in the NYC/Tristate area, Washington DC, Williamsburg and Richmond VA, Atlanta GA, Madison and Milwaukee WI, Portland OR, and Honolulu.

Do contact us if you’d like to help out at any of these events– or if you’re a media person from those areas or anywhere else in the United States who’d like to book Yousef for your show!

Yousef, who’s currently completing his PhD studies in Turkey, is a great communicator and a smart analyst who will be available to speak on three different aspects of the current Palestinian crisis: