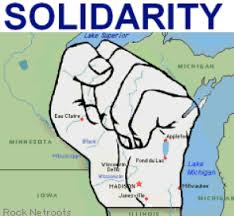 Less than a year ago the Tea Party was able to attract considerable publicity around a rally it held in Wausau, Wis.

High unemployment and foreclosures, plant closings, the virtual disappearance of family and middle-sized farms, and their displacement by larger factory farms had the people of this state angry and confused. But extreme right-wing movements are a sign of the weakness of the capitalist class, not its strength.

In just a few weeks of working-class action and struggle, a major shift in union and class consciousness has taken place here in Wisconsin.

It is instructive to briefly go over the history of this state. The land was stolen from the Native people, mostly the Ojibway, who had lived here for more than 10,000 years. That is where the name Chippewa comes from. Immigrants from Ireland and France began settling along the upper Chippewa River in the late 17th century.

The first natural resource exploited here was the pine — big, straight trees that produced the greatest lumber in the world. English lumber barons got rich off the labor of French and Irish lumberjacks like my grandfather.

Chippewa Falls for a while had the largest sawmill under one roof in the world. The logs and lumber were floated down the Chippewa River by river people, mostly French and Native men. V. R. Dunne, a Minneapolis union leader in the tempestuous struggles of the 1930s and a good friend of this writer in his old age, had been one such river person.

The exploiters cut the beautiful, straight timber, made their money and left relatively quickly. They left behind, however, another resource — the very rich soil. This was not flat prairies, like much of the Midwest, but small hills and valleys of rich grassland, perfect for cows and small family farms.

Soon there were more cows than people, and Wisconsin was the largest producer of milk and cheese in the country, exporting to other states and the world. Only in the area around Lake Michigan did much industry grow up.

Capitalist parties: no solution for the workers

Politically, the people of Wisconsin were very opposed to slavery and a plantation-type economy. The Republican Party was actually founded in Wisconsin in 1854. It was a new national party opposed to the spread of slavery into the Western territories. It soon had three divisions: a center, a far left and a far right — all with their own newspapers and followers.

The far right of the Wisconsin Republican Party eventually produced reactionaries like Sen. Joseph McCarthy and the John Birch Society. Out of the far left came the Populists and Progressives. This often led to great political swings in the state.

In that period, the Democratic Party hardly existed in Wisconsin, except during national presidential campaigns. The Republicans, however, had a strong social base among the farmers.

By the 1940s, Wisconsin’s economy was changing. The thousands of small dairies were being bought up by Kraft Foods. Soon small family farms were becoming large family farms. Later these were either absorbed by or became larger industrial farms that hired tens and even hundreds of laborers at low wages.

Industries began to develop in the Milwaukee area and the unions got a foothold there. Union members were able to get signatures to put Democratic Party candidates on the ballot. Auto and eventually computer factories came to the state, made a lot of money and have mostly gone elsewhere today. The Democratic Party, which grew in this period, has now grown weak.

Today hardly any family farms remain. Only a few specialty cheese producers and dairies that handle perhaps half a percent of Wisconsin’s cheese and milk production remain independent. Kraft Foods, however, has become a transnational corporation with $50 billion in net annual revenue and more than half its business outside of North America.

The Republican Party, which had been based on the farmers, is now a party of big capital. The Democratic Party has some people based in the unions. However, the industrial unions have been greatly weakened.

The election in 2010 of Gov. Scott Walker, a Republican who has launched a direct attack on the very existence of unions, was the result of people’s frustration with the failure of the Democrats to stem the growing capitalist economic crisis.

A union firefighter recently told me that he had voted for Walker because he thought at the time that Walker would bring jobs, while the Democratic candidate would not. But now he was out on the streets, protesting Walker’s attack on the unions’ right to bargain and organize.

Some think the uprising of the Wisconsin public workers has energized the Democratic Party. But U.S. Sen. Herb Kohl, a Democrat, never went to Madison and has said nothing about this struggle. President Barack Obama likewise has not spoken to the protesters or the teachers, only to a group of mainly Republican governors, telling them he understands their budget problems.

What strength the unions have at present comes from the public sector, like the teachers. If Gov. Walker is able to destroy the government unions, he will basically have destroyed the Wisconsin union movement.

But this is the past. Today the people of Wisconsin — union members, students and people from the community — are in the streets and have actually succeeded in occupying the Capitol for more than three weeks. They have gone around the capitalist political parties in their struggle, imparting a new consciousness that will