After two weeks in Puerto Rico, the Teamsters Disaster Relief finished their two-week long mission to bring the island back on its feet after it suffered the most devastating storm in modern history.

Yesterday, Now This released a video documenting the return of volunteer union members.

“I’m glad we were able to help, even if it was in a small way,” said Roy Gillespie, Joint Council 13 Human Rights Coordinator. “There’s going to be a lot more needed for the long term. They won’t be able to get back on their feet until everyone has clean drinking water, electricity, and all the stuff we take for granted. You go to stores, and the shelves are bare or there are still lines around the block.”

“When you’re at home watching this with your family, you can feel sorry about what’s going on there, but you have the luxury of turning off the TV and forgetting about it,” said Carl Gasca, a Local 174 Business Agent who was returning from San Juan. “These people will never forget about it. And the Puerto Rican people I met, they are truly wonderful people. They have a smile on their face, and they hope for the best but expect the worst.”

Jose Padilla is a Local 282 member that works for U.S. Concrete, and he has family on the island. As he boarded a flight, he reflected upon his time in the disaster zone.

“I felt good that I did this, and I’m happy that I did it for the proper cause,” said Padilla. “I’m proud that I was a part of this project, and I really hope that this island can recover. Now that this is over, the only thing I’m afraid of is planes – I really don’t like flying.”

Check out the video and share it with your coworkers and friends. 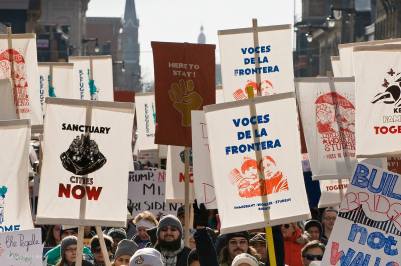 During the week of October 23-27, the World Conference of Mayors held a conference in the city of Detroit at the luxurious MGM Casino Hotel.

This organization is not to be confused with the United States Conference of Mayors which has existed for decades. The World Conference mainly consists of elected officials and other affiliates from small and medium-sized African American majority cities in the southern U.S. along with some representation from Africa, Canada and the Middle East…

Another highlight of the week of action was the “Real Detroiters Speak Out” town hall meeting held at the Historic St. Matthews-St. Joseph’s Church on Woodward Avenue on October 26. Over twenty people from various community organizations addressed a capacity audience on the profound problems facing the city.

It is outcomes of such coalition and movement-building activities that solutions to the crises will emerge. At the root of the social problems of Detroit and other major cities is the decline of the capitalist system.

The present administrations holding power in the municipalities, state governments, Congress and the White House are a reflection of the inability of the prevailing economic system to resolve the fundamental needs of the people. The only solution is socialist reconstruction which would transfer the wealth generated by the working and oppressed communities from the capitalist ruling class to the masses.”

To: Anti-fascist and anti-racist activists and allies, especially anyone who was present in Charlottesville Virginia on August 11 or 12, 2017

In the aftermath of this summer’s white supremacist rallies and attacks in Virginia, local and federal law enforcement are contacting anti-fascist and anti-racist activists and others who were in Charlottesville on August 11 and 12, 2017.

Everyone we have been in touch with directly has agreed to the above information being shared on their behalf in the interest of transparency and in the spirit of solidarity.

Many people have been calling for the state to prosecute fascists for the extreme violence, terror, and injuries inflicted on August 11 and 12. We recognize that in light of this some people may be considering sharing information with various law enforcement agencies for the purpose of prosecuting the fascists, and that some people have already done so. In this moment we would like to encourage everyone considering “helping” the state’s investigation of fascist violence get legal advice before deciding to talk to any law enforcement agents. We suggest that people start from the presumption that any information shared with law enforcement will be used against other anti-fascists & anti-racist activists, and that everyone keep the following points in mind:

We would like to remind everyone of your rights when interacting with law enforcement:

We recommend the following:

For these reasons we recommend that no-one speak with law enforcement. If you have already done so, contact a lawyer as soon as possible for assistance moving forward. If you have been contacted by law enforcement and are considering speaking with them, don’t do it without first contacting an attorney to privately discuss these issues and to decide how to proceed. Always use attorneys who have experience representing members of political movements during criminal investigations or defending activists with criminal charges.

We also encourage people to continue to be transparent about these developments as they occur – secrecy leads to isolation and feeds fear, which are both harmful to solidarity.

The best place to start to find experienced political attorneys to represent you in this context is to talk to other anti-fascist and anti-racist activists and the organizations you’ve been working through. It’s a good idea for groups to line up a suitable lawyer or group of lawyers in advance.

Also, your local NLG Chapter can provide assistance in finding political attorneys in your area: https://www.nlg.org/chapters/

Freedom Archives background on how grand juries have been used against political movements in the past: https://search. freedomarchives.org/search. php?s=Grand+Juries

For more on grand juries and the criminal legal process for activists in general we recommend: A Tilted Guide to Being a Defendant: https:// tiltedscalescollective.org/ full-book/

People should be clear that they should not, under any circumstances, lie to law enforcement. It is a crime to lie to the FBI. It may be to lie to other law enforcement even if not expressly prohibited. It is often considered obstructing justice and some places disorderly conduct.

Register for the conference today!

This year, the movement has seen everything from the inauguration of arch-bigot Donald Trump to the toppling of racist confederate statues. It has responded in militant action to the attacks on migrants, the LGBTQ community, Black lives, and U.S. wars and sanctions abroad. We’ve watched in horror as colonized Puerto Rico and other oppressed nations suffer from global warming and genocidal policies, the murder of anti-racist activists and state repression of freedom fighters.

As the centennial of the Russian Revolution approaches, we are faced with an urgent need to unite and fight for our lives. The 50-year anniversary of Che Guevara’s martyrdom and the Newark Uprising offer critical lessons for going forward. Our comrades in the streets risking their lives to topple white supremacy need our support — a people’s army to back them up.

Workers World Party invites you to attend our 2017 conference in the heart of Newark, NJ (a short train ride from NYC) — one of the largest and most impoverished working-class cities in the Northeast, as well as a historic site of resistance. Hundreds of freedom fighters from across the country will gather to meet and discuss where our movement goes from here.

Join us for dynamic workshops, plenaries, cultural performances and more. As the battle against white supremacy continues to intensify, we are strategizing a path forward in the fight for socialism.

Register for the conference today!

“…It is the lack of maintenance that led to the collapse of the electrical generating and transmission systems. FEMA awarded $240 million contracts to a U.S. company for repairs — one of many such contracts — but the recipients do little other than pay their employees and distribute profits in the U.S.

Still, the communities are standing strong, serving hot breakfasts and offering medical, dental and educational services to their children, thanks to volunteer community labor.

The unions have opened “regional centers of solidarity” for their members and families where they offer everything from medical services to help with requests for material assistance. Restaurant chefs are providing meals to refugees and others. Almost all musical institutions and many artists are contributing their “grains of sand” — offering concerts and serenades, including to people waiting in long lines at banks.

The past stage of a supposedly happy and satisfied Puerto Rico waiting to be exploited by tourists and speculators has collapsed. Behind the scenes there is a Puerto Rico that is organizing itself to revive, building on its native roots to develop new institutions that serve the Puerto Rican people.”

Linda Backiel, a lawyer living in San Juan who is a longtime advocate for Puerto Rican independence, is a guest contributor to WW.