Steven’s Court Case this Friday; Drop the Charges on Steven Ceci and all the defendants from the Embassy Protection Collective!

We wanted to update everyone on long time Peoples Power Assembly member Steven Ceci, who was arrested several weeks ago at the Venezuelan Embassy.

Steven was charged with assault by Secret Service police, even though everyone clearly witnessed Steven being assaulted by a right-wing supporter of Juan Guaido.

The particular officer who insisted on the arrest and who brutally threw Ceci on the ground, was seen sporting a tattoo, that many claim is a popular symbol used by the neo-nazi and alt-right movement.

Demand all of the charges be dropped not only against Steven, but everyone who was falsely arrested at the Embassy for actually protecting international law.

If you cannot come to trial with us please call Washington District of Columbia US Attorney Jessie K Liu at 202-252-7566 and urge her to drop charges on all those arrested at the Venezuela Embassy. 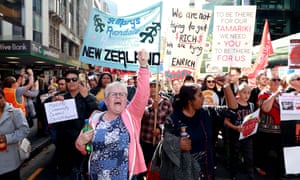 More than 50,000 primary and high school teachers have gone on strike in the biggest industrial action ever seen in New Zealand’s schools.

But Wednesday’s one-day strike is the first time primary and high school teachers have united in action, dubbing Wednesday’s protest a “mega-strike”.

The protesters have so far turned down three pay rise offers from the government of 3%, and say they want 15% or more to continue their work. But the government says it has no more money to give.

Khali Oliveira, a primary teacher at Gladstone primary in Auckland, said the strike was a last resort. Oliveira has been a teacher for more than 20 years and said burnout was becoming common-place. If the teachers’ demands were not met she would be forced to quit and work in the private sector.

“Teachers are overwhelmed and we don’t have time to teach. That is a huge struggle. And there is a huge crisis in New Zealand in terms of a teacher shortage. We want the government to invest in the future of teachers and the country’s children – we’re sick of Band-Aid solutions.”

More than 700,000 children have been affected by the strike, with many parents forced to take time off work, or take children to work with them. Some local recreation spaces such as libraries and swimming pools were running programmes for children while others were joining their parents in the protests….” 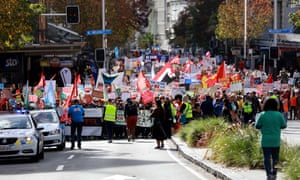 A new attack against Venezuela was demonstrated on Tuesday at the Conference on Disarmament in Geneva, in which the United States and some Latin American countries, which make up the Lima Group, boycotted the first meeting chaired by the Venezuelan ambassador, Jorge Valero.

Regardless of all their diplomatic maneuvers the US and “its docile allies” could not avoid Venezuela taking the Presidency of this important United Nations forum. The ambassadors of Argentina, Chile, Brazil, Paraguay, Panama and Peru decided not to attend the inaugural session of the Venezuelan presidency, which will lasts until June 23, while US Ambassador Robert Woods opted to leave the conference just before the session started.

“We are not going to sit there and listen to diatribes against the democratic values of the United States,” Woods told reporters after leaving the room, according to the news agency EFE. “This presidency can do whatever it wants, but it has no legitimacy because its government does not have it either,” the US diplomat added.

“We have to try to do everything possible to prevent that class of states from presiding over international organizations,” said Wood, the US ambassador on disarmament, after leaving the session in Geneva.

Disregarding US “regime change” operation the one and only Venezuelan government recognized internationally (by the United Nations) is the one lead by Nicolas Maduro.

RELATED CONTENT: US Senator Calls for Grenada-like Invasion of Venezuela

For his part, Valero said that the Venezuelan presidency will try to listen during the weekly meetings the conference will organize for all voices, and establish an “inclusive” dialogue.

In reference to the childish US childish he added: “We regret that the representative of the US and its docile allies continue to bring to this forum matters that are outside the mandate of the Conference on Disarmament…this is not a forum for coup-mongering.”

New York U. graduate-student workers and their allies protested for a fair contract in November 2014./ Michael Alexander Gould-Wartofsky

The National Labor Relations Board announced last week that it plans to propose a rule this fall that will establish whether graduate-student workers are covered by federal labor laws that grant union rights. Although the outcome remains far from certain, early predictions are that graduate-student workers will soon be stripped of bargaining rights. This development, part of a larger movement by the Trump administration to defeat labor unions once and for all, might be viewed by some college administrators as a victory. If it is, it’s a Pyrrhic one. To retain the moral authority of the university (and keep militant labor strikes off their campus), they should see the proposal for what it is and reject it.

Skepticism would be well founded, since the current presidential administration has worked to weaken — not strengthen — the position of higher education. From cuts in research funding to Draconian immigration restrictions that make it more difficult for colleges to recruit international students to the unprecedented step of levying taxes on university endowments, the federal government of the last few years has given administrators plenty to complain about. Do they sincerely believe that, in this instance, their pleas and objections for labor-board bureaucrats to respect the sanctity of the teaching relationship have hit home? That the representatives of management interests on the labor board have had a change of heart about the importance of a robust system of doctoral education and its benefits to society? …. https://bit.ly/2wpOlBf

https://www.prideparademke.org/ is the official website of Milwaukee Pride Parade. The parade route is on S. 2nd St. in Walker’s Point. Step off is @ 2 P.M.

Hotel workers were there. Teachers were there. And of course, nurses were there. They all rallied on the steps of the DC City Council Tuesday morning on a gloomy, rainy day, “not to beg, not to bargain, we are demanding that UMC be kept open!” said Katrina Clark, president of the DC Nurses Association. And Rev. Graylan Hagler called out the DC City Council for creating what he called “an apartheid healthcare system” in the city by closing hospital after hospital in poor neighborhoods whose residents are most in need. “Shame! Shame! Shame!” chanted the protestors.
The campaign paid off: in two amendments, the Council voted to restore $7 million to the hospital, working to make sure that UMC will be able to continue to serve patients in need. Council Chairman Mendelson restored $4 million, while Trayon White, Councilmember for Ward 8, identified an additional $3 million which was supported by Councilmembers Nadeau, Evans, Todd, McDuffie, Allen, Silverman, Bonds, Grosso and Robert White (Councilmember Cheh voted “present” to avoid a conflict of interest). While cheering the votes, DC Jobs With Justice Executive Director Elizabeth Falcon warned that “There is still more to be done to ensure full funding and services at UMC and any hospital that replaces it.” 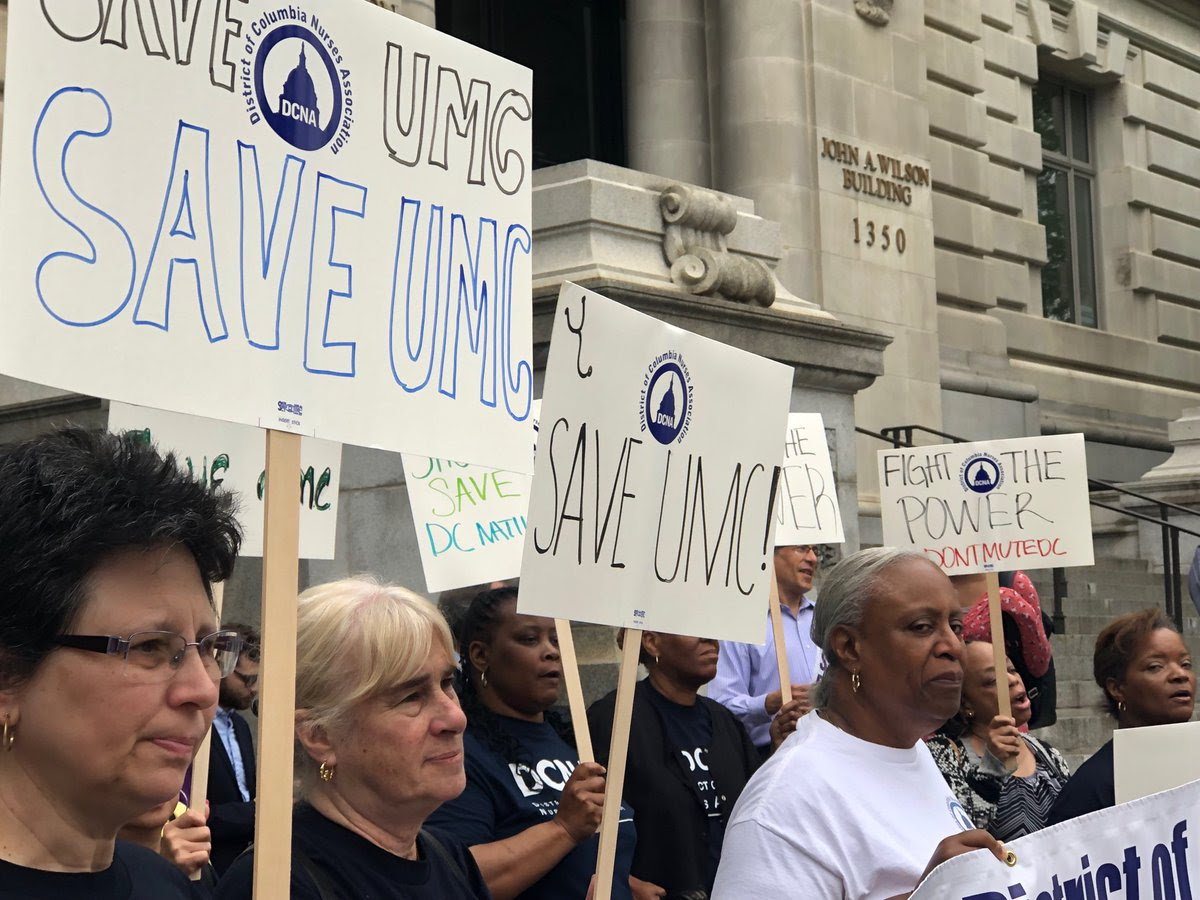 Racine 5/28/19 Vigil Protest for Pastor Betty Rendon and her spouse Carlos Hincapie who were kidnapped by ICE in early May, dragged in chains to numerous “detention centers” and deported to Colombia today. We will continue to resist! Stop ICE raids & deportations! No human being is illegal! No Borders In The Workers’ struggle! Si Se Puede!

This is the next preliminary hearing for Chrystul. The hearing starts at 9:30. We’ll get there by 8:30 and bookend the hearing with demos before and after outside the courthouse.

WHAT’S HAPPENING WITH THE CASE:

This will be a status hearing to see if any issues have come up and to schedule the next steps in the case. The last two hearings the judge ordered in favor of Chrystul’s defense. Her lawyers have been reviewing evidence from Kenosha police’s investigation of Volar’s child pornography activities. They expect this evidence to help them prove that Chrystul acted in self-defense. Judge Wilk released it over DA Michael Graveley’s arguments that Chrystul’s lawyers should not have access to it, so these have been important wins!

Also, last hearing, Chrystul requested that she not be driven down to Kenosha for these status hearings, because it’s burdensome to take a long bus ride and spend a weekend in the Kenosha County Jail. Judge Wilk allowed her to participate via video or telephone instead. She won’t be there, but her mom and support crew will!

A note on court etiquette: try to dress nice (doesn’t need to be formal, but presentable), take off hats when you enter the room, no using phones or talking while court is in session (when the judge is in the room). Some members of Volar’s family often show up, so we should try to sit together as a group. Be polite, but try to avoid interaction with them.

We want to show the judge and the DA that Chrystul is loved and missed, without making them feel disrespected or antagonistic.

Join The Picket Against Scott Walker – NO Union Busting VT

The VT Republican Party has invited Wisconsin’s former Governor, Scott Walker, to speak at a fundraiser with some VIPs shelling out $1,000 a plate. Our own Governor, Phil Scott, plans to be there to welcome him. Here’s why you should join the picket called by AFSCME, Vermont’s unions, and progressive organizations.

Walker is a Paid Agent of the 1 Percent. Billionaires Charles and David Koch and their pro-business front groups poured millions of dollars into Walker’s Gubernatorial campaigns in Wisconsin.

Walker Busted Unions. As Governor of Wisconsin, he enacted a law that stripped public sector unions of their right to collective bargaining and blocked private sector unions from collecting agency fees from workers they represent.

Walker Attacked Programs for Workers. He prevented any increase in the minimum wage, rolled back enforcement of equal pay protections, purged thousands of Wisconsinites from the state’s Badgercare health insurance program, and implemented massive tax cuts for the wealthy.

Walker Privatized Public Education. He carried out the largest per student K-12 education cuts in the nation and redirected public funds towards private charter schools.

Walker also opposes a woman’s right to control her body, is against efforts to reduce racial discrimination and to guarantee equal rights for all, and opposes proactive common sense environmental policies.

Unite to Stop the Anti-Union Right!

We must not let the Vermont GOP use Walker’s visit to import this reactionary agenda into our state. To endorse the picket and find out more information, contact AFSCME-VT Union Rep Dave Van Deusen at dvandeusen@afscme93.org.

You can also get updates on the Vermont AFL-CIO Facebook page: https://www.facebook.com/vtworkers/

All out to picket Scott Walker on May 30th and advance progressive pro-Union solutions that put working class people above profit!