This Friday, [July 26, 2019] in the framework of the XXV Sao Paolo Forum, members of the National Directorate of the United Socialist Party of Venezuela (PSUV) celebrated the 66th anniversary of the July Rebellion “Assault on the Moncada Barracks”.

In this sense, the PSUV member, Julio Chávez exalted the role of the Cuban Revolution for the promotion and consolidation of Bolivarian and libertarian thinking in Latin America and the world.

“The Cuban revolution became a luminous beacon for all humanity, for all the peoples of Latin America and the world that today wage a tenacious struggle against the hegemonic, imperialist stance of the United States of America,” said Julio Chavez.

Similarly, Julio Chavez said that although the July Rebellion was considered a military failure, it served as the beginning of a struggle that helped the Cuban people achieve their freedom and stability in the country.

“From the revolutionary forces they recognize and thank Cuba’s contributions, supporting the consolidation of the Bolivarian Revolution, to social justice, to the need for these territories to be declared of peace,” said the member of the red awning.

For his part, the member of the National Bureau of the Union of Young Communists of Cuba, Rosa Montero recalled that despite the latent threats of the United States Government to overcome revolutionary thinking, Cuban youth will continue to fight for their ideals driven by Comandante Fidel Castro.

“They intend to suffocate us economically, intensify their campaign of contempt against the Cuban Revolution. All this reaffirms the challenges of Cuban youth. We will continue working, defending the revolution, ”said Rosa Montero.

On July 26, 1953, more than a hundred young people, led by the leader of the Cuban revolution, Fidel Castro, staged a military action against the dictator Fulgencio Batista (1952-1959). Although the event concluded with the defeat of the rebels, this event was an impulse of the revolutionary struggle that triumphed five and a half years later.

We need YOU there to be a voice for the schools local kids deserve.

The Democratic Party presidential candidates will be coming to Detroit for a debate where many issues facing poor and working people cannot be addressed in a meaningful way while the many U.S. wars abroad and at home go unchallenged.

There will be a rally on July 30, organized by a broad coalition (https://www.facebook.com/events/459306721523008/), followed by a march to the Fox Theater. Join our contingent where we will demand:

STOP THE WARS AT HOME AND ABROAD!

HANDS OFF VENEZUELA, IRAN, N.KOREA, SYRIA!
U.S. OUT OF THE MIDDLE EAST AND AFRICA

HEALTH CARE FOR ALL! 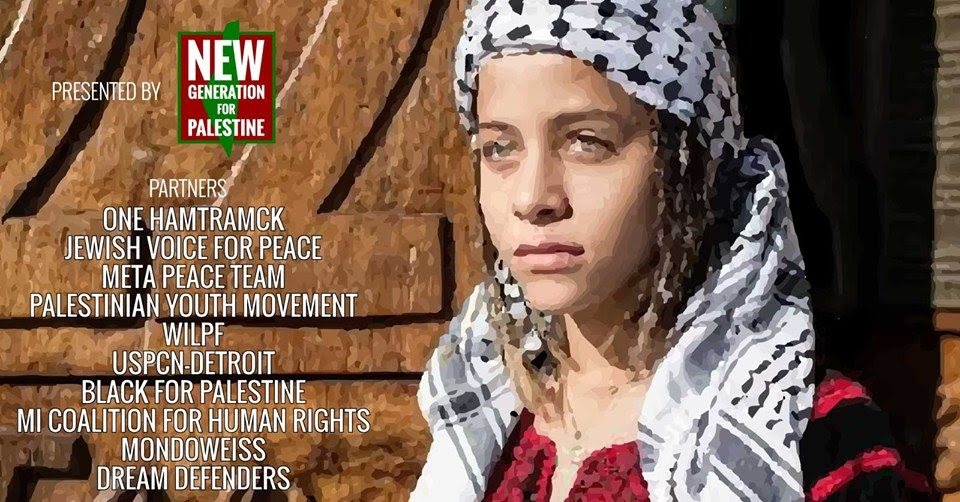 Janna Jihad Tamimi, 13 year-old Palestinian activist, one of the youngest accredited journalists in the world, and Ambassador of South African children’s rights organization (Shamsaan – meaning “2 Suns”) will speak in Dearborn during her month-long tour of the United States this month.

The event is presented by NGP, with partners:

Janna hails from the village of Nabi Saleh, in the Israeli-occupied West Bank, which from 2009-2016 conducted weekly protests against Israel’s occupation and confiscation of Palestinian land and resources. Janna is the cousin of Palestinian activist Ahed Tamimi, who was famously imprisoned after confronting an Israeli soldier. Janna will be on tour for the very first time in the USA.

Last summer Janna undertook a successful speaking tour to South Africa, where, among other things, she participated in Nelson Mandela’s centenary birthday freedom walk. In addition to her stop in Michigan, Janna is scheduled to speak on Capitol Hill and dialogue with noted personalities such as Dr. Marc Lamont Hill and Democracy Now’s Amy Goodman during events sponsored by Amnesty International, the IMEU, and others. But, primarily, Janna hopes to engage with broad sections of the American public, and especially with activists fighting for justice in their own communities, and with youth.

As a Palestinian child living through the brutal injustices of military occupation that impacts all aspects of her life on a daily basis, Janna began recording, reporting on and sharing her lived reality, from the age of 7, shortly after two of her relatives were killed by Israeli forces. Janna now enjoys a global following, serves as ambassador of the South African Palestinian children’s initiative, Shamsaan and has been awarded internationally for her media role. In a political climate where adults are inert with despair, Janna continues her passionate fight for the freedom of her people, stands up for human rights and speaks out against the various mechanisms used by Israel to violate the rights of Palestinians, particularly, children.

The event will include a director’s cut screening of the documentary film Radiance of Resistance featuring the Tamimi family followed by a discussion with Janna.

This event is FREE and open to the public.

Get tickets TODAY for Voces de la Frontera’s biggest fundraiser of the year! Get tickets at www.vdlf.org/gala2019

Amid the escalating threats of raids and familiy separations at the border and here at home in Wisconsin, now more than ever we need to come together to support our fight to defend immigrant communities.

Funds raised at our gala allow Voces to sustain and grow our efforts to defend and expand the rights of immigrant families, and helps us build the organizational capacity we need to win Driver Licenses for All, in-state tuition equity, get out the Latinx vote in 2020 and win just immigration reform!

Join us on Tuesday, August 20th at 6 pm to get involved with the efforts to decarcerate Milwaukee, #CLOSEmsdf, and #buildCOMMUNITIES.

This venue is wheelchair accessible.

The #CLOSEmsdf Campaign is now over 50 organizations strong. Visit https://closemsdf.org/ for information.

Demands from the #CLOSEmsdf Campaign Based on Newly Released Parole & Probation Report from Justice Lab at Columbia University:

On January 22, 2019, the Justice Lab at Columbia University released a scathing report commissioned by #CLOSEmsdf Campaign partner JustLeadershipUSA, entitled The Wisconsin Community Corrections Story. This vital report adds quantitative and qualitative analysis to support what directly impacted people and low income and people of color, especially Black and Native American, have known for decades: there is deep harm, and racial and economic injustice embedded in Wisconsin’s probation and parole policies which exemplify and fuel incarceration.

*1-in-8 Black men, and 1-in-11 Native American men, are under supervision.
*Black women are supervised at 3 times the rate of white women.
*Native American women are supervised at 6 times the rate of white women.
*MSDF imprisons white people 12 percentage points lower, and Black people 24 percentage points higher, than the Wisconsin average.
*Wisconsin incarcerates Black people at 11.5 times the rate of white people, ranking Wisconsin’s imprisonment racial disparities fifth in the nation.
*Wisconsin’s post-prison supervision rates, average lengths of stay on post-prison supervision, and rates of incarceration for technical violations are much higher than the national average and set Wisconsin as an outlier in the Great Lakes region.
*Across the country and particularly in Wisconsin, mass supervision fuels mass incarceration. As of 2017, people who had previously been under community supervision made up over half of the total adult incarcerated population in Wisconsin.
*Over one-fifth of all adults incarcerated in Wisconsin prisons were incarcerated without a new conviction.
*This massive expansion of Wisconsin’s criminal legal system resulted from truth in sentencing laws that cost Wisconsin taxpayers $1.8 billion.
*All of this harm is the product of deliberate policy choices over the past three decades. 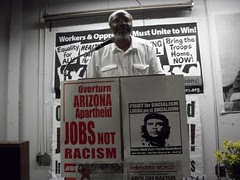 This year marks the 50th anniversary of the death of Frantz Fanon, a revolutionary thinker and practitioner who has had a tremendous impact politically on the African liberation struggle both on the continent and in the Diaspora. The recent outbreaks of strikes, mass protests and rebellions in Tunisia, Algeria and Egypt requires a reassessment of the significance of the events that Fanon participated in during his lifetime as well as the views expressed through a series of articles and books published in the 1950s and early 1960s.

Fanon’s views on the nature of the psychology of the oppressed, which he studied systematically in France and in North Africa, his analysis of social class formations in colonial societies, attempting to gage the response of these classes to the developing revolutionary struggle against imperialism and for the construction of a socialist society, and his impact on continuing political movements that have arose since his death, such as the African American movement of the 1960s and 1970s, should be extended into the current period in examining the U.S. occupation of Iraq and Afghanistan, the political upheavals in North Africa related to the influence and presence of United States military forces in the region, as well as the escalating struggles of Africans in the Diaspora, who are battling daily against intensified oppression, exploitation and racism.

Before we can make the case for not only a re-examination of Fanon’s works, but a broadening of his influence within the African world community, we have to look at both the political context under which Fanon produced his most significant theoretical formulations and how this context represents a continuation of struggles against U.S. and European imperialist domination in North Africa and the Arab Peninsula.

Also we must examine the extension of that same struggle of fifty years ago to events taking place today on a global level. Even though the form of struggle has changed, the underlying causes for the intensification of military interventions by western imperialism, is clearly an effort to re-gain the perceived losses of the anti-colonial period beginning with the close of World War II.

Born in the Caribbean island of Martinique in 1925, Fanon was a social product of French colonialism. During the post-World War I period there was a monumental upsurge in political violence throughout the colonized world. In the Caribbean and the United States, the influence of Marcus Garvey was paramount….