During the week of July 24, the Milwaukee Teachers’ Education Association (MTEA) publicly released a membership survey where the majority of the membership rejected to open up their current 2011-13 contract to give more concessions. Based on the member’s vote, the MTEA Executive Board decided not to pursue any additional concessions.

“Undoubtedly, some critics of public education will use the survey to continue their scapegoating of teachers and our union. We know we did not create the financial crisis in the state. We did not cut over $80 million from MPS. We did not create the unfair state funding system that has underfunded MPS for decades. Nor did we create the private voucher program that takes $50 million from MPS annually… I hope the energy of the protests this past spring in Madison and the enthusiastic involvement of MTEA members in the upcoming recall elections will continue to inspire us in the work ahead,” wrote Bob Peterson, MTEA President, in a letter to members after the survey results were tabulated (http://www.mtea.org/home.nws). 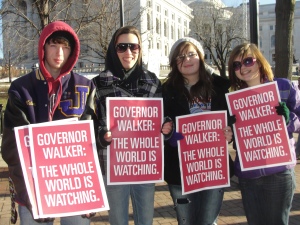