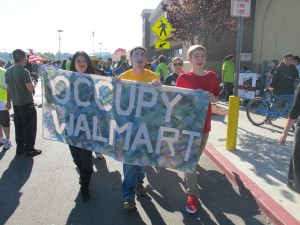 At the Walmart in Paramount, Calif., The Huffington Post counted about 600 protestors at 11:30 a.m. Friday. Organizers later said that a total of 1,500 people participated in the protest. Nine people were arrested for sitting in the street, which was blocked off for protestors. Arrestees included three workers, a father of a worker, a former worker, two clergy and two supporters, according to organizers. (Huffington Post photo).