“…This election year of 2016 is marked by a total absence of discussions and debates by the Democratic and Republican presidential candidates over the status of African Americans and oppressed peoples inside the U.S. Should there be a new push for renewed legislation as opposed to a greater emphasis on mass civil disobedience, boycotts, urban rebellions and general strikes or combination of all of these tactics aimed at total equality and full national liberation? What is obvious is that the present system of declining capitalism and imperialist militarism offers no future for the African American people and the working class in general.

Only the realization of socialism where the people control the means of production will there be any possibility of eliminating racism, national oppression and economic exploitation. There can only be freedom for the oppressed with the expropriation of the ruling class and the radical redistribution of wealth to the working people.” 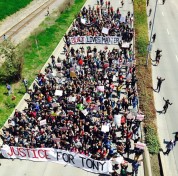