Skip to primary content
Skip to secondary content
Shut Down Trump In Janesville
Get ready to tell Trump that his racism and hatred are not welcome in WI!More details coming soon.

This is the livestream of the anti-Trump #HostForHate action in which people are risking arrest to stand up for love in the face of hate.

The following are statements from members of Groundwork, the SURJ group in Madison WI, on their reasons for taking action today against Donald Trump.

“…Nobody should be under the illusion that the people of this dignified and selfless country will renounce the glory, the rights, or the spiritual wealth they have gained with the development of education, science and culture.

I also warn that we are capable of producing the food and material riches we need with the efforts and intelligence of our people. We do not need the empire to give us anything. Our efforts will be legal and peaceful, as this is our commitment to peace and fraternity among all human beings who live on this planet.”

“Racism can’t be voted away, our fight is in the streets!”

On ‪#‎PrimaryDay‬ we fight to abolish capitalism, defend Black lives, and for socialism!

The Holiday Inn in Janesville, WI is hosting Trump this coming Tuesday.

His campaign events have become sites of violent attack where supporters push, shove, beat, and grab youth and people of color in the audience with Trump’s encouragement. Wisconsin protest organizers have begun receiving death threats from Trump supporters and white supremacists.

Join us in a rally Monday night at 6pm in the Holiday Inn parking lot to show that we willl not allow Trump’s hate, racism, and violence in our community. We don’t want anyone to be killed or harmed in Janesville.

Just a few short weeks ago, over 100 farmworkers from Immokalee — joined by 400+ consumers from across the state of Florida — wrapped up the Workers’ Voice Tour in Palm Beach, Florida, with an unforgettable march through the heart of the exclusive island community.  With one voice they declared to all that would hear: Boycott Wendy’s!

The workers and their consumer allies declared the national boycott for three principal reasons:

1) Wendy’s is profiting from farmworker poverty by holding out while all its major competitors joined the Fair Food Program years ago;

2) Wendy’s has chosen public relations over human rights by releasing an empty, toothless code of conduct in response to the FFP’s award-winning, enforcement focused, worker-driven approach to social responsibility; and

3) Wendy’s abandoned the Florida tomato industry after the implementation of the FFP and shifted its purchases to Mexico, where human rights violations are endemic and effectively unchecked.

It was the third reason, of course, that truly set Wendy’s apart from all other major food retailers yet to join the Fair Food Program, and made this month’s declaration of a boycott all but inevitable. 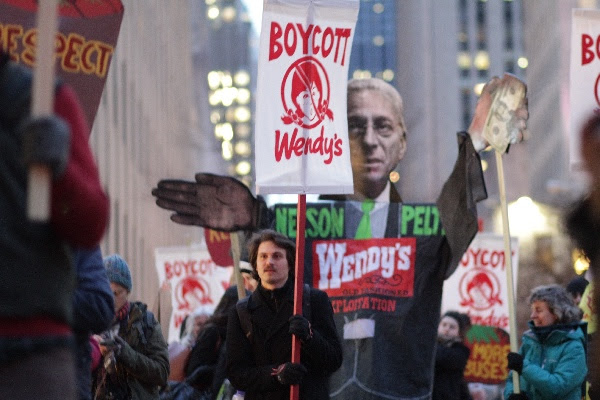 But it is one thing to run away from the most widely-respected social responsibility program in agriculture today — Whole Foods called the Fair Food Program “the leading worker welfare success story in the U.S.” just this past week — into the arms of an industry in Mexico known around the world for the prevalence of child labor, sexual abuse, and forced labor there. It is another thing altogether to make one of its most notorious growers one of your key suppliers. […]

And so was born the Month of Outrage.  Building on the massive wave of energy generated by the tour and the launch of the boycott, the Fair Food Nation is dedicating the next month to letting Wendy’s know that the longer the fast food giant waits, the stronger this national boycott will grow…

Find out how you can join farmworkers in taking action in the Wendy’s Boycott over at the CIW website!

CNN will host a “Town Hall” with the three remaining Republican Presidential candidates in Milwaukee on Tuesday at 7 pm. Protest will begin at 5 pm.

Shut Down Trump In Janesville
Get ready to tell Trump that his racism and hatred are not welcome in WI!

As a hotel chain that insists it “doesn’t tolerate racial discrimination” in its own practices, Holiday Inn should not provide its facilities to the Trump Campaign.

But beyond his discriminatory views, his campaign events have become sites of violent attack where supporters push, shove, beat, and grab youth and people of color in the audience with Trump’s encouragement.

Offering Trump a venue endangers Holiday Inn patrons as well as area residents who are planning to protest at the event.

Holiday Inn should not be host to hate. Please cancel the event. Otherwise, it is sending a clear message to would-be patrons about where the company stands.

These brave queer and trans North Carolinians are surrounded by police RIGHT NOW and facing arrest for shutting down the street at NC Governor’s mansion.

UPDATE: 6 people have been arrested.

If you can help with legal costs, donate at www.durhamsolidaritycenter.org/bondfund