Hosted by Fight for $15 Wisconsin

We’re fed up with lawmakers who have blocked minimum wage increases and gutted union rights. Join us this Labor Day, September 4, along with Fight for $15 workers in over 300 cities going on strike and declare that America Needs Unions!

Good union jobs in factories once created stable, secure work that allowed families to thrive. Hospital work and other service work is now the backbone of our economy, but too many Americans who work in these jobs are falling behind, so for the first time ever, non-union hospital workers will be joining us in the streets!

Protests will kick off early Labor Day morning! Stand with us and let’s come together to demand justice in our economy!
RSVP – Share – And Spread the word! 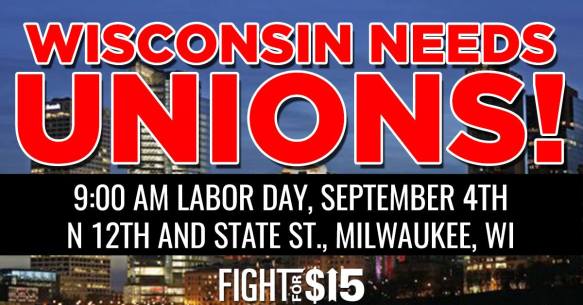