Coming to Durham or planning a local action? Let us know using this form: http://iacenter.org/supportsep11-17durhamweekofaction/

An informal alliance of national, regional and local organizations are pulling together a national call for a coordinated week of actions to topple white supremacy and state repression from Sept. 11-17, in the wake of events in Durham and Charlottesville.

Tuesday, Sept. 12, will be the first court date for activists who allegedly toppled a Confederate statue in Durham, as well as the one-month anniversary of the righteous resistance to white supremacists in Charlottesville and the murder of anti-fascist protester Heather Heyer there.

In Durham, Sheriff Mike Andrews has been attempting to intimidate the movement by targeting activists allegedly involved in toppling the statue on Aug. 14, and others involved in protesting at a planned Ku Klux Klan rally on Aug. 18. The activists who have been arrested so far have court dates on Sept. 12 and Oct. 11.

We are asking for folks who can to come to Durham for the 12th as well as organize local actions in their cities to protest monuments of white supremacy (whether they be statues, prisons, police brutality, etc). The vision is to spark hundreds of actions, and find hundreds of new organizers.

In the wake of the violent attacks in Charlottesville by organized Neo-Nazis, white supremacists, and the KKK, with complicity from the police, we are calling for organizations and individuals to join this call to smash white supremacy!

Actions across the country have shown that now, more than ever, is the time to take bold and courageous action. We must act now to counter the rise and emboldening of white supremacists in our communities and in the state.

Tuesday, September 12th is the one-month anniversary of the the murder of anti-racist protester Heather Heyer. It is also the court date for the courageous young people in Durham, N.C., who pulled down a confederate monument in their city. On September 12th, organizers are mobilizing in defense of these arrestees and the Durham community. Will you join them by coming to Durham and/or planning a solidarity action in your city?

In Durham, Sheriff Mike Andrews has been attempting to intimidate the movement at large by targeting activists allegedly involved in toppling the statue on Aug. 14, and others involved in protesting at a planned Ku Klux Klan rally on Aug. 18. Andrews has been targeted by activists for allowing horrible conditions to continue at the Durham County Jail, where at least five people have died as a result and where, in the most recent outrage, prisoners are only allowed visits from their loved ones via video; and for his department’s collaboration with Immigration and Customs Enforcement.

The struggle against white supremacy in all its forms is just! The events in Charlottesville, followed by the action in Durham that toppled the Confederate monument, are part of a growing movement to combat some of the most heinous, racist sections of far right that have been emboldened by Trump. In response, cities across the country have preemptively taken down Confederate monuments — not because these politicians want to “do the right thing,” but because they fear rebellion and the strength of a united, multinational movement.

In spite of this, Trump’s bellicose attacks on our movement have continued — including the egregious pardoning of arch-racist Sheriff Joe Arpaio — providing an opening for the witchhunt by the Durham sheriff against anti-racist activists and for attacks from the far right. The days of action from September 11-17, both in Durham and around the country, will continue the march forward to tear down white supremacy. 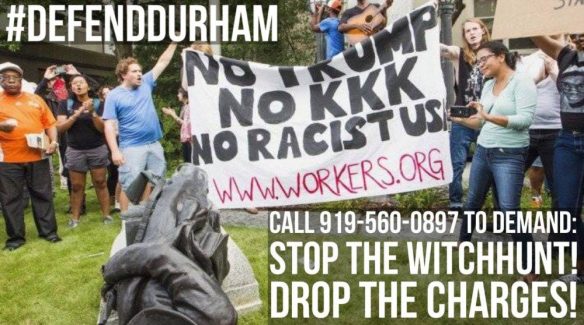