The Committee to Stop FBI Repression is supporting the following call.  Please forward to your networks.

Their charges stem from their participation in the courageous peoples’ removal of a Confederate monument on August 14, a bold response to the ‘Unite the Right’ white supremacist rally held just two days earlier in Charlottesville, VA. Heather Heyer, an anti-fascist activist, was killed and many others were injured when a neo-Nazi plowed his car into the demonstration – in addition to those hurt in other physical attacks by these forces against the protests throughout the day.

Durham Activists are issuing an urgent call for renewed solidarity and pressure on the Durham County District Attorney and political officials.  Call and say “This is an embarrassment to Durham, Stop Prosecuting Anti-racist Heroes and Drop the Charges!”

January 11 may be a critical day in the struggle that has unfolded in the aftermath of the toppling of the statue. After enduring months of court hearings, this is scheduled to be the first day of the trial on the charges against them. A continuance is always possible.
Here’s how you can help:

Send in a solidarity message from your organization to: info@defenddurham.org 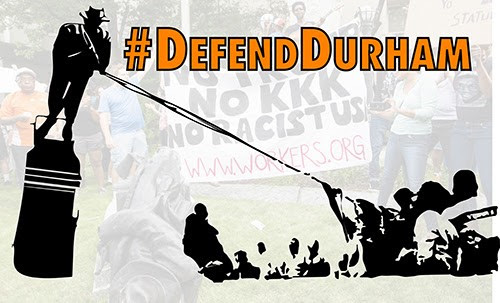