Join us on Tuesday, August 21st at 6 pm to get involved with the efforts to decarcerate Milwaukee, #CLOSEmsdf, and #buildCOMMUNITIES. The #CLOSEmsdf Campaign is now over 40 organizations strong. Visit https://closemsdf.org/ for information.

WHY CLOSE THE MILWAUKEE SECURE DETENTION FACILITY (MSDF)?
Conditions at Milwaukee Secure Detention Facility (MSDF) are out of step with Wisconsin values. Not only have conditions at the prison been deplorable for years, but the very notion of locking up people struggling with parole and mental health issues is at odds with common sense approaches to justice. MSDF was built in 2001 as a temporary detention facility for people on parole, probation, and extended supervision who allegedly committed violations in their rules of supervision. In the last 16 years, thousands of individuals, convicted of no new crime, have been re-incarcerated at MSDF—over sixty percent of them black men. This practice of “crimeless revocations” exacerbates racial inequities in Milwaukee and Wisconsin, and the inhumane conditions at MSDF violate basic human rights and defy our notions of justice and freedom. The #CLOSEmsdf Campaign is led by EX-Prisoners Organizing (EXPO), a project of WISDOM, with the support of JustLeadershipUSA, community members, and local Wisconsin organizations. The campaign aims not only to close this facility, but reimagine how we invest in people caught in the penal system. MSDF is beyond reform and must be shuttered in order to build the stronger communities that Milwaukee and Wisconsin deserve.

PROBLEMS FACING PEOPLE INCARCERATED AT MSDF
• Human rights violations, including: Poor ventilation, extreme heat, no access to sunlight, no outdoor recreation, overcrowding in cells, 22 hours of lockdown per day, and no in-person visits.
• Excessive mistreatment and use of force against mentally ill people.
• Racial bias: African Americans were 12 times more likely to be sent to prison for crimeless revocation than whites in 2013.
• No due process: Revocation process gives significant discretion to DOC parole agents rather than criminal
courts, which makes it harder for people facing incarceration to fight that outcome.

SOLUTIONS
• Ending the practice of incarcerating people for minor rule violations of their supervision.
• Allow people facing revocation to remain in the community until their hearings.
• Shifting the “Alternatives to Revocation” beds to the community.
• Solve overcrowding issues in Wisconsin jails and prisons through policy changes such as bail reform and increased use of Treatment Alternatives and Diversion programs.
• Reinvest the excessive corrections spending toward workforce development training for formerly incarcerated
people and greater access to mental health professionals and clinics within the community. 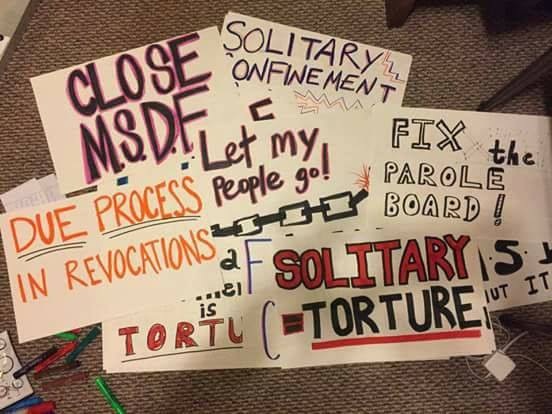