Despite the first major snowstorm of the year, dozens of community members from the Sheboygan area and beyond participated in a Comm-UNITY event January 19, 2019.

Sheboygan is an increasingly diverse worker’s city known for numerous people’s/labor battles including ones waged by the United Auto Workers Local 833.

“Welcome to the Sheboygan Comm-UNITY March 2019. We are inspired by the Women’s March 2019 and our march will be held the same day. We will gather at Fountain Park at noon, march, and convene at the Mead Public Library’s Rocca Room. At the library, there will be a variety of informational displays by different organizations in Sheboygan. It is our hope that you will take the opportunity to find ways to engage, volunteer, participate, organize, empower, network, and serve,” reads the Facebook event page.

Members of numerous organizations such as the AARP, the Crusaders Of Justicia, the Wisconsin Bail Out The People Movement, Veterans For Peace, children, union members, college students and professors from LTC and Lakeland College, artists, peace and justice activists, children and others gathered at the community institution the Mead Public Library. A march from Fountain Park preceded the library gathering. Many current and retired public school educators took part.

Participants at the event were excited to build and develop relationships and to strategize about ways to build people’s unity in the Sheboygan area and worldwide. Those present took opportunities to learn about various organizations which had literature tables, heard speakers and generally enjoyed the atmosphere of like minded working class folks wanting to build a better world free of bigotry and hate.

A sign making party to prepare for the January 19 event took place the week prior. 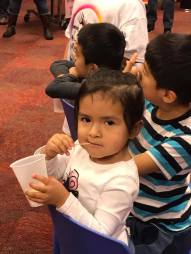 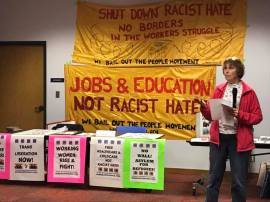 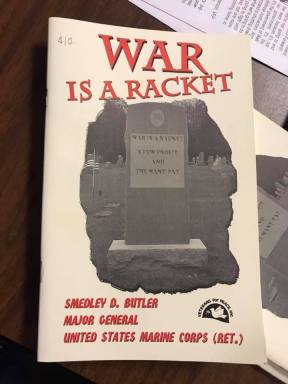