Hundreds of people from around the state stood on the steps of the state Capitol Tuesday, challenging systemic racism with chants led by the Rev. Marilyn Miller: “Old Jim Crow or new Jim Crow, the racist system has got to go!”

Inside, they met with state lawmakers to support some parts of Gov. Tony Evers’ budget and to oppose others, especially expanding Wisconsin’s prison capacity as part of the day of action for WISDOM, a faith-based, social justice group.

“Showing our power and truth to justice, that’s what we’re out here doing,” said Robert Agnew Jr., a community organizer with JustLeadershipUSA. “We know that freedom is on the other side of this fight.”

The activists and residents pushed for racial justice through various sectors. Budget proposal elements they urged support for included increased funding for public transit, public education and health care, as well as Evers’ plan to expand driver’s license eligibility to those living in the country illegally.

They also took a strong stance against mass incarceration, calling for a number of reforms — some of which the governor has previously said he supports. They urged lawmakers to support limiting solitary confinement, boosting funding for treatment alternatives and diversion programs, reforming revocation policies, reviewing parole eligibility for all inmates and shutting down the Milwaukee Secure Detention Facility (MSDF).

They offered many of these measures as alternatives to Evers’ financing request for an additional 288 beds in Wisconsin’s state prisons, outlined in his capital budget proposal, which they don’t support.

Agnew leads the #CLOSEmsdf campaign, along with partners at WISDOM and EXPO, an organizing group composed of formerly incarcerated individuals. Angew placed closing the detention facility and ending “crimeless revocations” at the forefront of his fight.

Eighteen people have died at MSDF since it opened in 2001. Last week, 51-year-old William Leary became the most recent person to die inside the prison. The Milwaukee Journal Sentinel reported the medical examiner’s evaluation mentioned a handwritten note from Leary, which complained about a lack of medical care…. 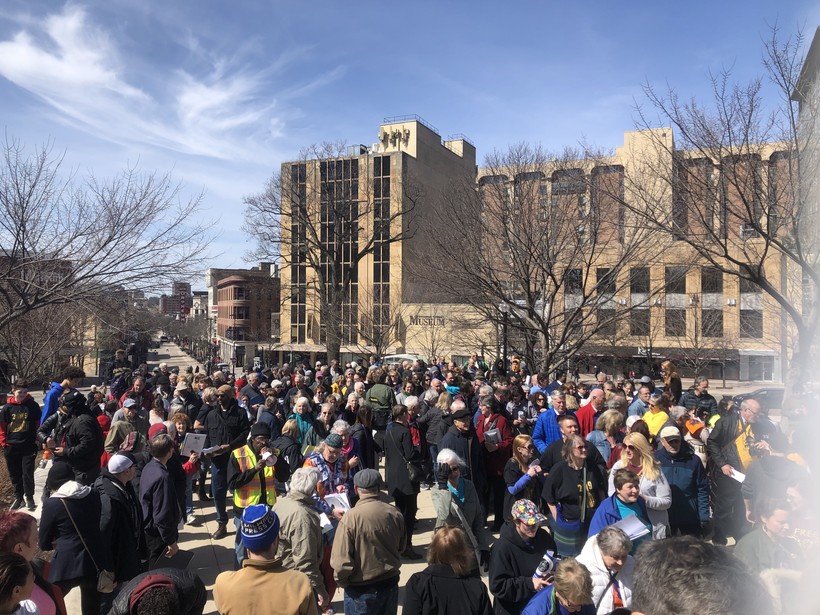 Hundreds of protesters gather on the steps of the state Capitol on Tuesday, March 26, 2019 to challenge systemic racism. Phoebe Petrovic/WPR