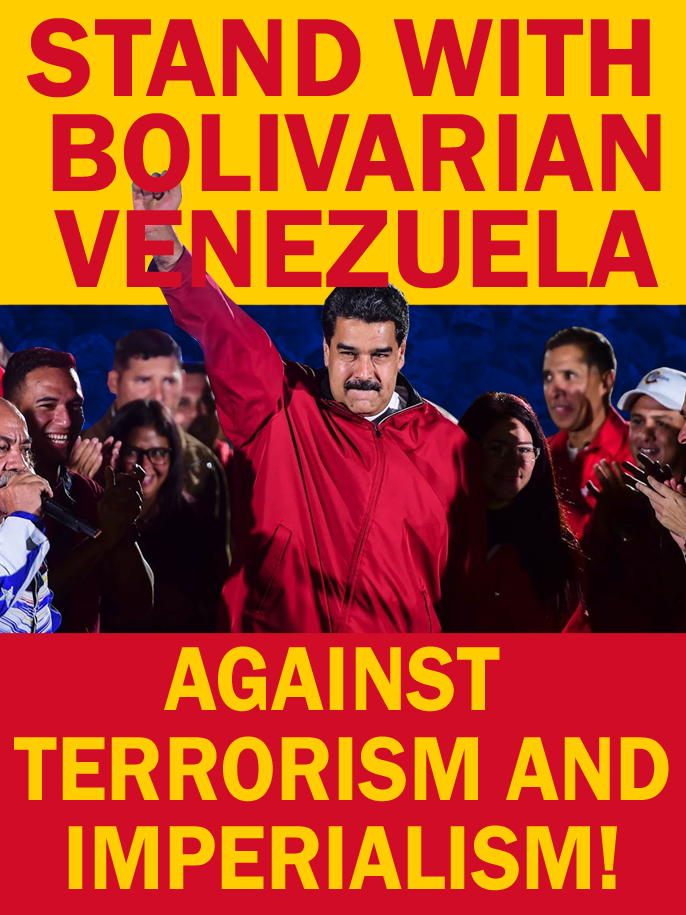 Demand: No US war on Venezuela!

1. Continue to purchase and enjoy the great Stone Creek Coffee products we proudly make! While you’re at any Stone Creek location, let the staff know you support their effort to form a union.

2. Sign and share our petition asking management to recognize our union and not interfere with our right to organize:
https://tinyurl.com/y2w98hsh

3. Print our poster and take a selfie or group photo to share on social media:
https://tinyurl.com/yxwayuv9

4. Share posts on social media in support of our union with the hashtag #StoneCreekUnion

Thank you all for your solidarity!

A diverse crowd of all ages joined together in Sheboygan March 23 for “People’s Offensive March And Rally.” Participants came from throughout Northeastern Wisconsin, Milwaukee, Racine, Chicago and other locations.

Participants began the day at Lake Michigan for a Water Ceremony and to participate in cultural events. From there the all ages crowd went to three different march points and chanting marching to Fountain Park to gather in unity and for a rally.

At the rally with a backdrop of banners, a rainbow of speakers from community, union and student organizations all raised the need to continue building an independent people’s movement that is grounded in anti-racism and internationalist. The history of worker’s struggles in the Sheboygan area was honored including the UAW Local 833 strikes at Kohler, educator actions and more. Women, LGBTQ and immigrant rights activists spoke out and the need for solidarity with People’s Venezuela was raised.

Following the rally, participants marched to Mead Library for a community gathering to share donated food, to develop relationships and to learn about people’s organizations that had literature tables for the occasion.

The March 23 actions were sponsored by Crusaders of Justicia, Sheboygan COMM-Unity and Wisconsin Bail Out The People Movement and supported by numerous organizations in Wisconsin and the Communist Workers League of Chicago which sent a delegation to the march and rally.

We will come together to unite the community in a march and rally. We will lift up the voices of all exploited people to fight for a WISCONSIN WHERE ALL FAMILIES CAN PROSPER.

All marchers will proceed to Fountain Park (N 8th Street Between Erie and Ontario) for a UNITY RALLY!

Then to Mead Library for a COMMUNITY GATHERING, 710 North 8th Street, Sheboygan

NOTE: Plenty of lot and street parking at all locations.

Find that old cookbook or dig into your grandma’s recipe box: celebrate the history of working class struggle with the food that represents whatever you consider to be your family’s heritage and traditions.

If your ancestral inheritance does not include the struggles of the working class you can bring cake.

After we share a meal there will be a short program about the strike, the fire, and of course, singing.

Arboretum Cohousing is handicap accessible and kid friendly. Everyone is welcome!

Standing with ATU Local 998 bus drivers to say NO to $6,000 health insurance deductables!

The Guaidó case has all the characteristics of CIA operations to overthrow governments not amenable to U.S. interests

The Government of Venezuela denounced on Monday the forced and illegal occupation of its diplomatic offices located in the United States (USA) in clear violation of the provisions of the Vienna Convention on Diplomatic Relations.

Last January 23, President Nicolas Maduro announced the complete rupture of diplomatic and political relations with the US government after their decision to recognize the illegal self-proclamation of deputy Juan Guaido. Disregarding the complete cessation of functions of all diplomatic and consular personal in each country, their infrastructure, assets and documents must be respected according to the Vienna Convention, the main authority, to decide what a “legal government” is, would be the United Nation’s position and not the particular position of one country (in this case, the US).

In a statement posted on the Twitter account of Chancellor Jorge Arreaza, the Bolivarian Government asserts that this action has the backing of US authorities and has political interests.

“To tolerate or promote any threat or intimidation against Venezuelan diplomatic agents by citizens residing in the United States constitutes a very serious violation of the international obligations of the US Government,” he says.

They also reiterated that the diplomatic missions should only be used by official diplomatic agents who have been appointed and represent the democratic government of President Nicolás Maduro. President Maduro is the current President of Venezuela according to the United Nations disregarding whom the US regime recognizes.

In this regard, they demand the US authorities to “comply with their legal obligations and take the necessary measures to immediately reverse such de facto forced occupation.”

In case the US Government continues in breach of its international obligations, the communique warned that Venezuela “reserves the corresponding legal and reciprocal decisions and actions” in its territory. This is in reference to the possibility that the Venezuelan government in legitimate retaliation might take control of US facilities in Venezuela.

For his part, the official designated for the USA by the self-proclaimed opposition deputy Juan Guaidó, Carlos Vecchio, reported that there were three occupied diplomatic headquarters, two in Washington (capital) and a consulate in New York….