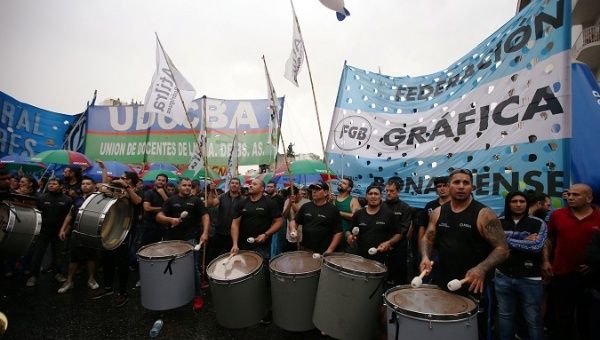 A rally led by various unions is scheduled for International Labor Day on May 1. Politicians from the opposition will also join the rally.

“This strike is a demonstration of repudiation by our society of a government which has produced hunger, misery, unemployment, and indebtedness,” said Hugo Moyano, the head of truckers’ union.

Leaders of different unions called for a “rejection of the government’s economic policy.”

The decision to strike comes less than two weeks after the administration started freezing basic goods prices in order to control increasing inflation.

The government decided not to increase the prices of basic services also like transport, gas, and electricity.

“This situation is very, very bad, we [are seeing] an increase in poverty … the truth is money doesn’t buy anything,” Soledad, a social organizer, said.

A proponent of the free market, Macri, who is seeking re-election in October, came to power in 2015. But his popularity is rapidly decreasing. The main reason is the country’s declining economy.

“It really worries us, money is just not enough. I don’t earn in dollars, and it’s impossible to eat, live and pay taxes,” Elisa, a pensioner in Argentina told Al Jazeera

Reports have shown that poverty has risen to 32 percent from 26 percent in the previous year, and the current inflation rate is 45 percent.