Our union is calling on members of Congress to protect federal employees’ workplace rights and freedom to join a union after the U.S. Court of Appeals issued a decision greenlighting President Trump’s union-busting executive orders.

The U.S. Court of Appeals July 16 ruled that the U.S. District Court for the District of Columbia did not have jurisdiction to rule on the matter of the legal challenge by AFGE and other federal unions to President Trump’s May 2018 union-busting executive orders. The district court had ruled in favor of the unions, striking down the bulk of three anti-worker executive orders affecting all federal employees.

“The U.S. Court of Appeals’ terrible decision is a tremendous blow to federal employees and their voice in the workplace,” said AFGE President J. David Cox Sr. “The decision is mistaken about the jurisdictional question, wrong on the law, and jeopardizes the rights of federal employees across the government. We will fight this decision using every legal tool available to us.”

At its heart, this case is about the administration’s attempts to deprive federal workers of their rights to address and resolve workplace issues such as sexual harassment, racial discrimination, retaliation against whistleblowers, workplace health and safety, and reasonable accommodations for workers with disabilities.

“While we pursue our legal options and next steps, we also call on members of Congress to stand with federal workers and protect our workplace rights,” Cox added. “The union-busting framework laid out in the executive orders and the actions already taken at the bargaining table so far demonstrate clearly that there must be a check on the president’s power to destroy federal employees’ union rights.”

Click here for more information about our campaign against the EOs. 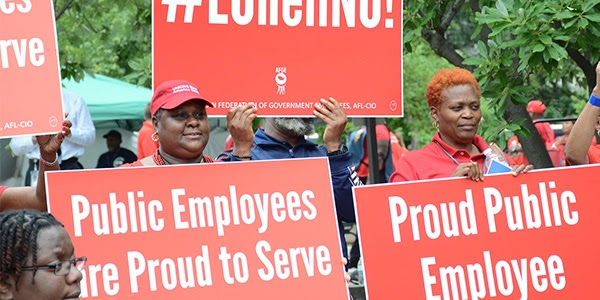