London: The United States government has promised that Julian Assange will get a fair trial on espionage charges, rejecting the accusation of a United Nations expert that the administration “intends to make an example of him” with excessive charges and jail time.

It has challenged the assessment of the expert, the UN’s Special Rapporteur on Torture Nils Melzer, that Assange would “be exposed to a real risk of torture or other cruel, inhuman or degrading treatment or punishment” if he ended up in a US jail.

But Melzer has warned that extradition to the US would severely and dangerously worsen Assange’s already fragile psychological state.

The WikiLeaks founder is in a London jail awaiting a legal fight against extradition to the US, where he has been charged with conspiracy to receive and disclose top secret documents allegedly obtained from army whistleblower Chelsea Manning in 2010…. 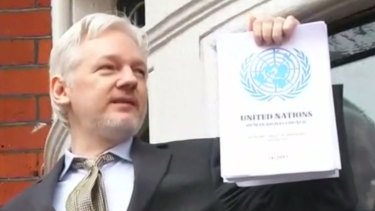 Julian Assange brandishes a 2016 UN report that found he was being detained unlawfully. CREDIT:NINEVMS