During their visit, they personally were greeted and met with President Maduro, who gifted them with a replica of Simon Bolivar’s sword.

Venezuela’s President Nicolas Maduro reiterated Tuesday his gratitude to United States’ activists who were members of the Protection Collective of Venezuela’s embassy in Washington.

“Our gratitude and eternal recognition to the Protection Collective of our diplomatic headquarters in Washington. Their performance reflects high morals for the defense of the dignity and sovereignty of the Venezuelan people,” the president tweeted.

The delegation of the Embassy Protection Collective visited Caracas to be part of the 25th edition of the Sao Paulo Forum, which annually gathers left-wing organizations, parties, and governments. During their visit, they personally were greeted and met with President Maduro, who gifted them with a replica of Simon Bolivar’s sword.

‘It is the replica of the Liberator’s sword, used in the Battle of Carabobo, and I want to give you as a token of appreciation of the most valuable we have, which is the love of freedom, as a symbol of the eternal union between our peoples,” the head of state said during the ceremony.

The activists occupied the Venezuelan embassy in Washinton D.C. for 37 days, defending it against U.S. authorities and the Venezuelan opposition since mid-April. To retaliate, U.S. and opposition forces sought to cut electricity and water services to the building, as well as prevent food from entering by keeping a siege on the premises daily.

The diplomatic premises were finally violently raided by U.S. police on May 16, as unofficial representatives of lawmaker Juan Guaido took over the building.

Ambassador of Venezuela to the United Nations (U.N.), Samuel Moncada, denounced it as a violation of the 1961 Vienna Convention by the U.S. government. The Venezuelan official reminded that according to Art. 22 of the Convention on Diplomatic Relations, “the premises of the mission shall be inviolable.”

Even during a break in diplomatic relations and supported by Art. 45, the receiving nation, in this case, the U.S., must continue respecting foreign properties. As is the case of the Venezuelan government who has respected the U.S. Embassy in Caracas, and under international law allowed the Swiss government — appointed by the U.S. — to take care of the premises. https://bit.ly/2YjyYe1 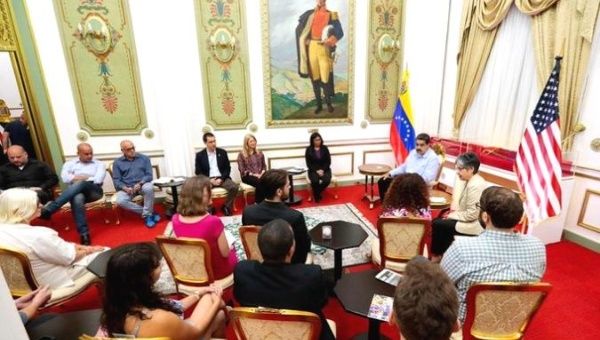 The Embassy Protection Collective visited Caracas to be part of the 25th edition of the Sao Paulo Forum. | Photo: Nicolas Maduro Twitter