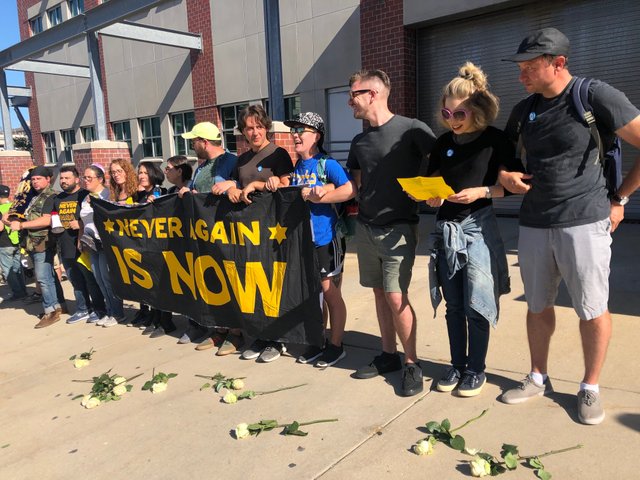 More than 100 protesters shut down the Milwaukee Immigration and Customs Enforcement (ICE) building Thursday morning August 1. Protesters marched around the office in efforts to stop ICE agents from leaving to carry out raids and detentions in the area.

Twenty-two Wisconsin Jewish leaders stood in front of the entrances and exits of the building, effectively shutting the building down for a time. This is being done as part of the “Never Again Is Now” movement across the country. Just last Tuesday, protesters in Minneapolis effectively blocked exits at an ICE Detention Center court.

Over 30 other actions across the United States will also, or already have, taken place.

“Our whole lives we were taught, ‘You shall not stand idly by,’” said Rabbi Laurie Zimmerman of Congregation Shaarei Shamayim in Madison, one of the organizers of Thursday’s action. “We refuse to remain silent when migrants face inhumane treatment. We refuse to remain silent when they are forced into filthy, overcrowded detention centers and deprived of basic rights.

The office, located at 310 East Knapp Street in Downtown Milwaukee, is also home to the U.S. Citizenship and Immigration Services office. Protesters marched from Cathedral Square Park to the building. They then held signs, sang, and sat or stood – blocking the entrances for hours.

Sheila Plotkin, a Jewish woman who came from Madison for the rally, said this is an issue that resonates with her.

Potkin has family members who were lost in the Holocaust.

“We have to learn from our history. We cannot repeat it,” she added.

Ari Bloomekatz helped organize the protest. He said what excited him about the protest is that it was organized by a large group of individuals across the state.

“It’s very inter-generational,” he said. “This has, in many ways, really been a convening of the Jewish community across the state to make this happen.”

Voces De La Frontera and other community action groups were also present at the event.

The Never Again Is Now Wisconsin group further explained Thursday’s action with the following statement in a press release.

“Central to Jewish life is the concept of Tikkun olam, the responsibility to heal the world and pursue social justice. Jews are taught from an early age that to remain silent in the face of injustice is morally unacceptable. We know from bitter experience where the separation of families, the rounding up of people, and the creation of detention/concentration camps leads. We refuse to wait and see what happens next. We are putting our bodies on the line and risking arrest in memory of our loved ones whose families were broken up, whose lives were stolen, and because when we say never again, we mean never again for anyone.We take action now to stop the breaking up of families and the deportation of immigrants, refugees and asylum seekers and to demand that ICE be shut down.”