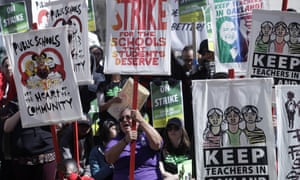 The new school year has just begun and teachers across the US are preparing to continue the wave of strikes that made 2018 one of the biggest years for workers’ protest in a generation.

From Nevada to Illinois teachers are preparing to escalate a campaign that generated major victories last year, but that many say have been reneged on by local authorities and have still left teachers facing insurmountable problems.

Oklahoma was one of the states that led last year’s strikes and where teachers made significant gains. But a year on teachers still feel stretched to breaking point as they struggle with low pay, poor working conditions, and hostile Republican legislators….