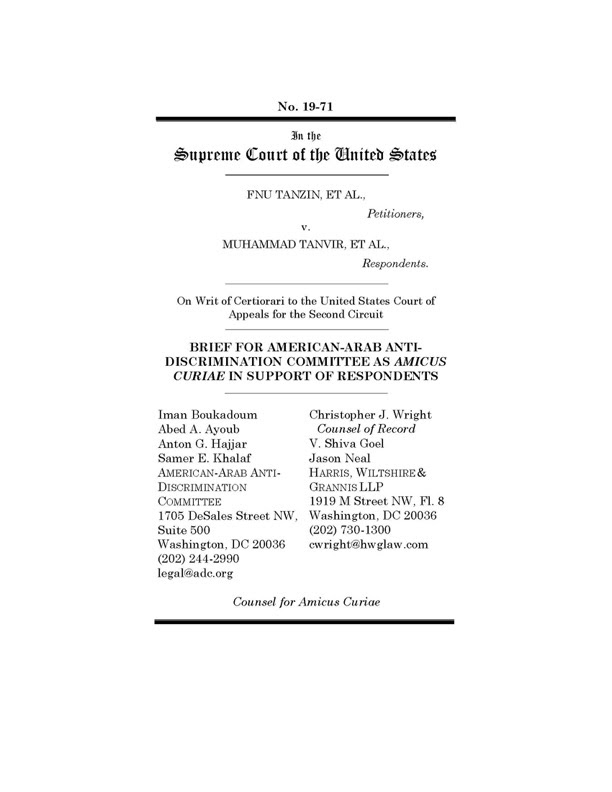 Washington, D.C. | adc.org | February 13, 2020 – The American-Arab Anti-Discrimination Committee (ADC) filed an amicus brief, in coordination with Harris, Wiltshire & Grannis LLP, with the United States Supreme Court supporting Respondents in Tanzin v. Tanvir. The case involves three Muslim men who were placed or kept on the No-Fly List in retaliation for refusing to spy on their communities. The men in the case were approached by FBI agents and asked to spy generally on their communities, including to visit online Islamic forums and “act extremist.” They were told that spying on their communities could keep them from being placed on the No-Fly List or get them removed. Each of the men refused because, among other things, spying on their communities, going into mosques under false pretenses went against their religious beliefs.

The Court will consider whether the Religious Freedom Restoration Act (RFRA) allows the men to sue agents for damages for the harm the men suffered as a result of being on the list. The Trump administration has asked the Supreme Court to rule that the federal agents are immune from suit. ADC and the attorneys for the men, say the only way to deter future civil rights violations is to impose penalties for past violations.

Federal law enforcement continues to burden the religious rights of far too many Arab Muslims and others, with impunity. Congress passed RFRA with bipartisan and overwhelming support to safeguard the free exercise of religion. ADC argued that RFRA clearly includes a damages remedy to deter behavior that (a) violates clearly established religious rights and (b) is so shocking that it falls into the very small percentage of cases in which the federal government will not come to the defense of its employee.

ADC Senior Staff Attorney Iman Boukadoum states, “Such behavior ought to be deterred. And, contrary to the government’s claim, no ‘well-intentioned’ federal employee might unwittingly engage in it. Injunctive relief cannot fully compensate aggrieved believers nor adequately deter future violations of their religious rights. Damages are essential to make them whole and to turn the page on an era where faith so often meets suspicion.”

Read the brief filed here. The Supreme Court is set to hear the case on March 24, 2020. Please contact legal@adc.org with questions.