In his fiscal 2021 budget proposal released Feb. 10., President Trump continued to wage war against his own workforce with plans to eliminate their jobs, cut their retirement and paid leave, and change their pay system to lower their pay.

Federal employees protect the environment, public health, public education, national security, Social Security, and our food supplies. They take care of veterans, our troops, national parks, and many others.

But in his efforts to undermine key government functions and privatize, handing over control to private, for-profit corporations, Trump has used forced relocations, proposed cuts to retirement and pay, and union-busting tactics to silence civil servants on the job – all in an effort to get federal employees to retire or quit. His budget proposal for 2021 is no different.

Here’s what on the administration’s hit list in the 2021 budget proposal:

The administration is proposing a legislative change to allow agencies to quickly implement anti-worker management edicts regardless of what the current agreement between the agency and the union says.

It will also issue regulations to implement the anti-worker executive orders this year.

To make the system even more unfair and anti-worker, the administration prohibits employees from appealing an unfair step increase determination to the Merits Systems Protection Board.

Employees have 13 sick days and between 13 and 26 vacation days depending on their length of service. The administration wants to reduce these paid leave days and lump the two categories together to create just one pool of paid leave. To cope with health and family issues, the administration is telling employees to buy short-term disability insurance, short-term childcare and personal accident insurance.

The administration is aiming its axe squarely on federal workers’ ability to retire with dignity after decades of service. Here’s what they want to do:

The administration is looking to eliminate federal jobs. For example, people who call government numbers would be talking to chat bots instead of real human beings.

This year, the administration is targeting federal employees at the Defense Department. In addition to a recent memo authorizing the Defense Department to end unionization, the administration is seeking to reduce staffing at DoD in 2021, hoping to save $5 billion. DoD said it had saved $6 billion through job cuts in 2019. The end of unionization at DoD would undoubtedly lead to high turnover and privatization, endangering the lives of our troops and our national security.

The administration continues to undermine the mission of some very important agencies responsible for public health, education, and housing by proposing to cut their funding:

Even though the Department of Veterans Affairs appears to get a budget boost, the money is unlikely to be used to hire more people to take care of veterans. There are 50,000 vacancies at the VA, but the agency head has said on several occasions that filling these vacancies is not the agency’s priority.

The administration reintroduced its plan to eliminate the Office of Personnel Management, the central personnel office that protects the merit systems in the government, and transfer its functions to the highly political Executive Office of the President and the General Services Administration, which mainly handles buildings and fleets of vehicles.

If you are outraged by these bad ideas, Join AFGE and ask your coworkers to join AFGE today! We are not just a union – we are a movement. 2019 showed that when we stand together, we win! So join our movement today and help make life better for federal and D.C. government workers. 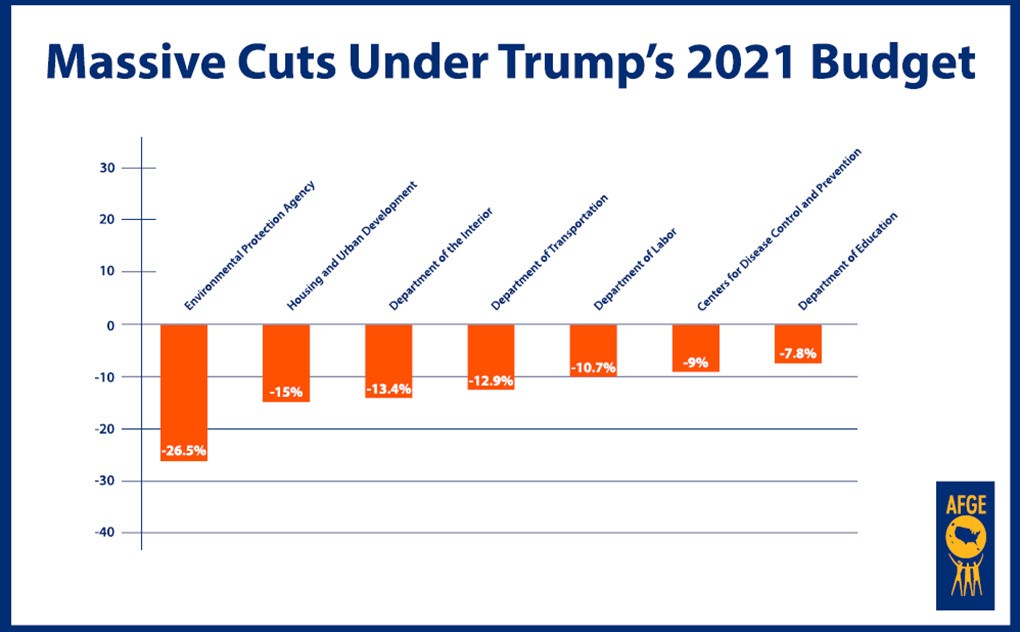