“As Oberlin alumni we are outraged at the College’s plan to outsource its custodial and dining services to outside contractors. As a result of this decision, 108 UAW Local 2192 union workers–members of the Oberlin community–stand to lose their jobs. Those who do find jobs with outside contractors will face pay cuts, benefits losses, and degraded working conditions. Unions are critical to upholding living wage jobs and securing rights in the workplace. Replacing union workers with outside contractors in order to cut costs is union busting, plain and simple.

The College has said that these moves are “difficult choices to ensure the long-term health of the institution.” The College must not make “difficult choices” on the backs of some of Oberlin’s most vulnerable workers and their families. This is a gross irony in a county in which only 24% of residents over the age of 25 have a bachelor’s degree and the income per capita is almost half of the annual tuition at Oberlin College. By devaluing the labor of our dining and custodial staff and undercutting their bargaining power, any statements Oberlin College could make about our legacy of social justice are hypocritical. Oberlin College must maintain its commitment to the Oberlin community and to those community members who provide vital services that support student learning and the College’s mission.

We stand with UAW Local 2192 and will withhold our financial support from the College until this decision is reconsidered.”

When Gown Crushes Town: The Corporatization of Oberlin College

Oberlin College, with a long history of promoting justice and fairness in the darkest of times, is in real danger of losing its moral compass. Instead of ameliorating these societal injustices, the administration and trustees of Oberlin College are actively and deliberately exacerbating poverty and illness in northern Ohio by replacing 108 unionized dining hall and maintenance workers with lower-paid non-union sub-contractors. The cost savings, claimed to total $2 million per year, will primarily come from the fact that Oberlin’s unionized workers currently have decent health care benefits while replacement non-union sub-contractors will have none.

As Buffy Lukachko, the head trucker in the Transportation Department at Oberlin College said, “My wages, other’s wages, might be roughly $28,000 a year, but the expense the College has to pay out for health care is also around $28,000 a year….The way around that is outside vendors because they don’t need to worry about health care anymore.”

Nearly all of these 108 people will soon face excruciating challenges as they are severed from multi-generational service to the College. As Erik Villar, the union representative said, “A majority of our members…have had generations of family members work here….To be told out of the blue on a random Tuesday… that these changes would be implemented in less than four months is a slap in our face to everyone here….” 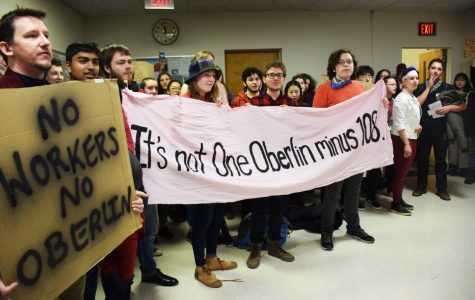