Workers’ Republic, 24 July 1915.
Transcribed by The James Connolly Society in 1997.
Marked up by Einde O’Callaghan for the Marxists’ Internet Archive.

A complete summary of the lessons to be derived from the military events we have narrated in these chapters during the past few months would involve the writing of a very large volume. Indeed it might truly be urged that the lessons are capable of such infinite expansion that no complete summary is possible.

In the military sense of the term what after all is a street? A street is a defile in a city. A defile is a narrow pass through which troops can only move by narrowing their front, and therefore making themselves a good target for the enemy. A defile is also a difficult place for soldiers to manoeuvre in, especially if the flanks of the defile are held by the enemy.

To traverse a mountain pass with any degree of safety the sides of the mountain must be cleared by flanking parties ahead of the main body; to pass over a bridge the banks of the river on each side must be raked with gun or rifle fire whilst the bridge is being rushed; to take a street properly barricaded and held on both sides by forces in the houses, these houses must be broken into and taken by hand to hand fighting. A street barricade placed in position where artillery cannot operate from a distance is impregnable to frontal attack. To bring artillery within a couple of hundred yards – the length of the average street – would mean the loss of the artillery if confronted by even imperfectly drilled troops armed with rifles.

The Moscow revolution, where only 80 rifles were in the possession of the insurgents, would have ended in the annihilation of the artillery had the number of insurgent rifles been 800.

The insurrection of Paris in June, 1848, reveals how districts of towns, or villages, should be held. The streets were barricaded at tactical points not on the main streets but commanding them. The houses were broken through so that passages were made inside the houses along the whole length of the streets. The party walls were loopholed, as were also the front walls, the windows were blocked by sandbags, boxes filled with stones and dirt, bricks, chests, and other pieces of furniture with all sorts of odds and ends piled up against them.

Behind such defences the insurgents poured fire upon the troops through loopholes left for the purpose.

In the attack upon Paris by the allies fighting against Napoleon a village held in this manner repulsed several assaults of the Prussian allies of England. When these Prussians were relieved by the English these latter did not dare attempt a frontal attack, but instead broke into an end house on one side of the village street, and commenced to take the houses one by one. Thus all the fighting was inside the houses, and muskets played but a small part. On one side of the street they captured all the houses, on the other they failed, and when a truce was declared the English were in possession of one side of the village, and their French enemies of the other.

The truce led to a peace. When peace was finally proclaimed the two sides of the village street were still held by opposing forces.

The defence of a building in a city, town or village is governed by the same rules. Such a building left unconquered is a serious danger even if its supports are all defeated. If it had been flanked by barricades, and these barricades were destroyed, no troops could afford to push on and leave the building in the hands of the enemy. If they did so they would be running the danger of perhaps meeting a check further on, which check would be disastrous if they had left a hostile building manned by an unconquered force in their rear. Therefore, the fortifying of a strong building, as a pivot upon which the defence of a town or village should hinge, forms a principal object of the preparations of any defending force, whether regular army or insurrectionary.

In the Franco-German War of 1870 the chateau, or castle, of Geissberg formed such a position in the French lines on 4 August. The Germans drove in all the supports of the French party occupying this country house, and stormed the outer courts, but were driven back by the fire from the windows and loopholed walls. Four batteries of artillery were brought up to within 900 yards of the house and battered away at its walls, and battalion after battalion was hurled against it. The advance of the whole German army was delayed until this one house was taken. To take it caused a loss of 23 officers and 329 men, yet it had only a garrison of 200.

In the same campaign the village of Bazeilles offered a similar lesson in the tactical strength of a well-defended line of houses. The German Army drove the French off the field and entered the village without a struggle. But it took a whole army corps seven hours to fight its way through to the other end of the village.

A mountainous country has always been held to be difficult for military operations owing to its passes or glens. A city is a huge mass of passes or glens formed by streets and lanes. Every difficulty that exists for the operation of regular troops in mountains is multiplied a hundredfold in a city. And the difficulty of the commissariat which is likely to be insuperable to an irregular or popular force taking to the mountains, is solved for them by the sympathies of the populace when they take to the streets.

The general principle to be deducted from a study of the examples we have been dealing with, is that the defence is of almost overwhelming importance in such warfare as a popular force like the Citizen Army might be called upon to participate in. Not a mere passive defence of a position valueless in itself, but the active defence of a position whose location threatens the supremacy or existence of the enemy. The genius of the commander must find such a position, the skill of his subordinates must prepare and fortify it, the courage of all must defend it. Out of this combination of genius, skill and courage alone can grow the flower of military success.

The Citizen Army and the Irish Volunteers are open for all those who wish to qualify for the exercise of these qualities. 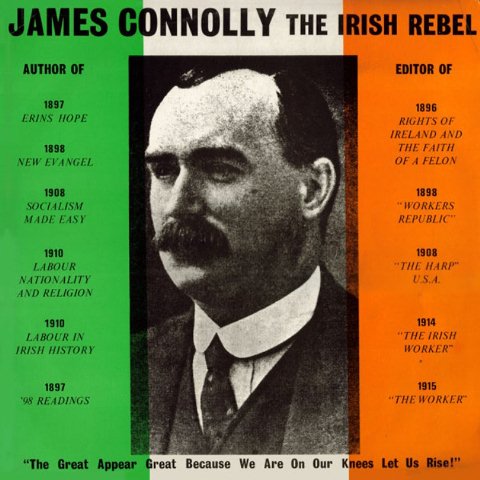