The masks, reading “Stop killing Black people,” were meant to quell the spread of the coronavirus, which has disproportionately affected Black Americans. 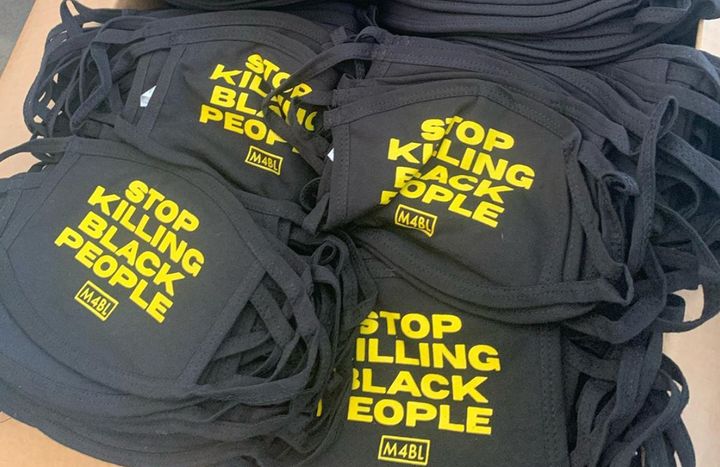 THEMOVEMENTINK / INSTAGRAM – Cloth masks that read “Stop killing Black people” and were intended to protect demonstrators from COVID-19 were seized by law enforcement.

WASHINGTON ― Law enforcement agents have seized hundreds of cloth masks that read “Stop killing Black people” and “Defund police” that a Black Lives Matter-affiliated organization sent to cities around the country to protect demonstrators against the spread of COVID-19, a disease that has had a disparate impact on Black communities.

The Movement for Black Lives (M4BL) spent tens of thousands of dollars on the masks they had planned to send all over the country. The first four boxes, each containing 500 masks, were mailed from Oakland, California, and were destined for Washington, St. Louis, New York City and Minneapolis, where on May 25 a white police officer killed George Floyd, a 46-year-old handcuffed Black man, setting off a wave of protests across the country.

But the items never left the state. The U.S. Postal Service tracking numbers for the packages indicate they were “Seized by Law Enforcement” and urge the mailer to “contact the U.S. Postal Inspection Service for further information.”

The U.S. Postal Inspection Service did not immediately respond to HuffPost’s request for comment.

Rene Quinonez of Movement Ink in Oakland, who stayed up with his family producing the masks over the past few days and took them to the post office, told HuffPost that the employees at the location from which he shipped the boxes know him well.

“I have shipped a lot of stuff before,” he said. “It’s an inside joke that I’m always shipping a ton of stuff, usually next-day or two-day and paying some ridiculous fees.”

“These guys know that I ship apparel,” Quinonez said. “There was nothing out of the ordinary.”

Now he’s wondering if the government is watching him or watching the Black Lives Matter movement. “I just don’t understand it. It’s just really blowing my mind,” he said.

“We’re tired, but we’re going to try to rally some support and figure out how to replace these masks and how to support the movement,” he said. “This isn’t a weapon. It’s more about safety. We’re trying to figure out how to keep our community safe.”

It’s not entirely clear what law enforcement entity seized the masks or why. But the Justice Department, led by Attorney General William Barr, has taken an aggressive posture against demonstrations and on Thursday expressed concern about “extremist agitators” who are “hijacking the protests to pursue their own separate and violent agenda.”

The Movement for Black Lives is a group of more than 150 leaders and organizations that are “unified in a radical vision for Black liberation and working for equity, justice and healing.” It was started in December 2014, a few months after the unrest in Ferguson, Missouri, following the police killing of Michael Brown.

“Police have rioted coast to coast, beating and gassing protesters who have called for an end to police violence, with the explicit approval of President Trump,” Chelsea Fuller, a spokesperson for the Movement for Black Lives, said in a statement to HuffPost.

“Now, it appears they want to ensure that people who protest are susceptible to the same deadly pandemic that they have failed miserably at stopping,” Fuller added. “The continued surveillance and disruption of social movements under this administration is as chilling as it is dangerous. It should be roundly condemned.”

The head of the federal Centers for Disease Control and Prevention said Thursday that protesters should “highly consider” getting tested for the coronavirus and worried that protests could “unfortunately” turn into “a seeding event.”