Demands for the return of four men have gone international, as their whereabouts are still unknown, one week after they were forcibly disappeared.

According to information gathered by the Inter-American Commission on Human Rights (IACHR), the unidentified armed kidnappers wore bulletproof vests with the initials of the Police Investigations Directorate.

Caravans and protests were held throughout the week by the Black Fraternal Organization of Honduras (OFRANEH) and the community, demanding the safe return of the four men amid a constant violent siege against Garifuna people: “The wave of violence against Garifuna people is part of an expulsion strategy. You took them alive, we want them back alive.”

OFRANEH has presented a habeas corpus, demanding whereabouts of the four men who they say were disappeared by state security forces in the context of an 11-year neoliberal human rights crisis which was initiated by the 2009 U.S. and Canada-backed coup against leftist President Manuel Zelaya.

Since the 1970s, OFRANEH has led the struggle for defense of Garifuna territories and human rights, particularly against pro-global business violence and repression which has been the cause of the killings of dozens of Garifuna community defenders and the wounding, criminalizing and political imprisonment of many more.

The current administration headed by Juan Orlando Hernandez has been closely linked to global companies and investors involved in efforts to remove and dispossess the Garifuna people from ancestral lands, to make way for tourism and African palm industries.

The IACHR has condemned the forced disappearance and says it is aware of investigations by Honduran police and the arrest of a person allegedly responsible—though OFRANEH has warned that the arrest may be a front.

The Commission has urged the state to locate the disappeared and guarantee their lives while bearing in mind the activities which the Triunfo leaders carried out in demanding compliance with a recent ruling of the Inter-American Court of Human Rights which favored the rights of the community over their territory.

Honduras Solidarity Network and the Alliance for Global Justice have been at the forefront of international solidarity, both calling for people in the U.S. and Canada to contact Congressional representatives and Members of Parliament on the forced disappearances, particularly given the complicit role of the two governments in supporting the Honduran government-business sector alliance.

For people in the U.S. Contact your officials and ask them to call the State Department and U.S. Embassy in Tegucigalpa, #Honduras, about the recent abduction and forced disappearance of four members of the #Garifuna community of Triunfo de la Cruz ** http://Bit.ly/snidercenteno2 ** 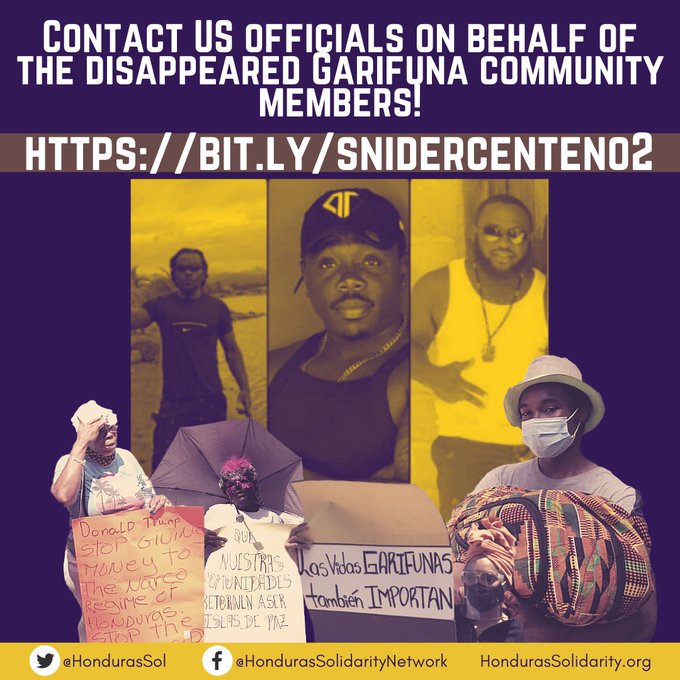