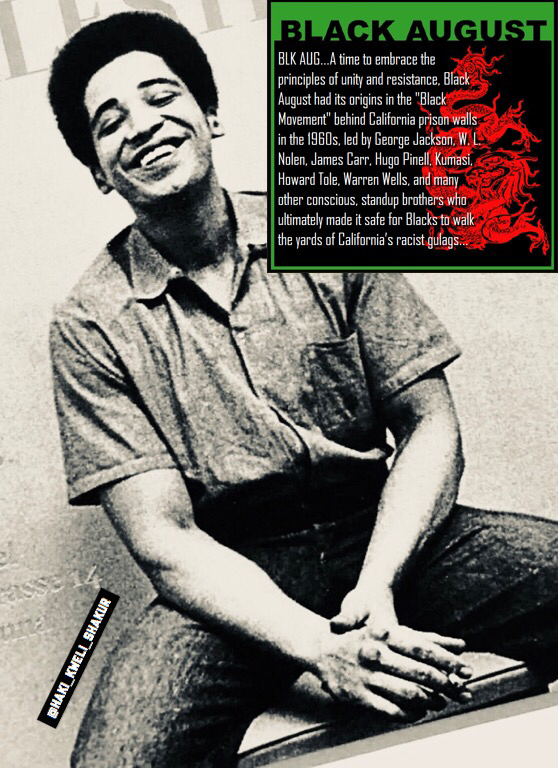 Ruchell Magee is the sole survivor of that armed liberation attempt. He is the former co-defendant of Angela Davis and has been locked down for 38 years [now 45 years], most of it in solitary confinement. George Jackson was assassinated by prison guards during a Black prison rebellion at San Quentin on Aug. 21, 1971. Three prison guards were also killed during that rebellion and prison officials charged six Black and Latino prisoners with the death of those guards. These six brothers became known as the San Quentin Six.

Khatari Gaulden was a prominent leader of the Black Guerilla Family (BGF) after Comrade George was assassinated. Khatari was a leading force in the formation of Black August, particularly its historical and ideological foundations. Khatari, like many of the unnamed freedom fighters of the BGF and the revolutionary prison movement of the 1970s, was murdered at San Quentin Prison in 1978 to eliminate his leadership and destroy the resistance movement.

The brothers who participated in the collective founding of Black August wore black armbands on their left arm and studied revolutionary works, focusing on the works of George Jackson. The brothers did not listen to the radio or watch television in August. Additionally, they didn’t eat or drink anything from sun-up to sundown; and loud and boastful behavior was not allowed.

The brothers did not support the prison’s canteen. The use of drugs and alcoholic beverages was prohibited and the brothers held daily exercises, because during Black August, emphasis is placed on sacrifice, fortitude and discipline. Black August is a time to embrace the principles of unity, self-sacrifice, political education, physical training and resistance.