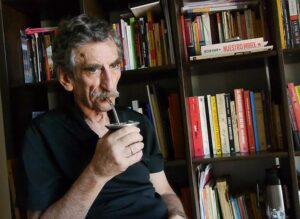 Talking to Jorge Zabalza serves to renew the idea that all those who are fighting in different parts of the Third World are not wrong, but are part of an ideological reserve that does not conform to the brutal onslaught of capitalism. Zabalza was, is and will continue to be a revolutionary. He speaks as he thinks and lives in accordance with his revolutionary ideas. From Uruguay, where the humblest people fight it as best they can, Zabalza continues to call for revolt, using Chile or the streets of the United States as an example that there is still much to be done.

We began the interview by making a solidarity statement:

What I want to make clear is that the missing militant youthFacundo Castro has to appear alive, it cannot be that all the obstacles that have been put in the way of the fight for Truth and Justice. Argentina is the most advanced of all the Plan Condor countries, but they keep disappearing and that is what they call democracy. The police keep disappearing people. The issue of Facundo Castro is much more profound, it shows, in democracy, that there will continue to be state terrorism. There are no systematic disappearances like those carried out by civic-military dictatorships, but there are disappearances. That is a threat that stands up to all social fighters. In the southern cone it did not become systematic. In Colombia it is systematic, in Mexico it is systematic

In Argentina, in this quarantine there were numerous people killed by the police. That is what this confinement was also for, and there is no possibility of going out on the streets to protest against this kind of thing. There are comrades in the most humble neighborhoods who are doing this, and it is healthy that these kinds of atrocities are denounced.

I think that in reality the Coronavirus came as a good thing for the system, stopped all kinds of mobilizations in Argentina and the world. All that popular movement, was stopped. Besides, with a valid excuse: “it is for the health”, we worry about the health, with that excuse also to the service of stopping the economy. The big companies, the big owners of capital in the world who have become rich, are going to start imposing a deep neoliberal policy. The pandemic is misery for those who were already poor and wealth for those who were already rich. In addition, they are preparing us psychologically, all the people, they are introducing the ideology of political control through modern means. State-of-the-art technology is designed to control. On the other hand, consent, because the coronavirus justifies everything.

RELATED CONTENT: A Virus Has Brought the World’s Most Powerful Country to Its Knees

Are you surprised that the taming or appease theory has been so well accepted. Except for the ruptures that are occurring in Chile or on the streets of the United States, that people are putting up with being thrown out of work, put up with having their salaries cut, with disappearing young people and all that we are seeing in these last few months?

We have to look at Chile; they are a kind of laboratory. On the one hand, the popular mobilizations, and on the other, the forms of those who make control, that in Chile the whole political spectrum has collaboration. There, elections end up institutionalizing a hegemonic system. On the one hand it is ideological but it is also very concrete, stick and grill. The people are advancing. Those of us who maintain the struggle, those of us who have a revolutionary idea, do not depend on what one says, nor on political fatigue. The children jump the turnstiles of the subway and everything jumps. One day a comrade is suffocated and killed in the U.S. because he is Black and there is a revolt. There is a boiler that is adding pressure and any justification can provoke it, and this has nothing to do with the ideological teachings of the world. I found out through Resumen Latinoamericano, about the black militias that have emerged in the United States.

This is a phenomenon of the streets crowded with young Afro, Latino and also many white people, but also armed militias in the style of the “Black Panthers” of the 70s.

Weapons which until now were free to buy in supermarkets, which until now were the basis of supremacist groups, are now used for the self-defense by the African-American people. The truth is that this need for popular self-defense arose in Chile too, it hasn’t taken the form it did in the United States, but it’s pending. One thing that no one has been able to avoid is this virus, which is a product of capitalist forms of production. So this that is a consequence of the new capitalist forms of production, today is ending up being a factory of capitalist gravediggers. Because they produce misery, look at the growing number of unemployed in the United States.