On Tuesday, we did something incredible. Thousands of people took action at hundreds of events across the country.

We raised public awareness, got scores of local news stories and built more pressure on our senators to pass legislation to stop the mail slow down and provide $25 billion emergency funding for the Postal Service.

Tuesday’s action was made possible by thousands of people coming together to support one of our most treasured institutions – the public Postal Service. In unity is strength!

In the spirit of lifting up that work, we asked our event organizers to tell us about their experiences. We had too many replies to include all, but here are a few of their responses:

“… about 35 people rallied in front of the downtown Cary post office (Academy St. Substation) in North Carolina. The group included APWU members, retirees, and community members of all ages. The organizer spoke about the importance of USPS to her mail-order book business, and also to her elderly parents who live in a rural area of Western North Carolina. They get their prescriptions by mail. A private post office would not serve their route well at all.”

“An open mic captured the stories of community residents, including immigrant workers and senior citizens who rely on the Post Office to receive medications and benefits, to pay bills and to communicate with their families all over the world. Several spoke about family members who work at the post office, which provides stable employment and support for their families.”

“More than 50 people participated in our socially-distanced, masked vigil, many wearing “Save Our Postal Service! U.S. Mail Not for Sale!” masks, in front of our downtown Kalamazoo, MI post office. Attendees included current postal workers, postal retirees, officers from postal and other unions, local politicians, and many concerned community members, including people visiting the post office yesterday who joined us!”

“[We held an] event with speakers and hula hoop hurrahs at the post office in High Falls, NY. The event was organized by Maria Reidelbach and Risa Mickenberg with Hoopers for Humanity.

Speakers included a local high school history teacher, a child who stays in touch with her uncle by mail, a woman whose postal worker mailed her masks when forwarding her mail to Florida, a woman whose goddaughter was unable to speak for years due to trauma and formed her relationships with people entirely through letters until she was able to speak.”

“It was an awesome day yesterday! Even though air quality was poor because of smoke from the fires here in California, we were a mighty group of 10! We had two retired postal workers join us from 20 and 30 miles away.

People honked, yelled and waved to show their support. Some people didn’t know the post office was in jeopardy and we were able to make them aware of what’s happening and what is at stake. It was a beautiful day of community, symbolic of what the post office has been doing for centuries: bringing people together!”

“I called a contact and asked if they could come out for an hour. Once I had someone with me, I hosted the event. Then people started signing up. It was that simple. I printed up some leaflets and we were ready to go.”

We are truly inspired. When ordinary people organize together, it creates something extraordinary!

We’ve put together some of the most inspiring social media posts with pictures and videos from the day of action. Click here to see more. 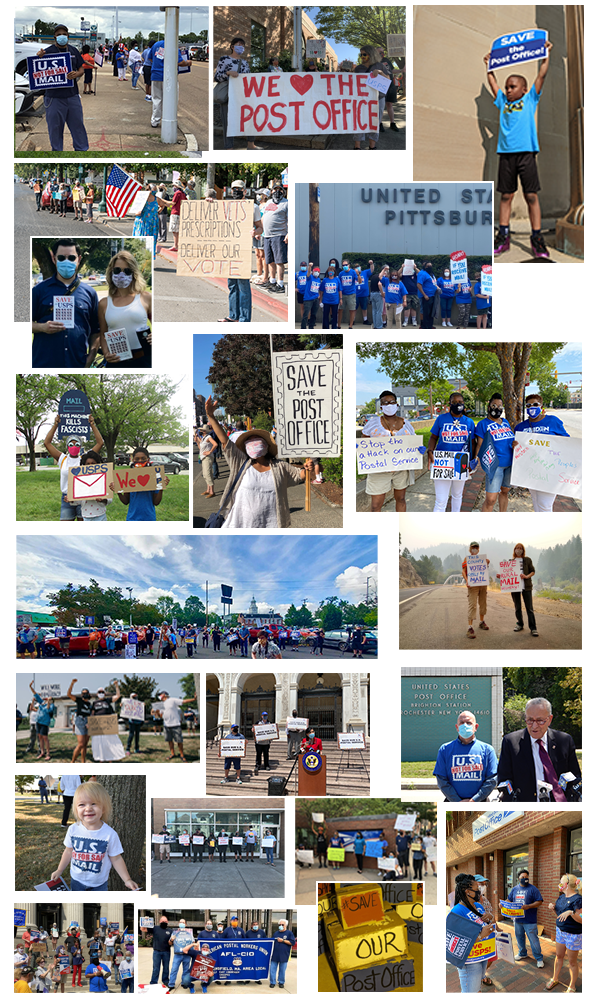