“Now is the time to make justice a reality for all of God’s children. It would be fatal for the 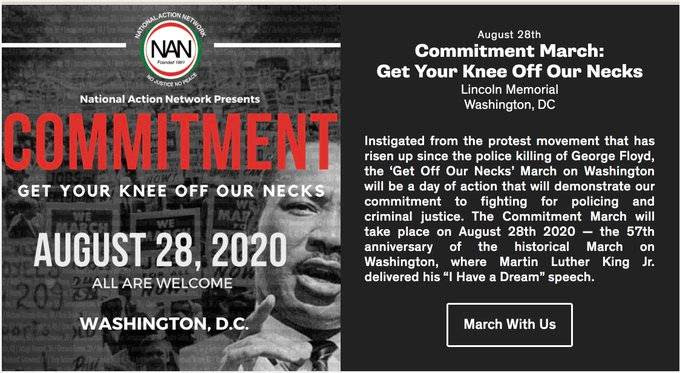 nation to overlook urgency of the moment. This sweltering summer of the Negro’s legitimate discontent will not pass until there is an invigorating autumn of freedom and equality. 1963 is not an end, but a beginning. Those who hope that the Negro needed to blow off steam and will now be content will have a rude awakening if the nation returns to business as usual.”
So said Dr. Martin Luther King, Jr., in his famous “I Have A Dream” speech at the 1963 March on Washington for Jobs and Freedom. With jobs and freedom still just a dream for so many Americans, thousands will march again today, 57 years later, to carry on that struggle. The labor contingent is meeting at the United Unions building starting at 7:15a (see below); at 8:45 they’ll march over to the Lincoln Memorial. Unions participating include AFGE, AFSCME, AFT and IUPAT.

March/Rally: Commitment: Get Your Knee Off Our Necks: Fri, August 28, 7:15am – 3:15pm
Labor contingent gathers at United Unions building, 1750 New York Avenue NW, WDC; march heads out at 8:45a.
Hosted by National Action Network and NAACP.