Several hundred labor and community activists poured into Racine, Wisconsin on December 17 to show support for UAW Local 180 strikers. These workers, along with sister Local 807 in Iowa, have been on strike since May 2, 2022 against Case New Holland corporation, maker of agricultural machinery and construction equipment.

Delegations of supporters started arriving at the UAW Local 180 hall in the morning. They came from all across Wisconsin, from Illinois, Iowa, Indiana and as far away as Detroit. A steady stream of boxes of food, water and holiday presents were hauled into the union hall giving concrete expression to the term “solidarity.” One UAW local from Kokomo, Indiana also brought a monetary donation of over $6,000 to aid the strikers. The community organization Building Unity, brought its RV called the Unity Mobile and organized delegations from Madison, Janesville and other locations with the assistance of the South Central Federation of Labor.

Many local unions were represented, and not just from other auto workers. As the crowd gathered for a 2 PM rally in the bitter cold banners and solidarity signs from many other sectors of organized labor such as the ATU Local 998, AFSCME, the National Writers Union, the Machinists, the NEA, the Teamsters and Steelworkers were raised. Especially notable were the many educators in attendance including the Milwaukee Teachers’ Education Association. Other educators from Kenosha, Racine, Madison and other locations participated. Union retirees were also critical to the success of Solidarity Day.

The broad participation of community organizations that responded to this call to action was especially notable. In addition to many labor speakers were representatives of groups championing immigrant rights and youth. Voces de la Frontera and We Rise Fighting! Labor Podcast played an important role showing that there should be no borders in workers’ struggles – a lesson not always understood in the U.S. labor movement. Voces is in contact with many farm workers across the state of Wisconsin to defend their labor rights and many of these workers use equipment made at Case Holland by UAW members.

Students from University of Wisconsin, Madison caravanned in for the rally. Youth Empowered in the Struggle (YES), the youth arm of Voces de la Frontera were especially eloquent.

Speakers included the President of UAW 180, Yasin Mahdi. A representative of the Family Farm Defenders whose members use equipment made at Case Holland spoke. Others speakers included leaders of the Coalition of Black Trade Unionists (CBTU), the Wisconsin Federation of Nurses and Health Care Professionals-AFT, the Madison Teachers Union, UFCW, the Wisconsin AFL-CIO, the Milwaukee Area Labor Council, the Racine County Labor Council, Building Unity, the Postal Workers Union and Wisconsin Bail Out The People Movement. The Railroad Workers United officially endorsed Solidarity Day and had a representative on site.

The Wisconsin State AFL-CIO helped publicize Solidarity Day as did several local central labor councils in Racine, Eau Claire, Milwaukee, Madison and Neenah. Region 4 UAW pledged continuing support for the embattled locals as did the President of UAW 578 in Oshkosh who participated and helped to promote the event. The driving force behind the event, however, came from two veteran labor and community activists who produce the labor podcast “We Rise Fighting!” https://www.facebook.com/werisefightinglaborpodcast/

Following the rally, strikers and supporters got into dozens of vehicles, many with large “car-topper” solidarity signs with slogans such as “No Borders In the Workers’ Struggle,” “Kicking Ass For The Working Class,” and “Si Se Puede” attached. Caravans then snaked through Racine. As they passed by people got onto their porches to cheer and wave support. The caravans ended up at the Case New Holland factory gates where strikers have been walking the line for almost 8 months. Over one hundred people then continued the solidarity action into the evening.

Before the Solidarity Day, members of Building Unity and We Rise Fighting! co-sponsored a Strike Solidarity School the week prior at the UAW 180 hall. At the bustling union hall, Art Builds took place with strikers and their loved ones, retirees and community members made signage for the rally and cultural presentations. Meals and media interviews also took place.

It is hoped that this kind of labor-community solidarity will continue to build against union busting and all the other anti-people attacks that the working class of Wisconsin and across the U.S. have been subjected to for many years.

David Sole from Detroit, Retired is a former UAW Executive Board member at UAW Local 15 (Fisher Body Fleetwood Plant) and Co-Chair of the Stop Plant Closings Committee of the local. He served as President of UAW Local 2334 from 1995 to 2008. Sole is also a Co-Founder of the Moratorium NOW! Coalition and Michigan Emergency Committee Against War & Injustice (MECAWI) 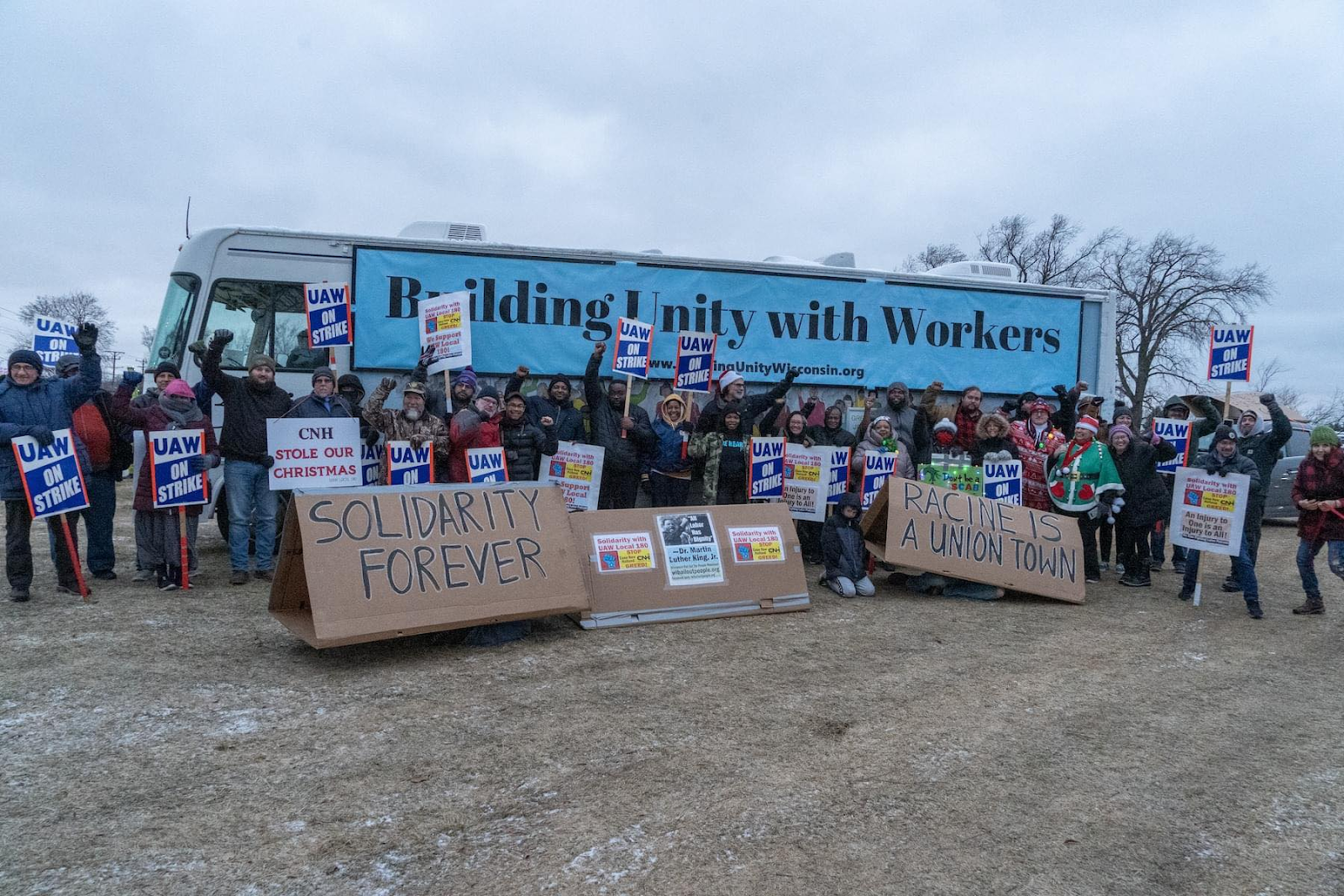