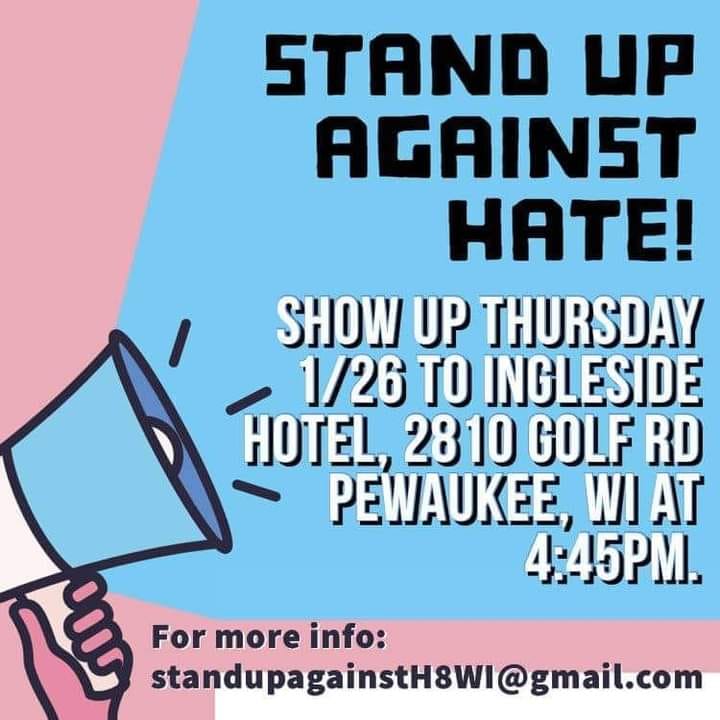 Parents on Patrol Wisconsin is hosting an anti-transgender propaganda event called “Stolen Innocence” at the Inglewood Hotel in Pewaukee, WI. The event is co-sponsored by the national nonprofit group No Left Turn in Education. Both groups claim to want to educate parents about the “insidious ideology infecting your children’s education” and that public schools are “sexually grooming students.”

Event flier for the “Stolen Innocence” anti-transgender hate panel on 1/26/2023 at the Ingleside Hotel in Pewaukee, WI

The so-called panel of experts includes Marissa Darlingh, the former Milwaukee Public Schools counselor who was fired last September for threatening, intimidating, and abusive comments she made at an April 23, 2022 anti-trans rally in Madison, WI.

Marissa Darlingh was fired in September 2022 over a speech she made regarding “gender identity ideology” at an anti-trans hate rally in Madison, Wisconsin.

In a video of the gathering posted to YouTube, Darlingh identifies herself by name and as a Milwaukee Public Schools elementary counselor and says “f— transgenderism,” as well as the following comments:

“On my dead f——- body will my students be exposed to the harms of gender identity ideology. Not a single one of my students under my f—— watch will ever, ever transition socially and sure as hell not medically.”

Darlingh also stated she would not refer to transgender and nonbinary students by their chosen names and personal pronouns. Despite losing her job and potentially having her counseling license revoked, Darlingh says she stands by her comments.

Other panel experts include:

HERE’S WHAT YOU CAN DO TO HELP:

“Hello, I’m calling to encourage the Ingleside Hotel to reject bigotry and cancel the “Stolen Innocence” event that you are hosting on January 26th. This event is being put on by Gays Against Groomers and other anti-LGBTQ+ hate groups who sow fear and disinformation in our communities. Their actions cause direct and serious harm to queer and transgender youth and their families. Please do the right thing and cancel the booking for this event.”

You can also email this same message to info@theinglesidehotel.com.

This option limits how much money the panel can receive for this event, and prevents their anti-trans hate and propaganda from reaching new audiences in our community. General admission tickets are $12.24 each (including fees) and can be purchased through this Eventbrite link. Each ticket purchased is a form of disruption that shows transphobia is not welcome here.

Show up on Thursday, January 26 by 4:45 PM at the Ingleside Hotel, 2810 Golf Road Pewaukee, WI 53072. If you are a medic, can be on jail support, or have security experience, please speak up! We HAVE to show the Christofascists they are not welcome in our communities. We CAN and WILL overwhelm their hate!

More details on this option will follow. Stay tuned!