Wisconsin Network for Peace and Justice has arranged for buses from Madison to West Allis.  Bus fare is $15, but no one will be turned away for lack of funds. Call 608-250-9240 to reserve your seat.

The WI Bail Out The People Movement has been receiving many inquiries from the corporate media regarding the anti-Nazi counter-protest in West Allis Sept. 3, 2011 (see below for more information, flyers, posters & placards.) Members of the general public have also been contacting us as well with questions regarding the Nazi’s, Hitler, fascism etc. Thus we are making available the following resources which give a clear, honest and accurate rendering of the origins and danger of Nazism and other forms of fascism.

The Rise Up! Wisconsin Collective

Call for Submissions: Anthology showcasing radical and progressive stories and voices from the 2011 Wisconsin Uprising

The Rise Up! Wisconsin Collective invites you to submit to an anthology which will give expression to the diverse origins and broad participation in the struggle for Wisconsin’s future. Since Gov. Walker’s assault on us all, there has been increased media attention on our state be…cause of the mass protests by organized labor, community groups, and students. Recent attention has turned to the electoral field as recall elections proceed. But very little is being written or published that approaches the politics and history of Wisconsin’s popular uprising through a radical lens. By “radical,” we mean getting at the root of a problem and transforming it into a community we can all participate in and be a part of. It also means viewing the assault by the Republicans and corporations as tied to the restructuring of global capitalism, and the parallel movements for survival by Wisconsin’s marginalized communities.

Our hope is to create an anthology that illuminates the origins of Wisconsin’s popular struggle as a consequence of interlocking grassroots work. We are especially interested in hearing from progressive workers as well as organizers from immigrant, indigenous and communities of color, LGBT, disability and women’s communities. What we hope to show is that this is not just a “union” struggle, in a restrictive sense, but a struggle to redefine progressive politics itself.

Ideas for submissions could include:

Please send submissions and a short bio including contact information (name, email, or the best way to contact you) in Word or PDF as well as within the body of the text to: riseupwi@gmail.com Please put “Rise Up! Wisconsin Anthology submission + [your last name]” in the subject line.

* We recommend keeping your submissions to under 10 pages – please contact us if you intend to submit something larger.
* We accept previously published work, but preference will be given to voices that have fewer resources for having their voice in print.

Please forward this call to those you think would be interested! 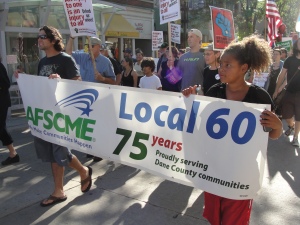 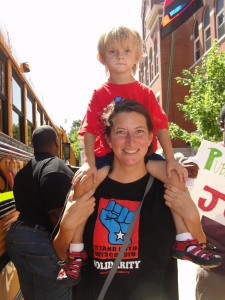 Here is the timeline for the L.U.V. BRIGADE’s Sept. 3, 9:15 a.m.-12:15 p.m. activities at Red Arrow Park (across from the Milwaukee city hall). After the clean up of the park, there will be transportation to West Allis city Hall for the counter-protest against the Nazi’s.

This week (the week of August 28-Sept. 3) West Allis residents and progressive activists will hit the streets of West Allis to distribute “Jobs Not Hate” anti-Nazi counter-protest flyers and posters. Look for the “West Allis Says NO To Racism & Union-Busting” banner. We will be talking to residents, small business owners and others in efforts to mobilize for the “Say NO To Nazi Hate” counter-protest rally scheduled for 1 p.m. Saturday, September 3 at the city hall in West Allis. If you are interested in distributing leaflets, going door-to-door, helping at the counter-protest and/or other tasks, contact the WI BOPM at: 313-559-7074 or Peace Action Wisconsin at:(414) 964-5158.

Don’t let the Nazi’s be unopposed when they come to West Allis. Defend the unity that brought a hundred thousand people to Madison to fight the union-buster Walker. Say NO to racism! We need JOBS not Hate! Join the counter-protest against the Nazi’s.

Alert! Demonization and Repression of the Campesino Movement of Lower Aguan.

The news published today in the La Prensa newspaper under the title The ‘Commander’ has 300 men under its orders in Aguan, is part of a campaign aimed at creating a war scenario in Honduras with the intention of strengthening the plantation model based on the accumulation of lands and exploitation of the workforce, and which produces enormous profits for a small group of business owners in palm oil production.

The agrarian conflict in Honduras has become extremely polarized following the Agriculture Modernization Law of 1992, which made it possible to exceed existing limits for land possession, and resulting in the creation of enormous plantations concentrated in the hands of Miguel Facussé (known as the “palm oil death farmer”), Reynaldo Canales and René Morales Carazo.

In Honduras there are currently more than 600 hundred thousand landless families, and there is no agricultural strategy from the State to solve this serious social issue.

The crisis in Lower Aguan emerges as a consequence of the plantation model, in existence in Honduras since the beginning of the 20th century when the banana companies appropriated the country’s rich fertile valleys. In the 21st century, the biofuel boom has repeated the exploitation patterns of the past, with the aggravating factor that this time millions of people are being dispossessed of their lands.

Militarization under the auspices of the Xatruch II Coordinated Operations Force, and the presence of paramilitary forces growing with impunity throughout the region, combined with the reinvigoration campaign by media affiliated with the Interamerican Press Society (SIP, in Spanish) denouncing the presence of guerrilla groups, makes us fear a military aggression against our campesino settlements in Lower Aguan, especially the ones located on its the left bank of the river.

The news about the presence of the Commander and the 300 armed men emerged from the fertile imagination of journalists and intelligence organizations, and brings discredit to the Armed Forces and the Minister of Security, who came to exercise strict control over the area, particularly since the beginning of the Porfirio Lobo administration, with its Colombian advisers in “Democratic Security”.

The violent expulsion that took place in the Rigores settlement, in which 114 houses, the local church and school were destroyed, is a clear sign of the attitude being adopted by the palm oil “death farmers,” their hired assassins and the states’ repressive forces.

We, the members of the campesino movement of the Left Bank of the Lower Aguan Valley, fear for the integrity of our lives and settlements, in view of the wave of repression aimed at pleasing the power elite who blame the situation in the Aguan for the disappearance of investments from the foreign and national capital in the country, and arguing there is no protection for private property.

This is an Emergency Situation – in order to prevent a massacre in Lower Aguan, please help by sending letters to the Honduran authorities with the following requests:

Please send your letters to:

Please send a copy of your letters to the following email addresses
mucamargenizquierda@yahoo.es
cncnoticia@yahoo.es
Thank you very much for your solidarity.

More information on this situation will be forthcoming. We wanted to alert the progressive movement immediately. There will be a campaign to drop these bogus charges and we will need your help.

Updates will be sent via email and posted to the blog: www.wibailoutpeople.org.

ALERT: Two activists were arrested at an anti-Scott Walker protest today at Messmer school in the Riverwest neighborhood in Milwaukee, one of whom is Bryan G. Pfeifer, an organizer with the WI Bail Out The People Movement. He was charged with Resisting/Obstructing an Officer.The WI BOPM would first like to thank the labor-student-community supporters who came to and called the police station on Brother Pfeifer’s behalf and are offering other support. We are still working on finding the other person arrested and are in the process of obtaining legal counsel. Brother Pfeifer has been a Riverwest resident off and on since 1997, is a longtime progressive activist both in WI and other areas of the United States and is an internationally known independent journalist/photographer.The WI BOPM and allies will be fighting these bogus charges which are an attempt to intimidate the progressive political movement in WI and beyond. We will not let our solidarity to be broken! We will not be intimated! Keep building our movement sisters and brothers! An Injury To One Is An Injury To All! Si Se Puede! The People, United, Will Never Be Defeated!

Hundreds of protesters came out in the Milwaukee neighborhood of Riverwest today, August 26, to tell Scott Walker “Get Out You’re Not Welcome.” Virtually the entire neighborhood around Messmer school where Walker visited, was out on porches, on the streets, the sidewalks, and the alleys behind the school to tell the union-buster to get out of their neighborhood. The residents of Riverwest feel Walker’s visit is an extreme provocation after he signed the union-busting bill known as Act 10 and pushed through the 2011-13 state budget with the worst cuts to social safety nets in state history. Riverwest is one of the most diverse neighborhoods in Wisconsin with many people of color, LGBTQ people, women, children and seniors many of whom will suffer greatly and may even die due to Walker’s union-busting and austerity actions which are being pushed by the banks, corporations and the pentagon. Instead of lying down and taking the attempted union-busting and budget cuts without a fight, the glorious poor and working people of Riverwest today showed with their power-just like the people of WI have again and again-that they are not going away and they are fighting back. This is just the beginning of the people’s resistance!