It’s a major victory for the #FightFor15. Celebrate with us by sharing this image on Facebook right now.

Five years ago, when 200 New York City fast-food workers first walked off the job for $15/hour and union rights, nobody gave us a shot.

Since then, we’ve spread this movement to every corner of the country and beyond fast-food. We did what they said we couldn’t: we won. We won in the states, in the cities, with the big politicians and with the big corporations.

And today, we won $15 an hour for all Target employees. Share this graphic on Facebook now to make sure the world knows that organizing works: 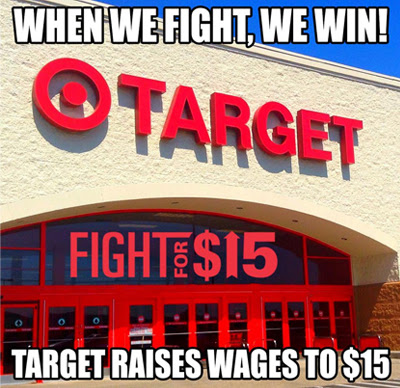 With today’s decision by Target to pay employees at least $15/hour, our momentum is unstoppable.

If Target can pay $15/hour, billionaire corporations like McDonald’s can do the same.

We won’t stop until everyone, everywhere, wins $15/hour and union rights.

Thanks for standing strong.