“The weapons made here are used to maintain Israel’s system of apartheid and ensure the ordinary people of Gaza are kept in an open air prison.”

Pro-Palestine activists occupied a weapons factory in Oldham, Greater Manchester Monday as part of annual protests in solidarity with Palestine. The factory produces a number of high-tech equipment for the Israeli armed forces.

“They work closely with the Israeli military to develop increasingly lethal weapons, which are then tested on Palestinians and sold as ‘battle-tested’ to governments around the world, including the British government…It is deplorable that they have four factories in the UK where they are able to manufacture their deadly weapons with impunity.” said activist Emily Davis.

Protesters blocked roads around the factory and occupied the roof unfurling pro-Palestinian banners. The factory in Greater Manchester has been owned by Elbit Systems, an Israeli defense company, since 2007. The factory exports a number of weapons to Israel, including tank parts and white phosphorous, a chemical weapon which is banned under international law.

“The weapons made here are used to maintain Israel’s system of apartheid and ensure the ordinary people of Gaza are kept in an open air prison. As Elbit profits from their deaths and suffering, it is the duty of people around the world take action in solidarity,” said protester Ben Hart to the Morning Star newspaper.

Another protester Janet Hawkes spoke to the local Manchester Evening News explaining the objectives behind the demonstrations. “We want to send a message to the UK government. We want Elbit out of Greater Manchester.”

Elbit has long been targeted by the BDS movement. In 2014, the authorities in the Brazilian state of Rio Grande do Sul announced that they would cancel a large contract with the Israeli company following pressure from social movements.

“Our government has always given centrality to the promotion of peace and human rights and considers the demands of the social movements an important voice that needs to be heard. Today’s announcement is a logical consequence of this,” Tarson Nuñez, a member of Brazil’s Workers Party (PT), and then a member of the Brazilian government, said of that decision against Elbit. 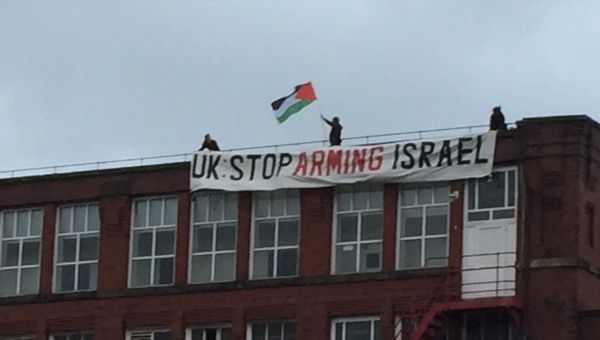