For more than a month, people stayed at the Venezuelan Embassy in Washington, DC to protect it from right-wing forces who have been trying to orchestrate a coup in Venezuela with the aid of the US.  While people occupied the embassy, others supported them from outside where they were confronted by a right-wing mob and police. The electricity was shut off, they tried to deny them food and used severe intimidation.

After 37 days, and in violation of international law, the police entered the embassy and arrested Kevin Zeese, Margaret Flowers, Adrienne Pine and David Paul.  They all now face large fines and the possibility of a year in prison.  Our movement must come together to defend them from these charges and help deter such criminal behavior by the United States government in the future.  A movement-wide defense committee has been established to raise funds, to get out the truth about why the courageous embassy protectors were there, and to expose the government’s lies and abuses.  The web site of the defense committee can be found here: https://defendembassyprotectors.org/.

The defense committee estimates that the legal costs will be about $50,000, so our movement needs to raise this.  Of course, the government has unlimited amounts of your tax money to prosecute them.  On the right-side of the web site you and your organization can endorse the campaign and make a much-needed donation. Also, you can download the flyer from the web site.

Here is a song written for the Collective by Cuban singer Landy Silverio. 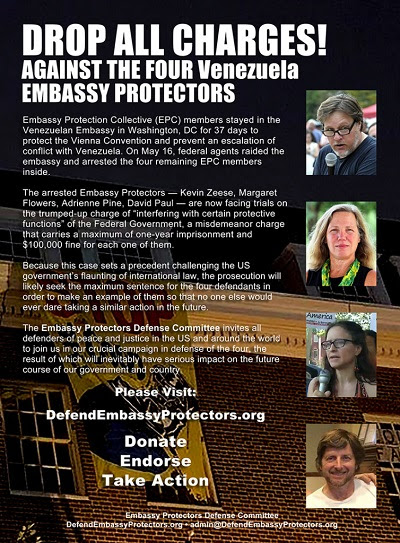