Around the weekend of July 13 and 14, actions took place in many cities across the country.  Additionally, events took place in three other countries in response to the call from UNAC.  The actions were organized around the demands of Hands off Iran and Venezuela, End the Sanctions and Bring all US Troops Home Now.  As the date of the actions approached, Trump announced raids against immigrants and refugees in many US cities and UNAC added the demand of Stop the Raids and Deportations.  For a list of cities where actions took place, please go here.

As the US moves closer to a military conflict with Iran and continues its crippling sanctions against Iran and Venezuela, it is very important that the antiwar movement stay in the streets and show a visible opposition from the people of this country as our government and both major political parties push for war and ever increasing military spending. 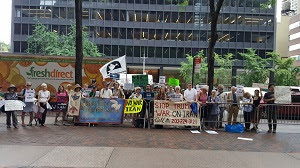