The summer 2019 rebellion in Puerto Rico that forced former governor Ricardo Rosselló to resign and reconfigured the country’s political will and imagination also put the archipelago in the uncommon position of being relevant to the U.S. and international press. This coverage has frequently discussed—with good reason—the horizontal collective, creative, and diverse nature of the popular organization and execution of the protests. But these discussions have not delved sufficiently into the historical school of political dissidence, artistic protest, and democratic organization located in the interior of the archipelago, at the University of Puerto Rico (UPR).

In the recent political context, the 2016 approval of the PROMESA law enabled a new form of U.S. imperialism: the imposition of the Fiscal Oversight and Management Board (FOMB), known locally as “the Junta.” The board’s central goals are to hand Puerto Rico over to markets and to pay off bondholders without even brokering an audit of the debt. In other words, the body aims to more clearly adapt the country to neoliberal capitalism. Since 2016, the leading voices in the resistance against PROMESA and the Junta have been those within UPR—above all, the student movement—as well as activist collectives that formed at UPR or otherwise connect their development to the institution. For that reason, the summer rebellion was in part a result of this trajectory of struggle from UPR.

That’s also why, for those of us who carry traces of UPR in our lives or who continue to be involved in its operation, it never has come as a surprise that the colonial powers of the Puerto Rican government, its accomplices in the university administration, and the unfettered interests of the dominant economic regime have reacted with particular cruelty. Recurring student mobilizations at UPR—most recently in the strikes of 2010, 211, and 2017—managed to create local and, to a certain extent, international awareness of how various administrative and government measures and decisions have threatened accessible public education. However, the scenario is radically different for teaching staff. Despite the work of certain organizations such as the Association of UPR Professors (APPU) and PROTESTAmos, there is no tradition of a “teachers’ movement” at the institution. Therefore, the real condition of adjunct teachers—“fixed term,” “temporary,” or “on contract”—at UPR is unknown to many, and the measures that make their lives precarious could be promoted more vigorously in a political environment with scant opposition…. 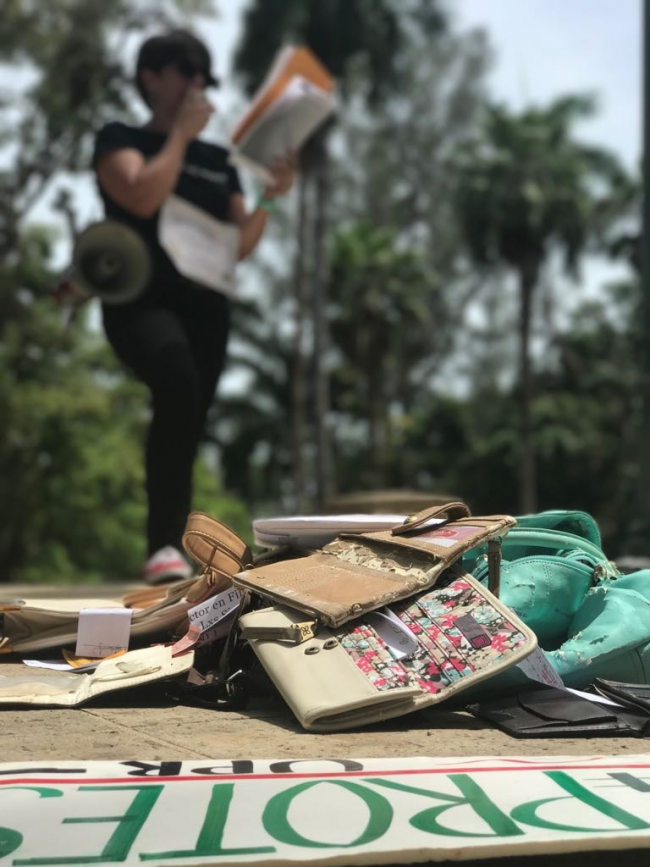 Contract instructors demonstrate at UPR-RUM in an action called Cartera Pelá in 2017. (Photo by Christopher Powers)