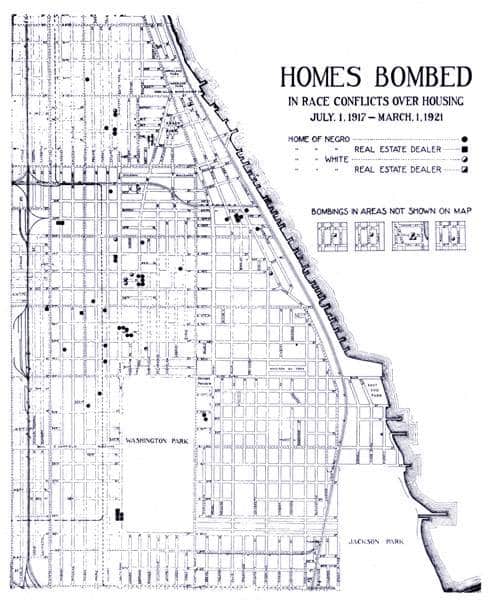 A fundamental change in the composition of the U.S. workforce was the Great Migration of African Americans from the South to Northern cities.

With the outbreak of World War I, factory owners lost Eastern and Southern Europe as a source of exploited workers. For the first time, Black people were able to get jobs in many Northern plants.

This sudden growth combined with segregation allowed landlords to jack up rents on their overcrowded properties. Real estate moguls tried to stop African Americans from moving into white neighborhoods.

Between July 1917 and March 1921, 58 Black homes were bombed. Among the few terrorists arrested for the bombings was James Turner, a clerk at the real estate firm of Dean & Meagher. A six-year-old Black child was killed when a bomb was thrown into a building on Chicago’s Indiana Avenue.

Decades later, real estate sharks prefer setting fires to throwing bombs. Between 1978 and 1981, 41 people, including 30 children in Hoboken, N.J., were killed by arsonists. The Latinx population of this small city dropped by half.

The Chicago bombings often followed racist meetings like the one organized by a “property owners’ association” on May 5, 1919. A real estate agent urged whites to “stand together block by block” against the “invasion” of African Americans seeking homes.

Two weeks later, the home of the renowned actor Richard B. Harrison and his family was destroyed on May 16. Harrison was most famous for his role in the Broadway play “The Green Pastures.”

Against a backdrop of racist newspapers and politicians, the  campaign of real estate crooks sought to provoke a hysteria among whites. A result was that the Black teenager Eugene Williams could be killed for swimming off the “wrong beach” of Lake Michigan.

Why did it take 50 years after the Civil War for Northern industry to exploit Black workers? Andrew Carnegie recruited workers from the Austro-Hungarian Empire for his Pittsburgh steel mills. Why didn’t Carnegie seek Black or white employees from the U.S. South?

Northern capitalists needed Black and white labor to stay in the South. Cotton production grew from 4 million bales in 1870 to over 16 million bales in 1911. Even though U.S. manufacturing exports grew at a more rapid rate, cotton still accounted for 29 percent of U.S. exports in 1911.

Employment in Southern logging, sawmills and tobacco factories also boomed. Yankee corporations grabbed much of the profit. Both the Southern Railroad, (now part of the Norfolk Southern), and the steel mills around Birmingham, Ala., were effectively controlled from J.P. Morgan’s banking house at 23 Wall Street.

As World War I began, Black labor was summoned North. But Chicago’s ruling class continued to use racism to pit workers against each other.

The packer Phillip Armour bragged that he sought to “keep the races and nationalities apart after working hours, and to foment suspicion, rivalry, and even enmity among such groups.”

Armour was filthy rich. His packing plants were just plain filthy. In 1898, when the U.S. invaded Cuba, Puerto Rico and the Philippines, more U.S. soldiers died by food poisoning from Armour’s tainted pork and beans than were killed by gunfire.

The Democratic machine and the race riot

Just as Wall Street ran New York City for generations through the corrupt Tammany Hall political machine, so did Chicago’s wealthy and powerful rely on the Democrats.

The living shadow of the 1919 “race riots” was the Chicago Democratic Party machine. Even decades later, a whole layer of this apparatus — alderman, judges, ward bosses and the like —c ould trace their careers to membership in the neighborhood “athletic clubs” that sparked the violence.

These clubs were sponsored by elected officials like the racist Cook County commissioner, Frank Ragen. His “Ragen’s Colts” killed and wounded Black people. They were like the fascist gangs that were being formed in Italy and Germany.

The coroner’s report emphasized the role of these clubs:

“Responsibility for many attacks was definitely placed by many witnesses upon the ‘athletic clubs’ including Ragen’s Colts, the Hamburgers, Aylwards, Our Flag, Standard … and several others. The mobs were made up for the most part of boys between 15 and 22.

Among the members of the “Hamburg Social and Athletic Club” at the time was 17-year-old Richard J. Daley, who would be elected six times as Chicago’s mayor.

Crucial to Daley’s political ascent was winning the presidency of the Hamburgers in 1924.

This racist swine was still mayor when he finally died in 1976. One of his sons, William Daley, became President Bill Clinton’s secretary of commerce and helped drive the North American Free Trade Agreement through Congress.

Another of his sons, Richard M. Daley, was elected to his fourth term as Chicago’s mayor in 1999, the 80th anniversary of the “race riots.”

Sources: “Race Riot, Chicago in the Red Summer of 1919” by William M. Tuttle Jr.; “The Kerner Report: The 1968 Report of the National Advisory Commission on Civil Disorders”; “A Few Red Drops, the Chicago Race Riot of 1919” by Claire Hartfield; “The Chicago Race Riots, July, 1919” by Carl Sandburg; “Down on the Killing Floor, Black and White workers in Cicago’s Packinghouses, 1904-54” by Rick Halpern; “Boss, Richard J. Daley of Chicago” by Mike Royko.

Next: What did the unions do?