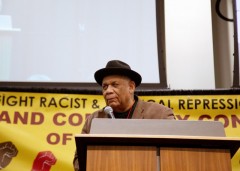 Frank Chapman. (Rohan Ayinde)
Chicago, IL – More than a 1200 joined together November 22, at the hall of the Chicago Teachers Union, to refound the National Alliance Against Racist and Political Repression. The newly refounded Alliance will center its efforts on building the fight against police crimes and for community control of the police, and it will campaign for the release of political prisoners and the wrongfully convicted.

Longtime leaders of the Black liberation movement, Angela Davis and Frank Chapman, along with elected officials, trade unionists, and other progressive activists addressed the packed rally that opened the conference.