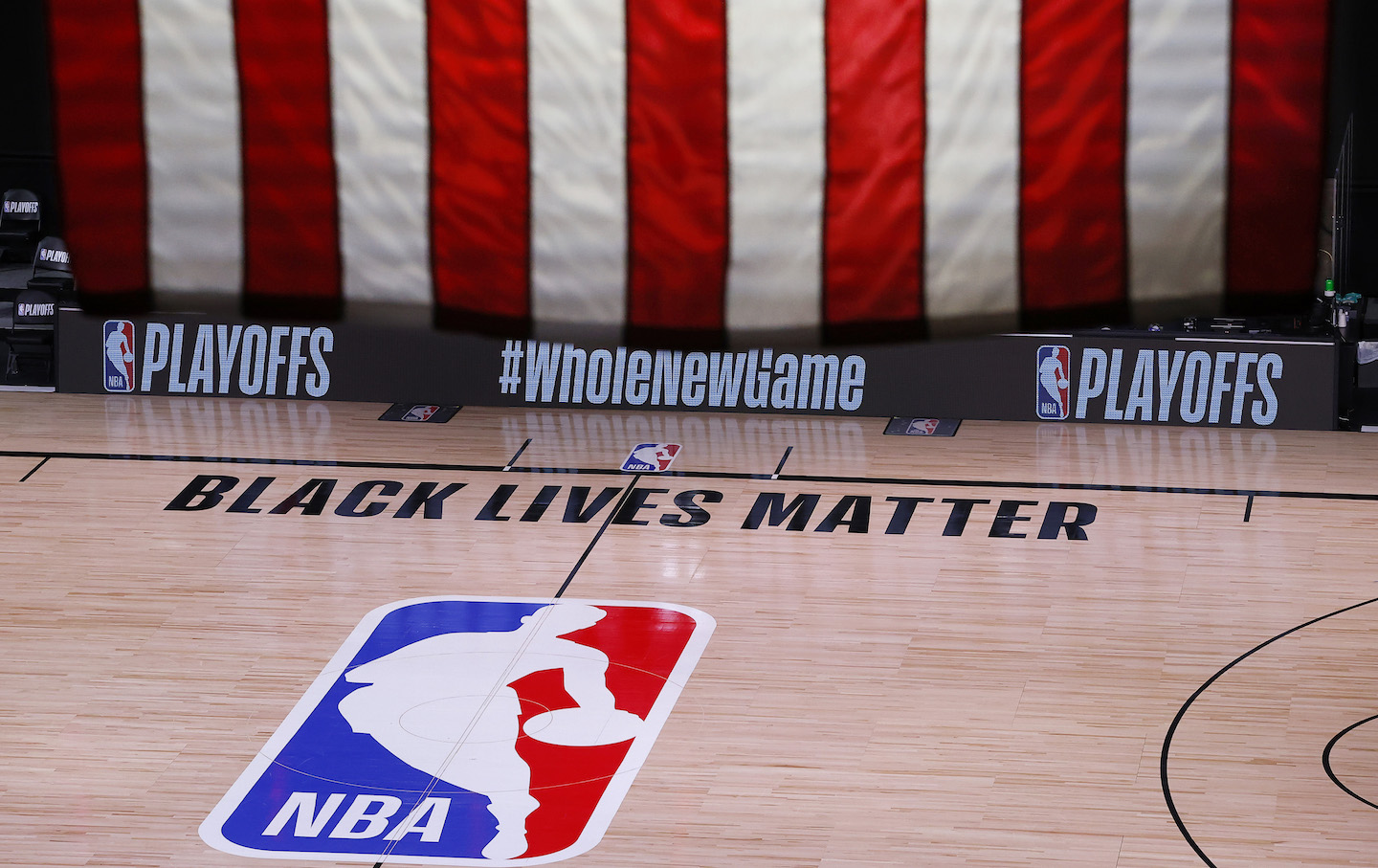 This is without precedent in the history of sports: The Milwaukee Bucks, arguably the best team in the NBA, have gone on strike, refusing to leave the locker room for game five of their playoff series against the Orlando Magic. Their decision stopped the sports world on a dime, and shortly after the news, the Milwaukee Brewers announced that the team would also skip tonight’s MLB game. The Brewers and Bucks are refusing to play in solidarity with the demand for justice for Jacob Blake, who was shot in the back seven times over the weekend by police in nearby Kenosha.

Immediately, the Bucks’ decision had a catalytic effect on the league. The remainder of the playoff games today, by decision of the players, have been canceled, including the game between LeBron James and the Lakers and the Portland Trailblazers. All NBA players are meeting this evening to discuss whether there will be a season. Call it a wildcat strike, call it an uprising, but whatever you call it, the actions of these athletes have repercussions far beyond sports. When LeBron James tweeted “FUCK THIS MAN!!!! WE DEMAND CHANGE. SICK OF IT” in support of the Bucks players, he didn’t get love just from NBA fans. Future congressman Jamaal Bowman and Representative Ilhan Omar immediately endorsed his sentiment.

In addition to the police shooting of Blake, protests are calling attention to the white supremacist violence that has occurred in its aftermath. A 17-year-old Trump fanatic named Kyle Rittenhouse drove to Kenosha from Illinois last night and killed two protesters. Police let him roam the streets with an AR-15, only arresting him for first degree murder today.

Many NBA players feared that when they restarted the season in a Covid-free bubble in Orlando the games would distract attention from the nationwide protests that followed the police killing of George Floyd earlier this summer. For the players, after the shooting of Blake, it clearly became too much of a contradiction.

“At the end of the day, if we’re gonna sit here and talk about making change, then at some point we’re gonna have to put our nuts on the line and actually put something up to lose, rather than just money or visibility,” Toronto Raptors guard Fred VanVleet said Tuesday. “We’ve gotta take responsibility as well. Like, what are we willing to give up? Do we actually give a f—about what’s going on, or is it just cool to [have] ‘Black Lives Matter’ on the backdrop, or wear a T-shirt? Like, what does that really mean? Is it really doing anything?” The players were itching to do something, and now they have.

The strike stands in stark contrast to the hypocrisy and authoritarianism on display at the Republican National Convention. Trump’s party wants to push this idea that everything is fine in America, except for “anarchists” who are burning down “Democrat cities,” and a Black “invasion” of the suburbs. The pandemic is in the past and the police are heroes. These are obscene lies, but far too many of us feel helpless to say or do anything except shout into the wind, or try to burn it all down. The NBA players are showing that this is a wretchedly dysfunctional country, whose horrors make even the playing of sports too much for athletes to bear.

These are not the first athletes in history to point out the gap between how Black athletes are loved on the field and how they are treated off of it. The slogan of the 1968 Olympic Project for Human Rights was “Why should we run in Mexico City only to crawl home?” Bill Russell and the Celtics were a part of sitting out a game in Lexington, Ky., along with the St. Louis Hawks in the early 1960s in protest of the city’s treatment of black players.

There are other examples as well. But as the saying goes, in politics timing is everything. The timing of this strike by the Bucks and now the players of the NBA has the potential to turn politics inside out. They are posing the question that all great strikes pose—to political people who hate sports and sports fans who hate politics, and to white fans who love them on the court but are oblivious to Black lives when the final whistle is blown—“Which side are you on?”

It is a question that is now blaring from every corner of the media landscape. It’s a question all of us are going to need to answer.