Because their business is rooted in large group gatherings, entertainment venues were one of the first industries to be completely shut down in early March and will be one of the last to return. Hundreds of thousands of businesses employing millions of people are at risk, warn entertainment industry unions including IATSE Local 22 here in Washington. “If we do not receive government assistance the live events industry will literally collapse,” said Local 22 president David McIntyre. Two events this Tuesday (see Calendar) will highlight – one literally — efforts to push the RESTART Act, which would extend unemployment benefits to workers displaced by COVID-19. “We Make Events #RedAlertRESTART” will rally from 6-10p on the Mall and then from 9p-midnight, downtown buildings will be lit up with red lights, both to highlight the urgency of the crisis and to showcase the lighting skills of IATSE members. 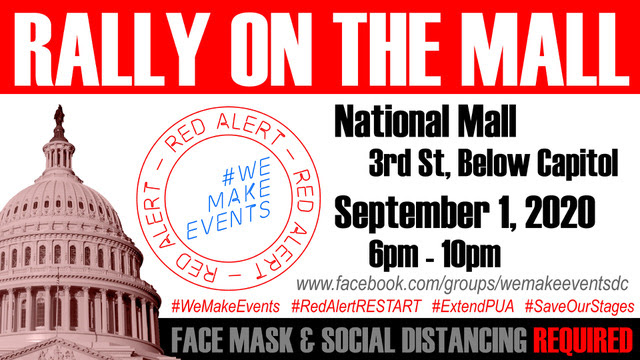 Abayomi Azikiwe, editor at the Pan-African News Wire, made the remark during a phone interview with Press TV on Sunday while commenting on a tweet by Iranian Foreign Minister Mohammad Javad Zarif.

Iran’s foreign minister has said that the “all options on the table” threat, which has been a hallmark of the US policy toward other countries, is now being used against citizens of the US itself, expressing hope that this would serve as a “wake-up call” for the Americans.

Zarif made the remarks in reaction to statements by acting US Homeland Security Secretary Chad Wolf who told ABC’s “This Week” on Sunday that “all options continue to be on the table” to end violent protests in Portland, Oregon, including sending in federal law enforcement assistance.

He described Washington’s frequently-used “all options on the table” threat as a “staple” of the country’s foreign policy, which “simply means the law of the jungle: disregard for a fundamental principle of int’l law: Non-Use of Force.”

Azikiwe said that “this is indicative of the US policies over the last several months. The Trump administration has sent federal law enforcement agents into the urban areas where there have been demonstrations against police violence and vigilante violence against African Americans and other people.”

“So, therefore, it’s not surprising that they would make this threat because they’re already carrying it out. And we see the results of it in regard to the green light that has been given to law enforcement agencies all over the United States to crack down on the demonstrations. We saw what happened in Kenosha, Wisconsin, where two people were killed by a 17-year-old white vigilante who was from another state. Also, we saw in Portland someone killed last evening,” he stated.

“During the course of the mass demonstrations and rebellion since the police execution of George Floyd on May 25, there have been well over 30 people killed as a direct result of the unrest. So I think they recognize what is at stake,” he added.

“The Trump administration is doing everything it can to suppress voter turnout in November. They’re also trying to drive the protesters off the street. And at the same time to ignore the great public health crisis that exists in the country, the worst of over a century. And we have over 180,000 people who have died from COVID-19, several million cases. And the education sector, public health, and services are in deep crisis,” he said.

“So, people have to organize on their own, they have to mobilize to ensure that further civil rights and human rights by the United States,” the analyst said.

“The government is paralyzed between the House of Representatives and the Senate on the one hand, and the White House and the House of Representatives on the other hand. So this is a very political war that’s going on inside the United States and the outcome of it will portend much, not only for the US domestic policy but also foreign policy as well because the domestic policy is reflected in the foreign policy,” he noted.

“So if you have an aggressive domestic program to crack down on dissent that is going to be projected as well on a global scale,” he concluded.

Press TV’s website can also be accessed at the following alternate addresses:

The struggle to defend the Garifuna communities and OFRANEH and to demand the return of the disappeared defenders of the Garifuna communities continues more than 30 days after the young land and territory defenders were kidnapped. I have included the link to the latest (August 24th) HSN statement HERE
We will be sending out new email action for people to contact Honduran and US officials on Tuesday. We will send out more information about other actions also.
In Honduras, OFRANEH and the communities continue the protests and pressure. On Friday August 21 there was a protest in front of the offices of the DPI (Bureau of Investigative Police) in Tegucigalpa and road blocks organized by the local communities, all were threatened by police.
The International Garifuna Council with OFRANEH organized actions at Honduran consulates in numerous US cities (Seattle, Houston, Atlanta, San Francisco and Los Angeles and a few days earlier there was another action in New York City.  The IGC open letter from the Garifuna community living abroad is attached to this email.
HSN on Facebook and twitter @hondurasol has been updating regularly, and Karen Spring’s Honduras Now podcast has two shows dedicated to the forced disappearances and the Garifuna communities’ struggle.
Please share information widely. Thanks to Lalo Garcia of AFGJ for the great graphic – there will be more of those to share as well.
in solidarity,
Vicki Cervantes

OFRANEH is organizing for a twitter storm (tuitazo) for
Sunday to coincide with the International Day of the Disappeared on August 30th. I have included the link to their twitter status that can be retweeted below. I also have included their  graphics (created by Lalo Garcia) fo be shared on twitter and also on any other social media you use (Facebook, Instagram, WhatsAp groups etc. ) Please participate and share with your friends and organizations.
The HSN email action that we shared Wednesday is still ongoing so if you haven’t done that yet (or if you feel like repeating it) – please do!.
August 30th Action
OFRANEH’s twitter link
https://twitter.com/ofraneh/status/1299365238693916675?s=20

We will be conducting a picket outside the pain offices of Berrada Properties near the intersection of Brown Deer Rd and N 76th street. We invite all members of the public to join us on the picket line to oppose the unjust evictions being conducted by this multimillionaire slumlord.

Joe Berrada is the biggest slumlord in Milwaukee. He has evicted over 300 people since the pandemic began, putting hundreds of people out on the street, endangering their health and that of the public. But his oppressive and unethical practices did not begin with the pandemic. His buildings had 1,300 code violations from 2010 to 2018 and he was responsible for 12% of all evictions in the city in 2017. He is known for evicting tenants for the smallest and most trivial reasons.

We demand that Berrada Properties
– cease all evictions for the duration of the pandemic.
– keep units clean and updated and provide timely and competent repairs when requested by tenants
– enter into a neutral mediation process with tenants if there is financial hardship prior to seeking an eviction order
– work with tenants to get evictions off their records
– commit to not retaliating against tenants who bring forward complaints

Thanks to everyone who joined our caravan yesterday to Kenosha to demand #JusticeForJacobBlake!

Let’s ALL exercise our right to support Black Lives Matter in ways both large and small. Come “Stand” with us rain or shine every Wednesday and Saturday from 12:00-1:30 p.m. on 27th & Oklahoma. Bring your own sign and chair if you like.

This small protest is perfect for folks like me who are unable to attend long protests and rallies. Remember: EVERYTHING WE DO MATTERS.

THIS IS A CRITICAL TIME FOR THE MILWAUKEE COMMUNITY.

• We are fighting racism and police brutality
• We are fighting the worst pandemic in 100 years
• We are losing businesses, jobs, and income
• While we prepare for a presidential election, state legislators are trying to suppress our votes and our voices
• National leaders want to stop mail-in votes by cutting postal services

We will overcome as an army of faith with the power of 100,000 souls to the polls. Join us! Celebrate our strength to build a power bloc that can save our community.

Photos and Video: Wisconsin Bail Out The People Movement