Please sign the NEW petition for Lynne Stewart . Your signature will send a letter to Bureau of Prisons Director Samuels and to Attorney General Holder requesting that they expedite Lynne Stewart’s current application for compassionate release. The NEW petition is at https://www.change.org/petitions/new-petition-to-free-lynne-stewart-support-compassionate-release (Please follow the link on the first petition site in case the link is stripped from this message.)

A Message from Lynne Stewart:
From Deep in the Belly of the Beast … that is, Texas.

Now another month has passed and I am getting increasingly irritable that these jokers are so cavalier with my life and what time I have left. (I also am getting weaker.)

My application for compassionate release is moving but glacially (Are there any glaciers left? Only in the bureaucracy…). We learned that the request has left the General Counsel’s office of the Bureau of Prisons in Washington and is now being considered by an “Independent Committee” (whatever that means). From there it will ostensibly go to the Director, Mr. Samuels, for the final recommendation and request for a motion to the Judge.

As you can appreciate there is still plenty of room for slips between cup and lip. I truly understand that I, with the strong and consistent support of all 30,000+ of you, do constitute a “threat” in their small universe. That is to say that, the will of the People cannot be ignored forever. With that in mind, I want to urge everyone to come on out on

OCTOBER 8, TUESDAY, MY 74th BIRTHDAY
FOR A LOCAL SHOW OF OUR COLLECTIVE WILL
IN OPPOSITION TO THE ‘”DEATH PENALTY ”

YOU AND YOUR COMRADES, FRIENDS, ACQUAINTANCES CAN GATHER AT YOUR LOCAL FEDERAL (U.S.) COURTHOUSE OR POST OFFICE TO REMIND THEM THAT WE WILL NOT LET ME DIE IN A JAIL CELL!!!

If you can do this please notify Ralph of your location by sending an email to my web site or to this site. We hope this will be nationwide and we can spread the word of the senseless cruelty in the way the Bureau of Prisons administers a program that is supposed to be compassionate. I may be the “poster child” but this is done on behalf of all the prisoners who are languishing, in pain or worse, trying to go home.

Be out there on October 8. It is already an historic day. Let’s make it More So!!! Let’s Win.

Join us to learn about the political situation and social movement in El Salvador when U.S.- El Salvador Sister Cities visits Milwaukee as part of our Midwest Speaking Tour with community organizer Esmeralda Villalta!

On the 12th anniversary of  the US invasion and occupation of Afghanistan, UNAC, in conjunction with the Afghan Women’s Mission is sponsoring a national tour of former Afghanistan legislator, women’s rights and antiwar leader, Malalai Joya.  Please see the Schedule below.  To get involved, please contact the tour organizer listed for each cities or contact the UNAC tour coordinator at jmackler@lmi.net.

The tour is co-sponsored by UNAC and the Afghan Women’s Mission,
www.afghanwomensmission.org

Baxter Wins Modification Offer, But Still Not Enough
After our spirited demo last month at the Chicago offices of Fannie Mae (see YouTube link), Baxter Jones has won an important concession: Fannie has offered a post-foreclosure mortgage modification on the home in Jackson, Michigan, where Baxter had planned to retire after a disabling car accident left him wheel-chair bound. Baxter Jones vs. Fannie Mae – YouTube
That’s the good news. The bad news is that Fannie is demanding a “standard” interest rate of 4.65% and a monthly payment of $1,200— far more than Baxter can afford on disability income of $1,800 a month. Fannie has refused to reduce mortgage principal or sell the home back to an allied investor who offered to buy the property at market value.

WE NEED TO CALL FANNIE MAE AND DEMAND THEY DO BETTER!
Fannie has the power to do so. A modification subsidized by the federal government’s Home Affordable Modification Program would charge interest of only 2% and require monthly payments of about $700. Instead of reducing principal, it would be collected over a longer term. When he first went into default, Baxter should have been considered for a similar modification under a special forbearance program for people with disabilities, but Wells Fargo, the bank servicing the mortgage for Fannie Mae, foreclosed even though Mr. Jones qualified.
We have moved the struggle forward to save Baxter’s home, but we need to pressure Fannie Mae to do what Wells Fargo should have done in the first place: provide Baxter with a sustainable mortgage modification that matches the HAMP guidelines.
Call Fannie Mae’s regional office in Chicago, 312-368-6200, or call Chris Daugherty, Escalation Specialist, 972-656-8600
Baxter Jones’ loan number is 025 301 6042 . His address is 8789 Rexford Rd., Jackson, Michigan
Tell Fannie to stop the eviction of S. Baxter Jones and provide a low-interest mortgage modification with monthly payments at no more than a third of Baxter’s gross income, matching the HAMP guidelines.

For more information, go to detroitevictiondefense.org

12:30, Brown Bag Talk by Dr. Mark Schuller, UW-Milwaukee, Cunningham 195
Dr. Schuller is an Assistant Professor of Anthropology and NGO Leadership Development at Northern Illinois University and an affiliate at the Faculté d’Ethnologie, l’Université d’État d’Haïti. His research focuses on globalization, NGOs, gender, and disasters in Haiti. He is the author of Killing with Kindness: Haiti, International Aid, and NGOs (Rutgers, 2012) and co-editor of four volumes, including Tectonic Shifts: Haiti Since the Earthquake (Kumarian Press, 2012). http://www.niu.edu/anthro/faculty_staff/faculty/schuller.shtml

4pm, Screening of “Fatal Assistance” at the Oriental Theater, followed by a talk back with Dr. Schuller at the Hotel Foster, 2028 E North Avenue, Milwaukee. / Urban Studies and Africology are community partners with the Milwaukee Film Festival and we are hosting the documentary “Fatal Assistance,” about the failure of international aid to repair Haiti after the 2010 earthquake.  Tickets are $10 at the door. http://mkefilm.org/

Preparations for war are still moving ahead, despite the diplomatic turn that was caused by overwhelming opposition from the U.S. public and the international community. We are holding a regional anti-war protest in Chicago to tell the politicians:

No Killer Drone for Boeing
No New Wars on Syria and Iran
Money for Jobs, Healthcare, and Education, Not for War

Esmeralda Villalta has been working with The Association for the Development of El Salvador (CRIPDES), a grassroots organization made up of over 300 rural communities for the past 13 years. Esmeralda is the coordinator of the Cripdes regional team in the department of San Vicente and a member of the CRIPDES national board whose work has focused on training community leaders, natural disaster preparedness and women’s and youth organizing.

Alexandra Early and Estela Garcia  are the translators of the tour and coordinators for the Sister Cities network, which links 17 cities across the U.S. with organized communities in El Salvador as part of a movement of solidarity.

The environmental and religious movement trying to save El Salvador’s people and fragile ecosystem, corporate irresponsibility by a Milwaukee gold mining company that has ruined the environment, fair trade vs. the CAFTA right for foreign investors to sue governments,
solidarity between Wisconsinites and Salvadorans against predatory mining corporations,
and more. 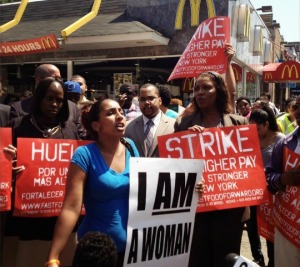