You can learn as much about a man from his critics as you can from his admirers. Henry Kissinger, U.S. secretary of state under Nixon, described Fidel in his memoirs as perhaps the most genuine revolutionary leader in power at that time.

The former Secretary of State and advisor to various U.S. Presidents was referring to 1975 when – to the surprise of the U.S. – Cuba lent its support to the Angolan independence struggle. In the Cold War geopolitics of the time, the Soviets were opposed to direct involvement, while Washington blatantly supported the racist apartheid regime in South Africa. http://theinternationalcommittee.org/ 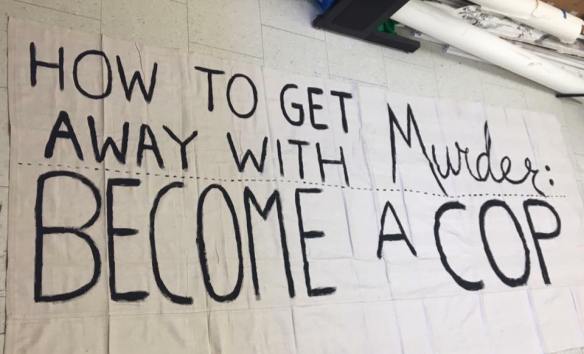 Make It Ungovernable! Protest the Presidential Inauguration in Washington DC
ALL OUT to Washington, DC, January 20 to PROTEST the Presidential InaugurationAfter the most divisive, racist, misogynist, contentious presidential campaign in modern history, Monica Moorehead for President and Lamont Lilly for Vice President urge everyone to converge in Washington, D.C., on Friday, Jan. 20 to protest the inauguration of the next president.No matter who wins the 2016 election, the people must take to the streets. This election year proved beyond a shadow of a doubt that the capitalist system cannot represent the interests of the people. It revealed that democracy under capitalism is a sham.

While Trump and Clinton were fighting among themselves, often like children, Black and Brown people continued to be shot by racist police. Neither candidate ever expressed genuine support for the demands of the Black Lives Matter movement, essential in this period of police terrorism.

Clearly Donald Trump has galvanized racist, right-wing, anti-immigrant thugs. These elements have been stoked, and they will not likely crawl back into the gutter. But we cannot give up on all these workers. They have been misled by Trump, and we should struggle to win their hearts and minds.

Misogyny ultimately became a major issue this election season. At the heart of the “Trumpite” sexism against Hillary Clinton is not just hatred of women, but racism that is central to their odious ideology.

These forces are not reconciled to the historical fact that the first Black president was elected. They erroneously fear the “browning of America.” They think migrants are changing the fabric of “their” society and that they steal jobs, when in fact it is the corporations that lay off and shut factories.

The answer is solidarity and unity of all those who work and struggle for a living. Our enemy is not in the factory or the office but in the board room.

Neither Trump nor Clinton have a real program to address unemployment or underemployment. Neither will order the banks to put families back into foreclosed homes or to lower rents. Neither will unilaterally cancel the student debt. Neither will stop anti-LGBTQ laws from sweeping the country.

Trump is a dangerous buffoon. But Hillary Clinton is a wolf in sheep’s clothing. Her political history is one of war and intervention. She is responsible, along with others, for the coup in Honduras and for war in Libya and Syria. She is historically aligned with the forces that dismantled welfare and led to mass incarceration.

As the economic crisis deepens, what can we expect? Under capitalism not only more of the same, but an intensification of all the ills that are byproducts of capitalism: war, racism, sexism, islamopho¬bia and the exploitation of all workers.

It is very likely that Hillary Clinton will win the election as she has proven her ability to well represent the 1%. We can be assured that in her first 100 days, there will be an escalation of war.

What’s the solution? Unity in fightback! Only our solidarity can push back the 1%! What matters is not who is in the White House, but in the streets.

We urge everyone – Black, Latinx, Native, Arab, Asian and white, women, trans people and men, young and old, queer or straight, documented or undocumented, people with disabilities, in a union or not, of every faith and belief from around the country – to converge in Washington on Friday, Jan. 20.

Join tens of thousands to present a people’s agenda! 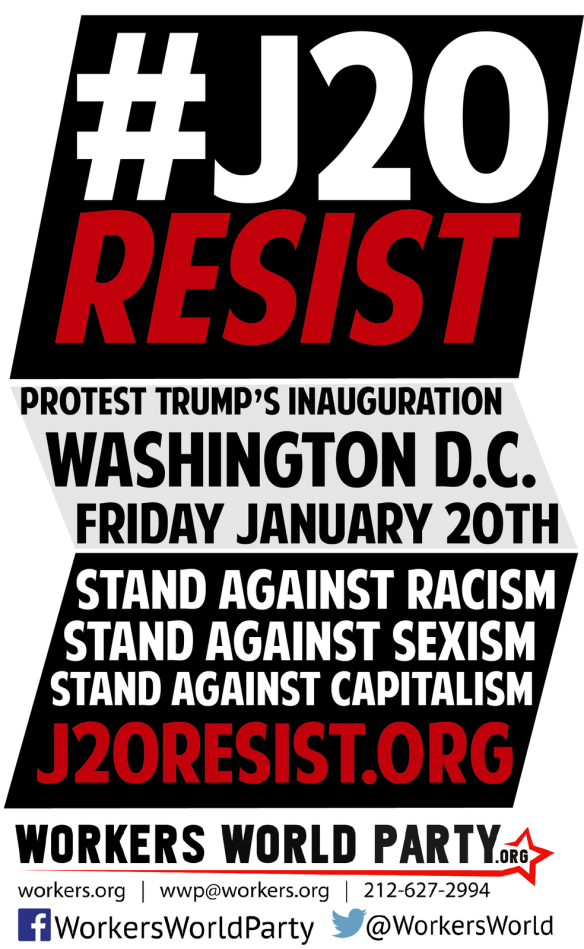 How do we respond to a Trump presidency?
Free & Open to the public
Saturday, Dec. 3. 1pm-3pm
Room B, Downtown Rockford Library

Join Workers World Party in a discussion on what a Trump presidency means for workers & oppressed people and how we can continue to build the movement to smash racism, sexism, xenophobia, and LGBTQ-oppression.

Noon to 1 p.m. at Knapp & Broadway, to stop deportations and separating families.

REMINDER OF THE UPCOMING MOVIE SERIES ON COLOMBIA

Thursday December 1 : MARMATO Red Gym at 4:45 p.m
Chronicles how the townspeople confront a Canadian mining company that wants the $ 20 Billion in gold beneath their homes

Friday, December 2 : IMPUNITY Red Gym at 6 p.m.
Through a series of commission testimonies, footage of paramilitary crimes. and interviews with victims and experts, IMPUNITY shines a light on the brutal history of paramilitary violence.

Sunday, December 4 : EMBRACE OF THE SERPENT Vilas Hall 4008 at 1:30 p.m.
The story of the relationship between Karamakate an Amazonian shaman and last survivor of his people. Nominated for the Best Foreign Language Film at the 88th Academy Awards.

Tuesday, December 6 CHOCOLATE OF PEACE Marquee (Union South) at 7 p.m.
From the seed to the product, the cacao is the narrative thread that takes us through the Peace Community of San Jose de Apartado, sister community of Dane County, Wisconsin, and its stories of violence and resilience and their fight to remain neutral in the face of the Colombian armed conflict.

COME JOIN US! BRING YOUR FRIENDS! ADMISSION IS FREE!

http://www.telesurtv.net/english/index.html
Fidel will be remembered as a champion of the world’s poor, a figure of Latin American integration, and a fierce anti-imperialist.

Throughout the day thousands of Cubans in Havana joined long lines to pay tribute at the Jose Marti Memorial, where a display showing a young Fidel in military uniform was perched among flowers. The Plaza de la Revolucion is the same place where Fidel once delivered rousing, marathon speeches over half a century.

A caravan carrying Fidel’s ashes will depart Havana Wednesday en route to the eastern city of Santiago de Cuba, his final resting place, in a reversal of the leader’s historic journey from Santiago de Cuba to Havana in 1959 to mark the triumph of the Cuban revolution which ousted the U.S.-backed military dictatorship of Fulgencio Batista.

The four-day procession will conclude with a mass event and a state funeral in Santiago de Cuba, where Fidel’s ashes will be put to rest at the Santa Ifigenia Cemetery, which houses the remains of Cuban independence hero Jose Marti and other national heroes. http://www.telesurtv.net/english/index.html

Stand With Standing Rock–Evict Dakota Access!
December is a Global Month of Action in solidarity with the Standing Rock Sioux Tribe in their fight against the Dakota Access Pipeline. We need to act quickly to stop more violence against water protectors and halt the pipeline before January 1. On Friday, December 2 starting at 4 p.m., we will take our message to the U.S. Army Corps of Engineers offices on D’onofrio Drive (near West Towne Mall).

The Army Corps has issued an “eviction notice” for everyone camped on stolen 1851 treaty lands it claims federal jurisdiction over, effective Monday, December 5. The Governor of North Dakota followed up the notice with an absurd “mandatory evacuation order” that threatens to levy fines and block emergency services from the camps, while militarized police continue to attack and injure water protectors. We must tell the Army Corps to immediately rescind their eviction notice that puts the thousands of people who will be at the camp on Monday in danger of life and limb. We will make ourselve visible and audible outside the building as the workday ends.

More information on the Month of Action: https://actionnetwork.org/event_campaigns/nodapl-solidarity-week-of-action?zipcode=19143&country=US