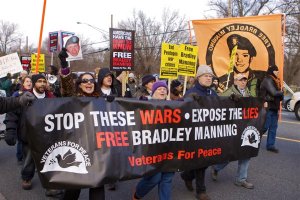 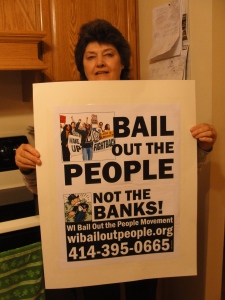 Thanks to Brother Mike Erdmann of WI Jobs Now. 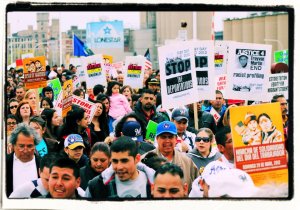 Thousands march on April 29 in Milwaukee as part of May Day activities.

“Humor From My Pen”

The Political Cartoons and Prison Cell of Gerardo Hernandez
Opening May 4 at Dominion Gallery — 7 pm
804 E. Wright St., Milwaukee
Gerardo Hernandez is one of the ‘Cuban Five,’ who since 1998 have been collectively serving a total of four life sentences plus 77 years in U.S. penitentiaries for blowing the whistle on “anti-Castro” terrorists operating out of Miami. Former President Jimmy Carter and ten Nobel laureates – along with grass-roots committees in scores of countries – have called for the Five’s unconditional release. Gerardo (sentenced to more than two life terms) has already spent 13 years in prison – two of them in solitary confinement. What’s more, he’s been denied any and all visits from his family. Yet his unyielding response is one of art and humor – presented here in 32 pieces along with a full-sized replica of his prison cell. For more on the Cuban 5, please visit www.thecuban5.org.

Please join us for the grand opening of this exhibit!
Friday, May 4, at 7:00 pm.
Don’t miss out on a month of great events at the gallery through May 26! For a complete schedule of events throughout the month of May at this exhibit, including films, guest speakers and more, please visit www.wicuba.org.  We hope to see you there! 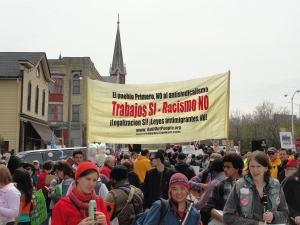 Bail Out The People Contingent in Milwaukee's May Day march April 29, 2012. 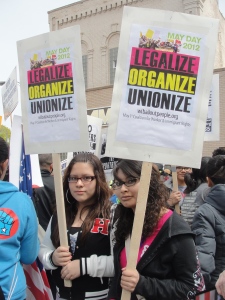 Join us in the “Cycles of Revolution: ¡Brake the Banks!” ride to Chicago, May 13th-22nd, to the NATO summit. Rider applications (found under the “apply now” tab), are due by May 5th. Number of cyclists on the ride limited to 50, so get your application in soon!

On Sunday April 29, Voces de la Frontera will hold our seventh annual May Day Solidarity March,  joining cities across the United States in a week of national actions for immigrant and worker rights.

Voces de la Frontera has consistently organized some of the largest May Day marches in the country since 2006 and in the state’s history, drawing up to 100,000 attendees last year. This year we will have buses with attendees coming from ten different cities across Wisconsin.

This Sunday we march to demand justice in the highest court as the US Supreme Court begins to hear arguments on Arizona’s controversial anti-immigrant law in United States vs. Arizona.  The court’s landmark ruling, expected in June, will determine whether our nation will uphold the historic gains of the civil rights movement or revert back to a pre-civil rights era of second-class citizenship. We also march for an end to the cruel immigration enforcement policies that continue to separate loving families.

In recognition of Wisconsin’s role as a national battleground state, US Congressman Luis Gutierrez (IL) will speak at the state-wide rally at Veteran’s Park in Milwaukee.  He will be introduced by US Congresswoman Gwen Moore. Congressman Gutierrez has been at the forefront of the effort to pass historic comprehensive immigration reform legislation, as well as raise the visibility of the toll of mass deportations on immigrant families.

All candidates for Wisconsin’s gubernatorial race have been invited to the event. Milwaukee mayor Tom Barrett and Kathleen Falk have been confirmed to speak briefly at the Solidarity Stage on 5th and Washington around 1 pm, before the march begins.  Full program details (subject to change) can be seen by clicking here.
In Racine, a Sunday mass will be held in the parking lot of Pick N’ Save prior to boarding the bus to Milwaukee, as a show of support from the faith community.  The mass will be begin at 9:30 am, at 2210 Rapids Drive.  For interviews with attendees of the Racine mass, contact Juan Ruiz at (414) 218-7115.

Marchers will assemble at 12:30 pm on Sunday, April 29, with a short program at at the corners of 5th St. and Washington St.  Marchers will then proceed to Veteran’s Park for a 2 pm rally with Congressman Luis Gutierrez and headlining musical guest, Billboard award winners Kinto Sol. All events are free and open to the public.