This month’s EXPO Meeting will include a presentation by Alan Schultz on the Columbia University Justice Lab’s report on mass supervision in Wisconsin. We will include the testimonies of people who have been directly impacted by Wisconsin’s horrific, racist system of mass supervision. This event will be at Room 108 at Welford Sanders Enterprise Center, 2821 N. Vel Phillips Avenue, Milwaukee, 6 P.M.

The presentation will be followed by a State Budget Advocacy Training led by EXPO organizers. This training is designed to gear people up for the upcoming Budget Hearings held statewide on the Governors Biennial Budget, He will be releasing his budget March 3, 2019 & the Budget Hearings will be announce closely after that date.

We invite our members to have a voice and join us at both the State Wide Budget Hearings and Madison Action Day on March 26, 2019.

You can access the Columbia Justice Lab Report here:
https://closemsdf.org/2019/01/22/columbia-justice-lab-report-on-mass-supervision-in-wisconsin/

The vast majority of Venezuelans oppose military intervention and US sanctions to try to remove President Nicolás Maduro from power, according to polling by the local firm Hinterlaces.

More than eight out of ten Venezuelans oppose international intervention, both military and non-military, in their country, as well as the crippling sanctions imposed by the United States to force leftist President Nicolás Maduro out of power.

According to a study conducted in early January 2019 by the local polling firm Hinterlaces, 86 percent of Venezuelans would disagree with international military intervention. And 81 percent oppose the US sanctions that have gravely hurt the South American nation’s economy.

“Palestine: Unlimited” transformed the walls of Village Church on January 15, with a unique photography exhibit by young Palestinian artists and media students from Dar al-Kalima University College of Arts and Culture in Bethlehem.

Palestine: Unlimited presented the winners from Dar al-Kalima’s first photographic competition, in honor of the first female Palestinian photographer, Karimah Abboud. Images from the ten finalists were selected to help break stereotypes and share a realistic view for the public to experience Palestine’s true nature.

Surrounded by Israel’s Separation Wall since 2002, the traveling exhibit displayed moving and thought-provoking images of life in today’s Bethlehem. The collection of pictures also showcased the realities experienced by the Palestinian people. This year, Palestine has endured its 50th year of military occupation, the longest occupation in modern history.

The creativity and skills from students, and the positive spirit and potential they represent, shine through their profound imagery. Dar al-Kalima University is funded primarily by Lutheran and other communities of faith outside of the Holy Land, and offers an excellent education for Palestinian Christian and Muslim youth alike. The vision for the institution builds hope through imaginative, proactive, positive programs to achieve peace, justice, and fullness of life for all people in the Holy Land.

“The mission of BrightStars of Bethlehem is to raise awareness,” said Chase. “Raise those stories up in the spirit of hope rather than a story of despair.”

Despite people’s disbelief and critique of creating a university dedicated to arts and culture amid occupation, BrightStars was born 25 years ago out of the aspiration of Rev. Dr. Mitri Raheb who said, “In the midst of conflict, art creates the room to breathe.”

Today, Bright Stars of Bethlehem has an expanding network of supporters in the U.S. that impact the lives of over 60,000 men, women, and children in Palestine, and over 500 students at the university.

The photographs by young Palestinians reveal their talents and hopes that thrive behind, and in spite of the Separation Wall. The photo used to promote the exhibit features a young girl reaching upwards against the background of a wall, beyond the limitations of her situation. The poignant symbolism illustrates the hopes and dreams of a child’s unlimited aspirations, and a spirit of determination to rise above her limiting circumstances.

“Just look at the pictures. They tell a story of pain and suffering, but also of perseverance,” said Hanan S., a Palestinian-Dominican attendee who remarked how clearly the suffering could be seen in the images.

Other photos portrayed the traumas of home demolition; the disappearances of loved ones; strong, proud, aspiring youth and weary elders at work and prayer; perplexed, and innocent children robbed of their childhood by the ubiquitous military presence. But their strength of character and humanity infuses all the images.

Adding a local connection to Milwaukee was Brienz, who had her photographic work featured alongside Palestine: Unlimited. Her art pieces included an image of two women in modern abayas or robe-like dress, taking a selfie in front of the Eiffel Tower.

“It feels really good. The photos collaborate well together. It is an honored to be a part of this exhibit,” said Brienz. “The movement is really powerful.”

Brienz has been a part of the Village Church congregation for her entire life, and previously displayed her images. But the special event provided her with a chance to share her message alongside an important exhibit. One of her goals is to educate the community, so that people know there are more parts to a culture than what is seen on the news. Brienz hopes that her work can help accomplish that.

“I think they are awesome,” said Esteban Ali, a visitor who noted the similarities in Brienz’s and the exhibit. “She did a good job trying to bring life to things we see as mundane. Everybody has an oppression. If not now, then at some point. It’s that same struggle.”

Prints of the Palestine: Unlimited photos, presented during the nationwide traveling exhibition, are also available during the event. Those funds are used to help financially support the art students for their work, and build a scholarship fund for other young students.

After the Village Church, the exhibit moves to the River West Jazz Gallery Center for the Arts from February to March, and then to the Islamic Resource Center where it will open on March 29 and run through the first two weeks of April. Further displays are planned in Milwaukee and around the country in the months to follow. 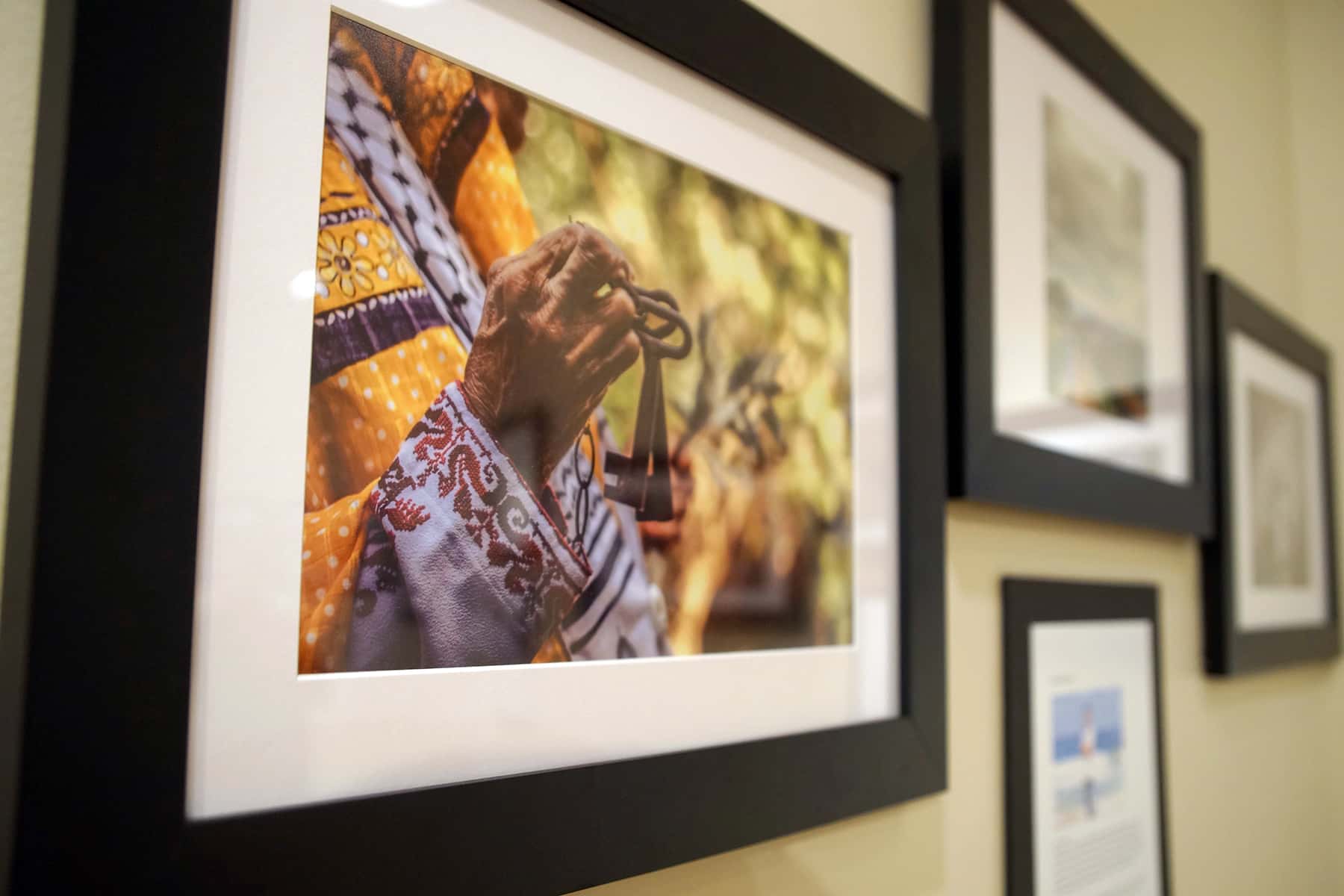 Join us for the opening reception of Palestine Unlimited , an exhibition (Feb 23 – March 16) featuring award-winning photographs by Palestinian artists. Aimed at defying stereotypes through art, this exhibit affords Palestinians the rare opportunity to depict their reality in their own words- or images.

All works for sale with proceeds benefiting Bright Stars of Bethlehem, a U.S.-based organization dedicated to educating the next generation of creative leaders in Palestine.

Why do we picket?
1. To educate people on the inhumane conditions at MSDF
2. To memorialize the 17 people who have died in MSDF since it opened.
3. To let WI taxpayers know that each day someone spends in MSDF for a crimeless rule violation it costs us $100.84 vs $40 to treat that person in the community where their job, housing & support systems stay secure.
4. Former Governer Tommy Thompson has said building MSDF was a mistake. Its time the state corrects that error.

Parking is metered or nearby public lots. If you don’t mind walking a couple blocks, its often easier to find free parking on the other side of the freeway.

We’ve been holding down this monthly picket since the spring of 2017. A coalition of Milwaukee organizations have joined up to shut down MSDF. This facility is a building within a building, where captives have no access to fresh air or sunlight. They are triple bunked in lockdown cells for over 20 hours a day. There is no outdoor rec. The facility was built and is run using funds that should be used for diversionary programs to keep people out of jail, instead it’s being used to keep them on supervision under arbitrary and vindictive probation and parole officers.

We are organizing this protest on every 23rd (unless that lands on a weekend, when there’s less foot traffic). The National Religious Campaign Against Torture has called for actions on the 23rd of every month (to bring attention to 23 hour a day lockdowns). http://www.nrcat.org/about-us/take-action-current-legislation/563-together-to-end-solitary

If you haven’t signed the petition yet yourself, please do here: https://actionnetwork.org/petitions/its-time-to-close-milwaukee-secure-detention-facility-msdf

In March 1968, Martin Luther King Jr. addressed a mass meeting of over 10,000 people in Memphis, Tenn., in the midst of a strike of 1,300 black sanitation workers. He told them, “All labor has dignity.”

Today, as we celebrate the civil and labor rights activist’s life, we must uphold that belief and stand up for those who work hard every day, especially as thousands of federal government workers are currently furloughed and unable to make ends meet. In 2019, no worker in the United States should have to wait in a food pantry line or sell family heirlooms to pay their bills, but that is what we are seeing as the current administration holds workers hostage in an attempt to fund a symbol of racism and disunity.

We also see an ever-growing racial wealth divide in this country, one that Dr. King dedicated his life to eradicating. We in the labor movement must commit to continuing this work, as the stakes are higher than ever.

Unions must also stand up for Americans who are victims of racial, ethnic, and religious hatred and violence, a phenomenon that, unfortunately, is all too common in the United States. Hate crimes against minorities, including people of color, increased in 2018 for the third year in a row. Labor must consistently condemn these despicable acts and fight back against inequality of all forms just as we fight back against unfair trade.

Dr. King had a dream, one where all workers and all Americans are treated with dignity. Let us rededicate ourselves to doing the hard work necessary to make that dream a reality.

The USW represents workers in North America employed in many industries that include metals, rubber, chemicals, paper, oil refining and the service and public sectors.

This is the next preliminary hearing for Chrystul. It will likely be short, probably the lawyers arguing for their motions regarding the release of discovery evidence to the defense and the judge possibly making a decision on that.

Chrystul will be there, riding a cold prison bus almost 2 hours there and back from Taycheedah, so it would likely boost her spirits to see some supporters in court.

A note on court etiquette: try to dress nice (not formal, but presentable), take off hats when you enter the room, no using phones or talking while court is in session (when the judge is in the room). Some members of Volar’s family showed up at the last hearing, so we should try to sit together as a group. Be polite, but try to avoid interaction with them.

We want to show the judge and the DA that Chrystul is loved and missed, without making them feel disrespected or antagonistic.