Why is Robin Vos rushing to change state laws before the newly elected Governor takes office?

On November 6th, Wisconsin voters elected Tony Evers as their Governor. The next day Robin Vos told the press he was working to convene a Lame Duck session so the Legislature could take away the new Governor’s authority over a range of key state issues. As any coach would tell his team, you can’t change the rules of the game just because you’re losing. It seems Robin Vos is doing exactly that and he is in a hurry to get it done.

A diverse group of civic, religious, labor, and community organizations have formed an Ad Hoc Committee on Governmental Integrity to challenge the Vos plan.

To show the LA school district that UTLA has support not only from the Los Angeles community but also from unions and our members around the country, please read the statement attached below and sign-on to show your support by this Saturday, December 1st.

Educators in Los Angeles are asking the district to address many of the same issues that we see in our schools every day, in every corner of the nation, from West Virginia and Oklahoma to Arizona and Colorado. UTLA is fighting for smaller class sizes, less testing and more teaching time, improved school safety, support for community schools, salaries that keep up with inflation, and increased funding for schools.

In August, 98% of union members voted to authorize a strike, should the district fail to address austerity conditions in their public schools. As the year inches toward its close, the possibility of a strike is growing more certain.

Show your support for these teachers by reading the statement attached below and signing-on to it by this Saturday, December 1st.

On Monday, November 26, 2018, Honduran authorities fired massive amounts of tear gas and opened fire with live bullets on a large protest march in Tegucigalpa to mark the one year anniversary of the November 2017 election fraud. At least 3 people were wounded, one of them, Geovanni Sierra, was working as a reporter for UNE-TV when he was shot. This happened one day after the US Border Patrol shot rubber bullets and quantities of tear gas across the border into Mexico at the refugees, most fleeing from Honduras, who are being held back from entering the US. Only 2 days before that incident the brother of the defacto president of Honduras, Juan Orlando Hernandez was arrested at the Miami Airport for being part of the narcotics trafficking organized crime in Honduras. These three incidents in 4 days, are just the tip of the iceberg of the crisis of US policy, and a dictatorial regime and its violence and corruption.

On November 26, 2017, Honduras went to the polls in an election that was a face off between the right wing National Party sitting president JOH (who ran for reelection unconstitutionally) and the Alianza, an alliance between the anti-coup/resistance Party LIBRE and members of the Anti-Corruption Party. But, instead of the election allowing Honduras to take a new path to restore democracy and make the country livable for the people, blatant election fraud,  a new wave of repression and continuing impunity and corruption plunged the country even deeper into crisis.

That crisis began with the US backed 2009 coup, and after the 2017 election (also supported by the US), it is deeper and broader than ever before. It is this crisis that is pushing thousands of Hondurans out of their country.

We demand that the US and Canada stop all support for the Honduran regime. We support the Honduran people’s demand for freedom for all the political prisoners and for justice for all the victims of the regime. We demand that the US stop the repression against the refugees, open the borders to those being pushed out of their countries and end the militarization of the border and violence against all migrants and refugees.

The United Nations International Day of Solidarity with the Palestinian People will be celebrated in Milwaukee with a vigil at the Federal Building on 3rd and Wisconsin Avenue at 4PM on Thursday, November 29, 2018. Concerned citizens are asking the federal government to withdraw the $3 billion in taxpayers’ money provided each year to Israel for military weapons used against an unarmed Democracy, the country of Palestine.

With the United States assistance, Israel routinely uses bombs, snipers, bulldozers, and settlers to carry out a brutal occupation and destruction of Palestine. Using Israeli Defense Forces on Palestinian streets, snipers on top of walls, and check points and passes prohibiting Palestinians’ freedom of movement, Palestinian people live under a violent apartheid system.

The 1.8 million people of Gaza live in an open air prison in their own country. The people of Gaza are even denied free access to the rest of their country, the West Bank.

In addition to military controls and bombing, for the past decade Israel has imposed a land, air and sea blockade of Gaza, stopping any country from providing aid to the Palestinian people.

The blockade stops all food, medicine, building materials and other humanitarian aid from entering this country under siege. The World Bank estimates that the GDP losses caused by the blockade since 2007 is above 50%. Gaza’s exports virtually disappeared since the imposition of the blockade.

In May, 2018 Gaza citizens organized a non-violent “Great March of Return” along Israel’s border fence to demand an end to the blockade of Gaza. Amnesty International reported that the Israeli Defense forces (shooting protestors from on top of walls), killed over 150 people and injured at least 8,700 others, including 1,849 children, 424 women, 115 paramedics and 115 journalists. Of those injured, 5,814 were hit by live ammunition. According to Israeli media, one

No people on Earth should be subjected to a violent system of terror and war carried out against an unarmed country by their neighbors. We demand an end to the US assistance to Israel which makes all of us partners in Israels’ crimes against Palestine.

This year’s 16th Annual Dr. Martin Luther King, Jr. Day Rally & March comes at a time of rising hatred, bigotry and military conflict both inside the United States and around the world. The Detroit MLK Day Committee is once again requesting your financial support to continue this tradition which mobilizes the largest social justice gathering in the whole of southeastern Michigan.

On Monday, January 21, 2019, the  will commemorate the 90th birthday of Dr. King. This year’s program will feature keynote speaker Ms. Gail Walker, the Executive Director of the Inter-religious Foundation for Community Organization (IFCO) based in New York City.

IFCO has been in the leadership of various community and international campaigns since its founding in 1967. In late April 1969, IFCO sponsored the National Black Economic Development Conference (NBEDC) at Wayne State University (WSU) which put forward the first modern-day call for reparations to be paid to African Americans for the stolen labor during slavery and the national oppression in which they have lived under since the conclusion of the Civil War (1861-1865).

In addition, 2019 represents the 50th anniversary of the further emergence of Black workers in the leadership of the Civil Rights and other emancipatory struggles. 1969 witnessed the formation of the League of Revolutionary Black Workers (LRBW) in Detroit and the Charleston, South Carolina hospital employees strike which was led by African American women with the intervention of Mrs. Coretta Scott King, the heir to the legacy of Dr. King after his assassination on April 4, 1968.

These events prefigured the ongoing struggle on behalf of low-wage workers and the imperatives of eliminating poverty in this country. The recent efforts by D15, Unite Here and other labor organizations demanding justice for marginalized workers is a major advancement in the movement for full equality and self-determination.

In addition to its work on domestic issues, IFCO has coordinated the education of over 150 students who studied medicine for free at the Latin American School of Medicine (ELAM) in the Republic of Cuba. Numerous youth from Detroit along with other cities have taken advantage of this program. The recruitment of these young people was initiated by Rev. Dr. Lucius Walker, the founder of IFCO, as well as former City Council member Rev. Dr. JoAnn Watson.

You are cordially invited to attend this 16th Annual Detroit MLK Day event at our new location of the St. Matthew’s-St. Joseph’s Episcopal Church located at 8850 Woodward Avenue between King and Holbrook in the city’s North End neighborhood. This venue which is a historic institution in Detroit having played an integral part in the 19th century Underground Railroad and the Northern High School Student Strike of April 1966, among other important events, will place us in the heart of the city in a community where gentrification, water shutoffs and tax foreclosures continue to take a serious toll.

The program begins at 12 noon in the sanctuary and will include music and brief messages from cultural workers and activists from throughout the region.

At about 1:30 p.m., the Detroit MLK Day March for Jobs, Peace and Justice will begin. At 3:00 p.m., a special cultural program of poetry and music will take place at the church.  A healthy community meal will be served.

Join us as we continue our efforts to pass legislation to restore driver licenses to immigrants and low-income people. We’ll be sharing updates on our progress so far and planning our upcoming actions. ¡Sí se puede!

La Caravana: Rally to support refugees seeking asylum in the US

Showing international socialist unity and solidarity, Cuban President Miguel Diaz-Canel completed his first overseas diplomatic mission since speaking at the United Nations in September. His destinations included visits to the socialist states of the Democratic People’s Republic of Korea, China, Vietnam and Laos, as well as Russia and France. Below are excerpts taken from the Cuban news agency Prensa Latina describing this historic tour. 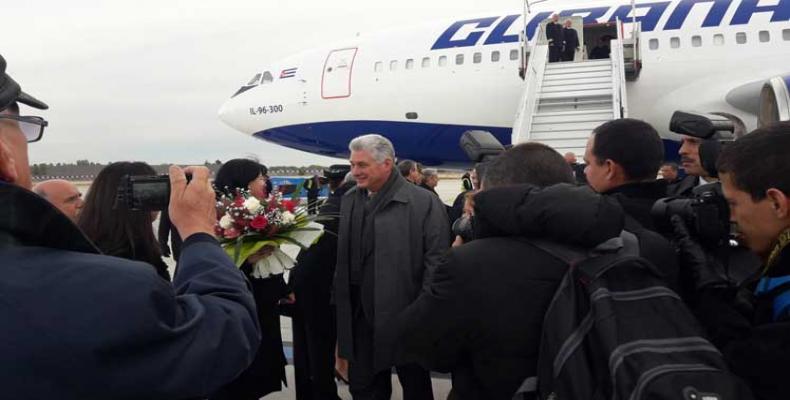 Sana’a (GPA) – Washington has chosen to diverge from its European allies and continue support for the Saudi led-coalition against Yemen. Following a White House statement that reaffirms US commitment, the Saudi coalition has continued with its assault on Hodeidah port and civilians in Yemen.