At 3:00am on Wednesday morning ATU Local 998 transit workers will go on strike to demand adequate time to allow for bathroom breaks on shifts, as well as halting plans to hire part time workers, who do not pay into the state retirement system or receive health care benefits. MTEA workers stand in solidarity with these striking workers and their demands and call on others to join them on the picket line.

****We will release picket line locations and times once they become available.****

Pam Africa, Minister of Confrontation for MOVE and Chairwoman of the uncompromising International Concerned Family and Friends of Mumia Abu-Jamal, toured Milwaukee and Madison Wisconsin June 26-27 speaking and visiting with a variety of progressive and revolutionary activists. During the tour called “Conversations with Pam Africa: The MOVE 9, Mumia Abu-Jamal, Political Prisoners & State Violence,” she spoke at the National Coalition Of Blacks For Reparations In America (NCOBRA) national conference and at the Nation of Islam Mosque No. 3 in Milwaukee and at a Young Gifted and Black coalition sponsored event in Madison. Other stops included a Wisconsin Coalition to Normalize Relations With Cuba event for the Pastors For Peace caravan to Cuba and an interview with the people’s radio station Riverwest Radio.

Everywhere Africa went she declared her solidarity with those fighting all forms of austerity including union busting in Wisconsin and worldwide and made special mention of youth and students fighting against all forms of capitalist state violence including racist police terror, starvation and imperialist wars. Africa’s appeals for Mumia Abu-Jamal were met with renewed vigor to fight for the life of this internationally renowned political prisoner who the state is presently trying to murder through medical neglect. Africa also described in detail at every tour stop, the unrelenting war of Pennsylvania state officials against the MOVE organization including the framing up of the MOVE 9 in 1978 and the suspicious deaths of two MOVE activists in prison and the bombing of a MOVE home May 13, 1985 that killed 11 men, women and children with city officials allowing a fire to rage that burned down 62 Black owned homes in the immediate vicinity of the bombing.

A variety of organizations supported the tour including the sponsors Wisconsin Bail Out the People Movement and the youth group Fight Imperialism Stand Together (FIST) which sent delegations from their Rockford, Illinois chapter to all of the tour events. Organizations such as the the Latin American Solidarity Committee and the Madison chapter of Socialist Alternative assisted in publicizing the tour through social media. At the Nation Of Islam Mosque No. 3 June 27 event, the speakers panel included representatives from the Committee To Stop FBI Repression and Freedom Road Socialist Organization (Fightback) raising the case of Palestinian freedom fighter Rasmea Odeh, the Nation Of Islam, the Pan African Revolutionary Socialist Party, Rockford FIST, Wisconsin Bail Out The People Movement, Wisconsin Jobs Now and Workers World Party.

Resolution
Support for the International Longshore Association, Charleston, South Carolina
June 25, 2015
WHEREAS, On June 17, 2015 nine (9) defenseless Black lives were taken, including Rev. Clementa C. Pinckney, State Senator of South Carolina and ILA Local 1422 member Tyrone Sander’s son and aunt, in an horrific act of racial terror at Mother Emanuel AME Church in Charleston, South Carolina; and,
WHEREAS, The alleged white supremacist killer specifically selected Mother Emanuel because it is an iconic Black Church  with a history of struggle for freedom and democracy for African American people that dates back to the 18th century and in more recent history the site for organizing civil rights marches in the 1950s and 1960s; and
WHEREAS, The June 17, 2015 killings recall the bombing of a church in Birmingham, Alabama that killed four African American young girls and galvanized the Civil Rights Movement of the 1960s; and
WHEREAS, This horrific act of racial terror must be viewed in the broader context of the State sanctioned murders of African American unarmed women, men and children across the Nation by police and vigilantes such as the death of Walter Scott in North Charleston, South Carolina, Jordan Davis and Trayvon Martin both in Florida; and
WHEREAS, Historically Labor has played a leading role in the Civil Rights Movement in this country; and
WHEREAS, In September 1967 Rev. Dr. Martin Luther King, Jr. addressed the membership of ILWU Local 10 acknowledging the ILWU’s support of the Civil Rights Movement and was made an honorary member of Local 10 seven (7) months before his assassination; and
WHEREAS, On June 18, 2015, Rev. Bernice King, daughter of Rev. Dr. Martin Luther King, Jr. said, “We must interrupt business as usual and change the trajectory of our Nation …”; and
WHEREAS, On June 18, 2015 ILA International President Harold J. Daggett, in the ILA News issued a statement, “Let us honor the deaths of these nine parishioners by recommitting ourselves to eliminating all forms of hatred, and bigotry in our nation”; and
WHEREAS, The ILA and ILWU represent the strongest sector of organized labor vital to the movement of 95% of the world’s goods, a $6 trillion industry;
THEREFORE BE IT RESOLVED, That this Resolution be sent to all longshore locals on the West Coast;
THEREFORE BE IT FURTHER RESOLVED,  Local 10 send $1000 (one thousand) to Mother Emanuel AME Church to assist with burial and/or church expenses due to this racial assault on their premises; and
THEREFORE BE IT FINALLY RESOLVED, The entire ILWU Longshore Division prepare to support the ILA in any solidarity action they may call in response to these killings; and that Local 10 provide expenses for at least three members to travel to Charleston, SC. in order to participate in any such action.
Submitted by,
Brother Clarence Thomas, #8718

The Wisconsin Bail Out The People Movement and FIST (fightimperialism.org) present… 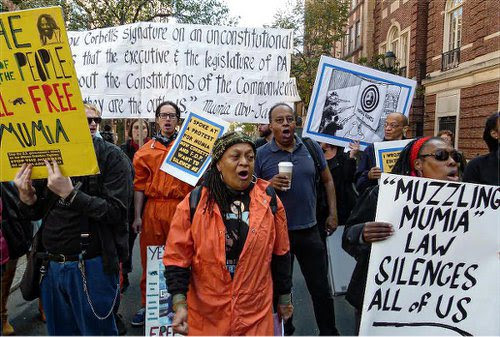 Pam Africa, Minister of Confrontation for MOVE and Chairwoman of the uncompromising International Concerned Family and Friends of Mumia Abu-Jamal, will visit Madison and Milwaukee Wisconsin June 26-27.Pam Africa is a longtime political activist and MOVE leader. The MOVE organization has faced government persecution for decades including having numerous members unjustly placed in prison since the late 1970’s and a bombing of its home by city officials and police in 1985 that killed 13 of its members.Sister Africa will demand the freedom of political prisoners Mumia Abu-Jamal, Leonard Peltier and the MOVE 9 and speak out against state violence against communities of color such as the massacre of 9 African Americans in Charleston, South Carolina by a white supremacist terrorist.

During her speaking tour, Ms. Africa will be joining those fighting back against union-busting and austerity in Wisconsin.

Events free and open to the public

Visit and talk with Pam at this event: